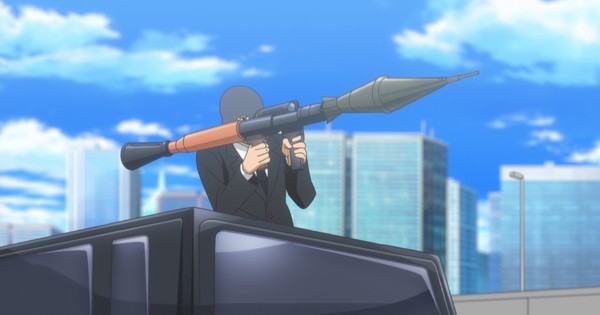 Political bribes, explosive asssassinations, sultry femme fatales, amnesiac prodigies–just another average day in the world of Birdie Wing -Golf Girls’ Story-. It says a lot that even a slower, board-setting episode of this series is a blast to watch. On the scale of the show so far, this is a comparatively tame installment, mostly laying the groundwork for next week’s deadly showdown. On the scale of your average anime, however, this is still Birdie Wing, i.e. an unhinged riff on sports stories, unbeholden to the rigid standards of good taste or plausibility.

The golf mafia angle fully soaks up the spotlight this week. Eve, having been ripped away from virtual reality right as she was about to exchange vows with Aoi, does her best to contend with the impending demolition of her home, an unintended consequence of the underground game she won for Catherine. It’s a legitimately compelling twist of dramatic irony. Eve, essentially, made a deal with the devil in order to play against Aoi, and now she’s reaping the fetid rewards. Does she embroil herself further into the employ of the golf mob in order to ensure the safety of her friends and orphans, or does she seek revenge and fight back in a different way? It’s a solid conflict, and it’s easy to imagine the risks and rewards of either side, making Eve’s future all the more uncertain.

The inter-mafia politics aren’t that remarkable compared to any other crime narrative, but they’re exquisitely enhanced by the knowledge that this all takes place in an anime with the subtitle “Golf Girls’ Story.” There is questionably legal casino development…that hinges on golf. There is the assassination of a major city council member…because of golf. At one point, a henchman explicitly says that they want to resolve this conflict with golf because it started with golf. It’s insane logic that exists solely to justify more and wilder showdowns between the bunkers, and it’s spectacular. You should take this as an object lesson in how important it is to have some sort of goal or structure in mind when you write. Birdie Wing, despite its chaotic feel, is built around constructing these golf matchups with higher and more dramatic stakes, and that’s why it works so well.

Birdie Wing also works well because it knows not to squander a good character when it has one. That’s right, Vipere is back, and she’s still every bit the lovable loser weirdo I fell for. The funniest bit in the whole episode is how we see, in real time, the slow development of her realization that Nicolas let her live on purpose. Without Eve’s input, there’d be nothing rattling around in the skull of hers except golf, poison perfume, and Hot Topic coupons. Her lasciviously gross come-ons to Nicolas’ henchman, combined with the transparency of her motives and the immediacy of their effectiveness, make for a guffaw-worthy moment too. And of course, I can forget all the effort she puts into that classic training montage–effort that gets immediately undermined by Eve’s memories of her hardcore golf boot camp. Vipere can’t win, and that’s why she’s the best.

In the absence of a big dumb golf match or a big gay moment between Eve and Aoi, this is actually a good week to reflect on how casually funny Birdie Wing can be. Some of it is understated–the way Rose polishes her golf clubs like they’re rifles, the turtles crawling around her office, the revelation that her base of operations is the backroom of a golf apparel store. Christine is nude for most of her appearances this week, which was likely not done solely for the absurd angle, but is amusing nonetheless. And then we have that great scene of Lily tearfully piling up her Gunpla, willing to make the ultimate sacrifice if it means she, Klein, and the adorable orphans can hold onto their shop just a little longer.

Birdie Wing additionally shows no fear veering into over-the-top melodrama to inform its characters and conflicts. Did Klein and Lily really need to have backstories as underage prostitutes in order to make them sympathetic? No, the stakes were plenty clear and adequate already, but on some level, I have to respect the series’ commitment to no half measures. Eve, as another example, not only has no family, but possesses no childhood memories and no links to her past at all besides a first name and a preternatural gift for golf. Rather than fuel speculation, this only further convinces me that she and Aoi have some past connection, most likely as long lost sisters. Eve’s mentor Leo will likely show up at one point to elucidate all that, but rather than be disappointed at how loudly the anime seems to be announcing these twists, I’m eager to see how it will one-up them.

And what a cliffhanger to leave us dangling on! As Eve pictures Aoi’s soft visage amidst the billions and billions of stars in the Milky Way, she knuckles down for a fight to the death with Rose. A fight to the death–through golf. If it turns out that all of Rose’s circuitous and Machievelian machinations were done solely to set up this one-on-one match with Eve, I think that’s the dumbest, pettiest, and best possible outcome. So much horror, manipulation, and bloodshed in the name of finding out who can hit a tiny ball into a very distant and very tiny hole in the fewest number of strokes. That is, undeniably, golf.


Steve is a world-renowned golf expert and commentator, but if you just want to read his thoughts on anime and good eyebrows, then there’s always Twitter. Otherwise, catch him chatting about trash and treasure alike on This Week in Anime.