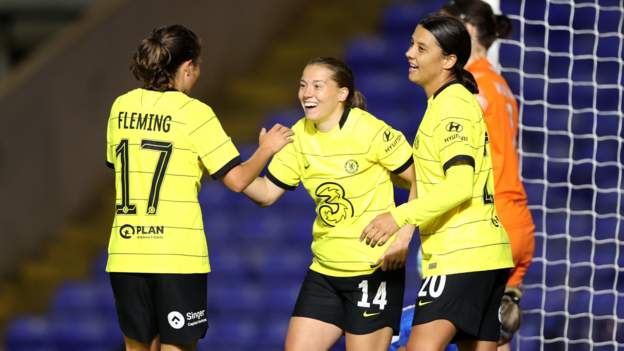 Chelsea’s star double act Sam Kerr and Fran Kirby came off the bench to fire Emma Hayes’ side into the semi-finals of the FA Cup.

The Women’s Super League champions toiled in the first half and missed a penalty through Beth England.

But Kerr made an immediate impact with a neat header and then Kirby scored twice in two minutes before Pernille Harder sealed victory.

Chelsea will now face Manchester City in the last four.

Hayes made eight changes from the team that thrashed Manchester United 6-1 on Sunday and they looked toothless early on.

England spurned a golden chance when she blazed her spot-kick over the bar midway through the first half.

But, when the reinforcements were summoned, they responded in clinical fashion.

Kerr and Kirby have nine goals between them already this season as Chelsea seek to win their first FA Cup since 2016.

They face Gareth Taylor’s City in the last four for the fifth time in seven years, which Hayes could hardly believe after being told of the draw at full-time.

“No way. Did we get Manchester City again?” Hayes asked. “I can’t believe that. Who draws the hat? It has to be Arsenal. Amazing.

“I don’t care where it is or who it is because we’re in the semi-final. I can’t wait.”

‘Things going against us’

Birmingham boss Scott Booth said it was an “excellent” performance from his side, but admitted Chelsea’s “big guns made the difference”.

“We can take a lot of things out of the game,” he added.

“It doesn’t feel like a 4-0 again. Things are going against us at the moment. It came down to a few individual errors and when you make errors against quality they will make them cost you.”