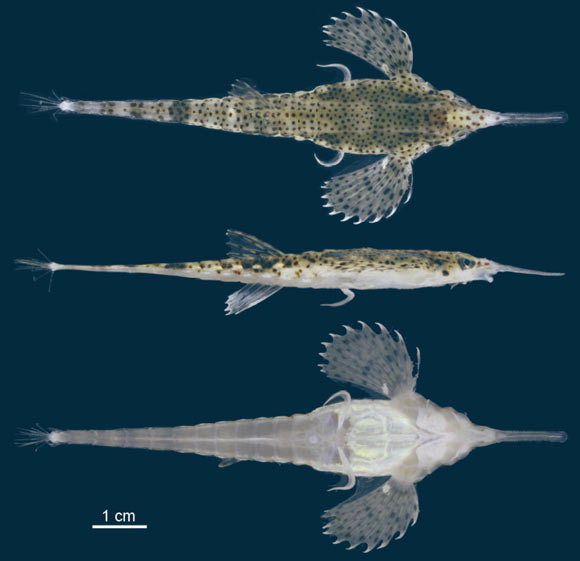 Marine biologists have discovered a new species of the seamoth genus Pegasus living in the coastal waters of Xiamen City, Fujian Province, China.

Seamoths are members of Pegasidae, a small family of ray-finned fishes within the order Syngnathiformes.

There are only seven species of seamoths in two genera, Pegasus and Eurypegasus.

They are widely distributed in the temperate and tropical waters of the Indo-Pacific, ranging from South Africa to Hawaii.

Seamoths are notable for their unusual appearance, including flattened bodies, the presence of large, wing-like fins, a very long snout, and a body encased in thick, bony plates.

Members of the genus Pegasus (named for a creature from Greek mythology) differ from Eurypegasus in having more tail rings, 11 to 14.

Millions of seamoths are sold each year as traditional Chinese medicine, and further research is needed to estimate their species diversity and population abundance across their distribution range.

The newly-discovered seamoth species, named Pegasus sinensis, or the Chinese seamoth, is known only from Xiamen Bay, Fujian Province, China.

This fish measures about 7.3 cm (2.9 inches) in length and has a light brown to beige body covered with dark brown to black spots.

It differs from the closely related longtail seamoth (Pegasus volitans) in both the density and color of spots present on the body surfaces.

“Based on the mitochondrial genomes of three newly sequenced seamoths used in our study, we conducted a phylogenetic analysis of Pegasidae,” said first author Dr. Ying-Yi Zhang, a researcher at the South China Sea Institute of Oceanology and the University of the Chinese Academy of Sciences, her and colleagues.

“We revealed that Pegasus sinensis and Pegasus volitans diverged from their common ancestor approximately 9 million years ago.”

A paper describing the discovery was published on July 18, 2022 in the journal Zoological Research.