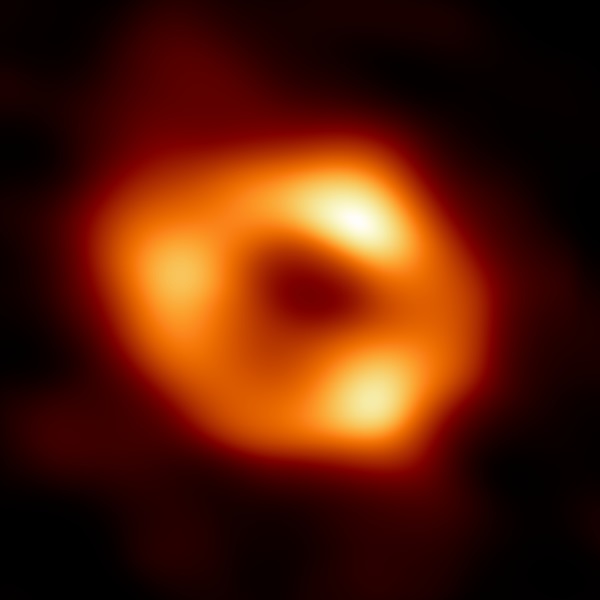 In a triumph of observation and data processing, astronomers at the Event Horizon Telescope have captured the first ever picture of the supermassive black hole at the center of the Milky Way Galaxy.

The black hole is named Sagittarius A* (pronounced “A-star”), and the reveal of its image received an international rollout this morning in simultaneous press conferences held by the National Science Foundation (NSF) at the National Press Club in Washington, D.C., and the European Southern Observatory headquarters in Garching, Germany.

The image represents 3.5 million gigabytes of radio telescope signals. “It took several years to refine our image and confirm what we had,” said Feryal Özel, an astronomer at the University of Arizona in Tucson, at the NSF press conference. “But we prevailed.”

The team published their results today in a special issue of The Astrophysical Journal Letters.

Black holes are the theorized accumulations of matter that are so dense, not even light can escape the grasp of their gravity. The “hole” itself — a singularity in spacetime — remains invisible. But astronomers have been able to study them by observing their gravitational influence on stars around them. Since the 1990s, astronomers have observed stars at the center of our galaxy, roughly 27,000 light-years away, whipping around an object that appears to have the gravitational pull of 4 million Suns.

But obtaining a direct image of a black hole itself is a lot harder. Simulations show that the disk of gas around the singularity heats up and begins to glow just before it crosses the event horizon. The black hole bends light rays around it and absorbs light that strays too close, casting a shadow against the disk. Until recently, however, this had never been seen.

Then, in 2019, the Event Horizon Telescope (EHT) — a collaboration of radio telescopes around the globe — released the first ever image of a black hole: the central black hole of the galaxy M87, about 53 million light-years from Earth. By using a technique called very long baseline interferometry (VLBI), the EHT’s radio telescopes, scattered around the world, could work together to achieve the effective resolution of a telescope the size of the planet.

The data that went into making the M87 and Sgr A* images were taken back in April 2017 during the EHT’s inaugural observing campaign. Despite its distance, M87’s central black hole appears roughly the same size on the sky as that of our own galaxy’s. Though M87’s black hole is about 2,000 times more distant, it is also about 1,500 times larger.

In fact, M87’s central black hole was actually easier to image. That’s because when looking at the Milky Way’s core, we are looking through the plane of our galaxy, with the disk’s dust and gas in the way.

However, in observing Sgr A*, astronomers did have one advantage. The M87 observations could not use all eight of the telescopes that were part of the EHT at the time — the galaxy’s location in the northern sky leaves it out of view of the South Pole Telescope (SPT) at the Amundsen-Scott South Pole Station. By contrast, the SPT could not only participate in observing Sgr A*, but could do so continuously. And its location at the end of the Earth increased the resolution of the observations significantly by widening the EHT’s baseline.

The results aren’t just a pretty picture. The extent of the black hole’s shadow — the event horizon — also provides an independent check of the mass of Sgr A*. And at 4 million solar masses, it is “perfectly aligned” with the previous measurements based on the orbital motions of stars, said Michael Johnson, an astrophysicist at the Harvard and Smithsonian Center for Astrophysics. “This is an extraordinary validation of general relativity.”

This article was originally published at Astronomy.com.