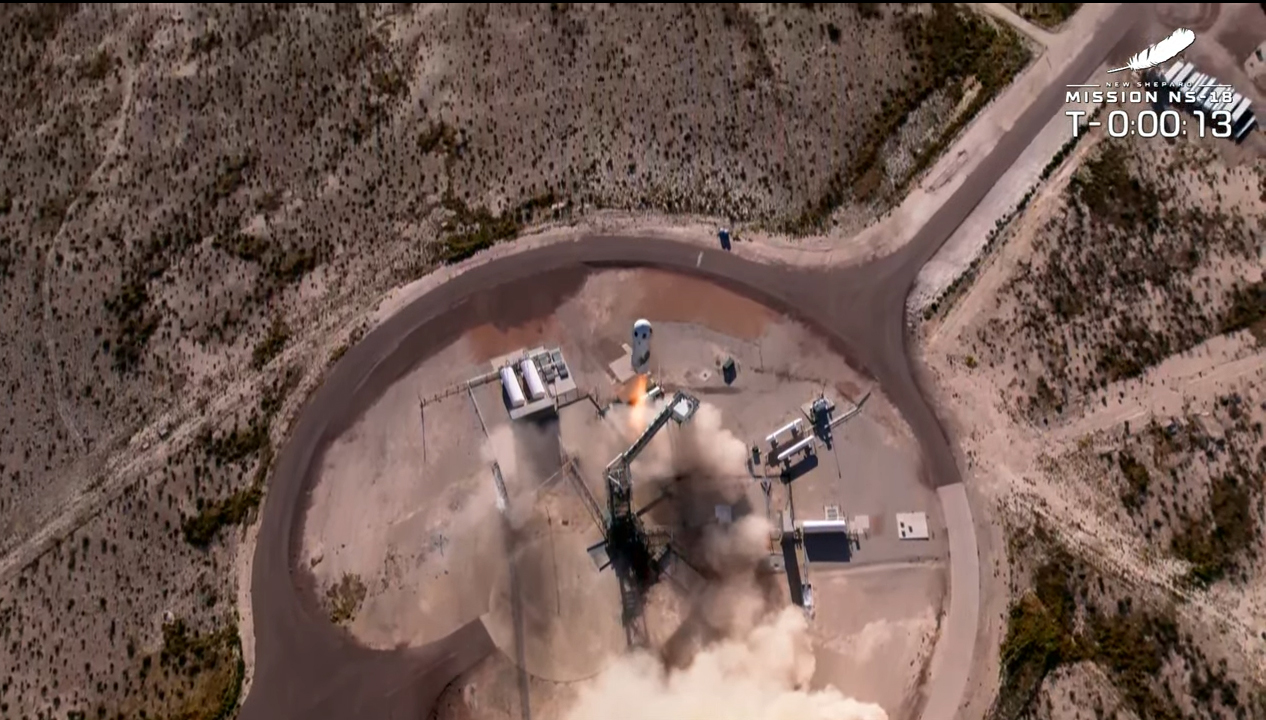 VAN HORN, Texas — William Shatner has boldly gone where no 90-year-old has ever gone before.

The famed “Star Trek” actor and three other private crewmembers launched into space today (Oct. 13) on a Blue Origin New Shepard rocket, marking the second time that Blue Origin has successfully launched a crewed suborbital mission on its vehicle for space tourism. Dubbed NS-18, it was the 18th flight of a New Shepard vehicle overall.

“That was unlike anything they described,” Shatner was heard saying via a radio link as the capsule parachuted back to Earth.

“Everybody in the world needs to do this,” he told Blue Origin founder Jeff Bezos after landing. “That was unbelievable.”

The reusable New Shepard rocket and capsule lifted off from Blue Origin’s Launch Site One, just north of the West Texas town of Van Horn, at 9:49 a.m. local time (10:49 a.m. EDT; 1449 GMT). After a 10-minute flight, during which the crew experienced about four minutes of weightlessness in outer space, the capsule safely delivered the crew back to Earth with a parachute-assisted landing near Blue Origin’s West Texas facilities.

The rocket, which separated from the capsule after lofting the crew to space, also successfully executed an upright landing about seven minutes after liftoff, touching down just 2 miles (3 kilometers) north of the launchpad. The capsule reached a max altitude of nearly 66 miles (106 km), 4 miles higher than the widely recognized boundary of space.

Shatner is now the oldest person to have ever flown to space, beating the record set by the 82-year-old aviation pioneer Wally Funk, who flew on Blue Origin’s first crewed flight with the company’s founder Jeff Bezos on July 20.

Shatner, aka Captain Kirk, is however not the first “Star Trek” actor to fly to space; that title goes to NASA astronaut Mae Jemison, who appeared in an episode of “Star Trek: The Next Generation.” (Jemison, who served as a mission specialist on the space shuttle Endeavour in 1992, was also the first Black woman to fly to space.) The ashes of the late actors James Doohan, who portrayed Scotty on Star Trek, and Majel Barrett Roddenberry  (who voiced the computer and portrayed Lwaxana Troi on The Next Generation, have also been launched to space, as have those of Trek creator Gene Roddenberry.

“It was incredible,” de Vries told Bezos after launch, adding that he was still processing the experience.

While Boshuizen and de Vries paid for their seats on New Shepard — Blue Origin did not say how much they paid — Powers joined the mission as part of her professional role at Blue Origin. Before taking on her current position at the company, Powers served as an engineer and a space lawyer, and she was previously a flight controller for NASA’s International Space Station program at the Johnson Space Center in Houston.

Just one hour before launch, Blue Origin’s Crew Member Seven Sarah Knights  presented each passenger with a challenge coin signifying the completion of their training. The coin presentation, which Blue Origin webcast live, is a new tradition by the company. Shatner had a bit of fun with the coin, offering to flip it to decide whether to launch.

Bezos then drove the crew to Launch Site One in an electric Rivian truck, with Shatner in the center seat like he would take on the bridge of the USS Enterprise on “Star Trek.” Bezos accompanied the crew up to their capsule, where they rang a ship’s bell as they crossed the gantry to New Shepard. After the flight, Bezos presented each of the four crewmembers with Blue Origin astronaut wings just after they exited their capsule at their West Texas desert landing site.

“Okay, guys, we have four astronauts before you,” Bezos said.

During their flight, the crew traveled just above the Kármán line, an internationally recognized boundary of space, which is about 62 miles (100 km) above sea level.

Shatner was visibly moved by the experience, wiping tears from his face as he tried to describe it.

“What you have given me is the most profound experience I could ever imagine,” Shatner told Bezos after launch.

Blue Origin plans to eventually start launching regular space tourism flights on its New Shepard rockets, though the company has not yet said when it will start selling tickets — or how much those tickets will cost.

The company auctioned off a seat on its inaugural flight with Bezos in July, and that seat sold for $28 million. Blue Origin did not disclose how much the paying customers of NS-18 spent on their tickets. Blue Origin’s competitor Virgin Galactic is currently selling suborbital flights on its space plane for $450,000 per seat.

Those wishing to buy a ticket on a New Shepard flight can sign up here to “receive early access to pricing information and tickets,” Blue Origin’s website states.

Wednesday’s launch came amid a somewhat turbulent time for Blue Origin, which is engaged in a public lawsuit with NASA over the agency’s selection of rival SpaceX for astronaut moon landers. The company was also accused of fostering a toxic and unsafe work environment, by a group of 21 past and current employees, in an article posted to the website Lioness.

Blue Origin disputed those claims, telling Space.com in an email that the company “has no tolerance for discrimination or harassment of any kind.”

Editor’s note: This story has been updated to include new comments from William Shatner and Jeff Bezos about Blue Origin’s NS-18 launch, as well as official statistics for the launch time and altitude.