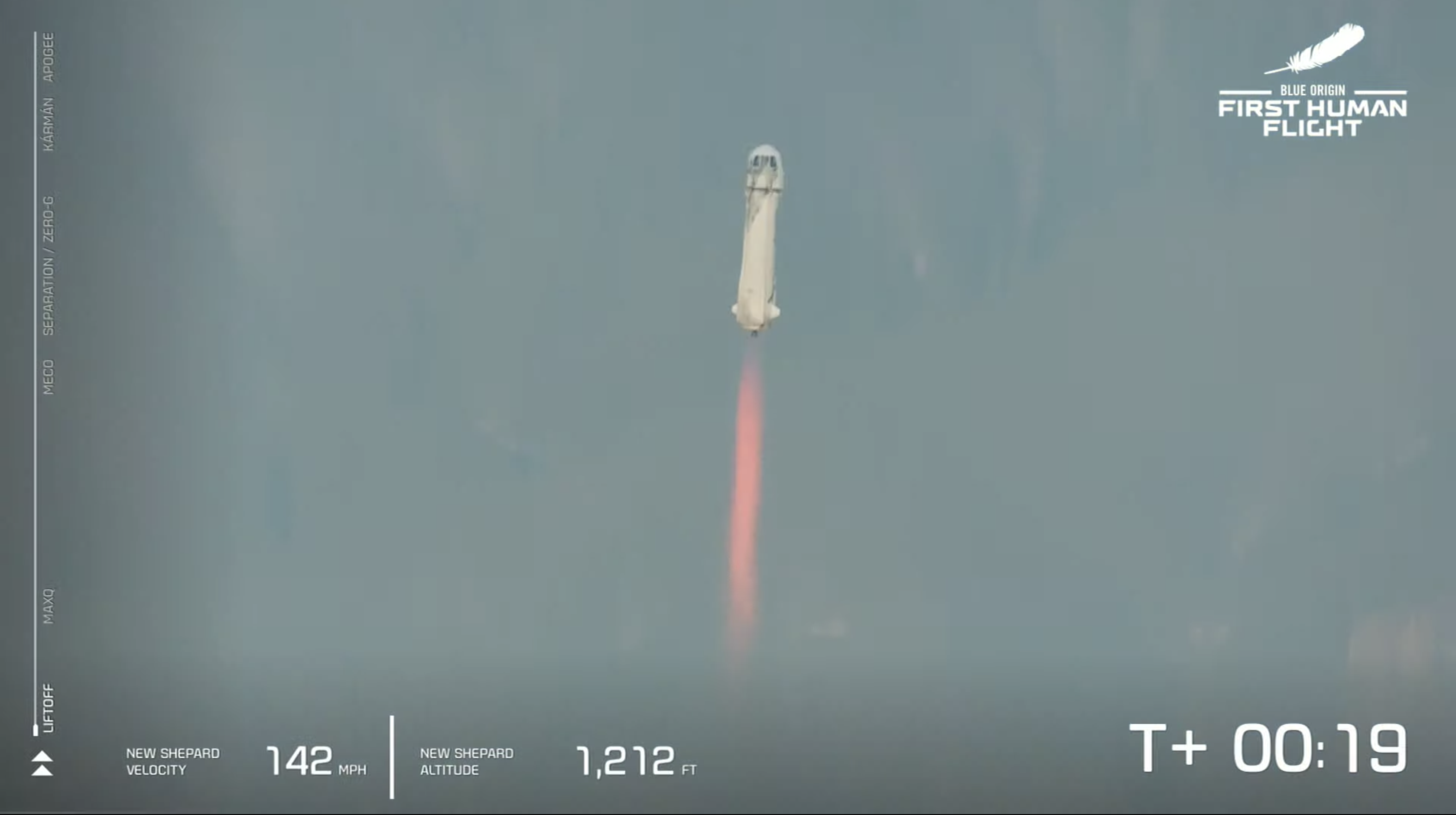 Blue Origin made history when four passengers, including Jeff Bezos, lifted off and made it to space aboard New Shepard.
(Image credit: Blue Origin)

Billionaire Jeff Bezos, former CEO of Amazon and founder of the private spaceflight company Blue Origin, has just accomplished something else that you will probably never do: Visit space.

The flight went farther than any commercial spaceflight has ever gone before, with the passenger capsule crossing the Kármán line (the boundary between Earth’s atmosphere and outer space, about 62 miles, or 100 kilometers, above sea level) at 9:16 a.m. EDT. Once the capsule reached the peak of its ascent, the crew experienced weightlessness for several minutes, before beginning their descent back to Earth and touching down at 9:22 a.m. EDT.

New Shepard’s capsule’s highest point was 351,210 feet (107.05 km) above sea level. The descending rocket touched down at 9:19 a.m. EDT, and the capsule landed at 9:22 a.m. EDT, about 10 minutes after liftoff. When capcom (capsule communicator) Sarah Knights checked in with each of the space travelers after touchdown, Bezos responded with “Best day ever!”

While Blue Origin dubbed all the passengers “astronauts,” only Funk actually trained to be one. In the early 1960s, she participated in a program with a dozen other American women who prepared for spaceflight, and who came to be known as the Mercury 13, according to the European Space Agency (ESA). Funk and her fellow would-be astronauts were never sent to space, but Funk still took to the skies as a pilot and flight instructor, teaching more than 3,000 people to fly and logging 19,600 flight hours, Live Science sister site Space.com reported.

In the days leading up to the launch, many on Twitter applauded Funk for finally making it to space, noting the difference between her background, experience and training, and that of the other New Shepard space travelers.

Tomorrow, Wally Funk, one of the people most prepared for space flight of any human in history, will go briefly to space, for the first time, after a six-decade wait, alongside three vastly less qualified but extremely wealthy men.July 20, 2021

Regardless of how you might feel about Jeff Bezos personally or the billionaire space race, today we should all be happy for *absolute legend* Wally Funk finally getting to fly into space—decades after proving she was more than qualified. #FlyWallyFlyhttps://t.co/IZl1m3UhwoJuly 20, 2021

Godspeed Wally Funk and those other guys! https://t.co/bOj1blbYAxJuly 20, 2021

Bezos is now the second billionaire to self-finance a personal trip to the edge of space. Earlier this month, on July 11, Virgin Galactic founder Richard Branson flew with three passengers and two pilots in a suborbital mission aboard the company’s Unity 22 spacecraft, Live Science previously reported.

While Unity 22 was a piloted flight, New Shepard was the first fully automated craft to carry civilians to space, and two of those passengers helped the mission break even more spaceflight records. At age 82, Funk is now the oldest person to have visited space, supplanting U.S. astronaut John Glenn. Glenn was 77 years old when he spent almost nine days on the space shuttle orbiter Discovery in 1998, according to NASA.

And at age 18, Daemon just became the youngest human space traveler. The previous record-holder was Russian cosmonaut Gherman Titov, who was 26 years old when he completed 17 orbits around Earth in the 1961 Vostok II mission, NASA says.

“Welcome to the dawn of a new space age,” Branson said on July 11, at a ceremony after the Virgin Galactic flight.

However, some have raised concerns that this so-called new age of privately operated space programs will primarily serve to fuel the rise of space tourism — a luxury that would be accessible only to the exceptionally wealthy. Daemen’s seat on New Shepard was originally awarded at auction to an unnamed bidder for $28 million; when the winner was unable to attend the launch due to a scheduling conflict, the auction’s runner-up, Dutch CEO Joes Daemen, paid an undisclosed amount for his son to visit space, Live Science reported July 15.

Meanwhile, Virgin Galactic has stated that it will offer tickets on upcoming commercial space flights at a cost of $250,000 per seat, according to Live Science sister site Space.com.

Prior to New Shepard’s launch, a petition suggesting that billionaires “should not exist” and if they go to space “they should stay there” gathered more than 160,000 signatures on the Change.org website.

“It is a stark reminder of just how enormous the inequality has become between corporate executives of some of the largest and most powerful corporations and ordinary workers,” Ellen Reese, a professor of sociology and chair of labor studies at the University of California Riverside, said in a statement.

“While Bezos is investing a fortune in a private space program, spending additional money on anti-union consultants, and benefiting from corporate tax loopholes, many of those who work hard every day inside Amazon warehouses and make deliveries are still not paid a living wage or enough to support a family,” Reese said.

Though, there may be a “silver lining” to the ultra-rich funneling astronomical amounts of cash into space travel: Perhaps the grandeur of the journey will lend them some much-needed perspective on the global challenges threatening Earth, said Flip Tanedo, a UCR assistant professor of particle physics.

“Astronauts often describe an ‘overview effect’ of seeing the Earth from outer space and appreciating its tiny fragility in the context of the universe,” Tanedo said in the statement. “If someone has the personal resources to send themselves into space, perhaps the experience will encourage them to lend some of those resources to the work of protecting our planet.”

Mindy Weisberger is a senior writer for Live Science covering general science topics, especially those relating to brains, bodies, and behaviors in humans and other animals — living and extinct. Mindy studied filmmaking at Columbia University; her videos about dinosaurs, biodiversity, human origins, evolution, and astrophysics appear in the American Museum of Natural History, on YouTube, and in museums and science centers worldwide. Follow Mindy on Twitter.