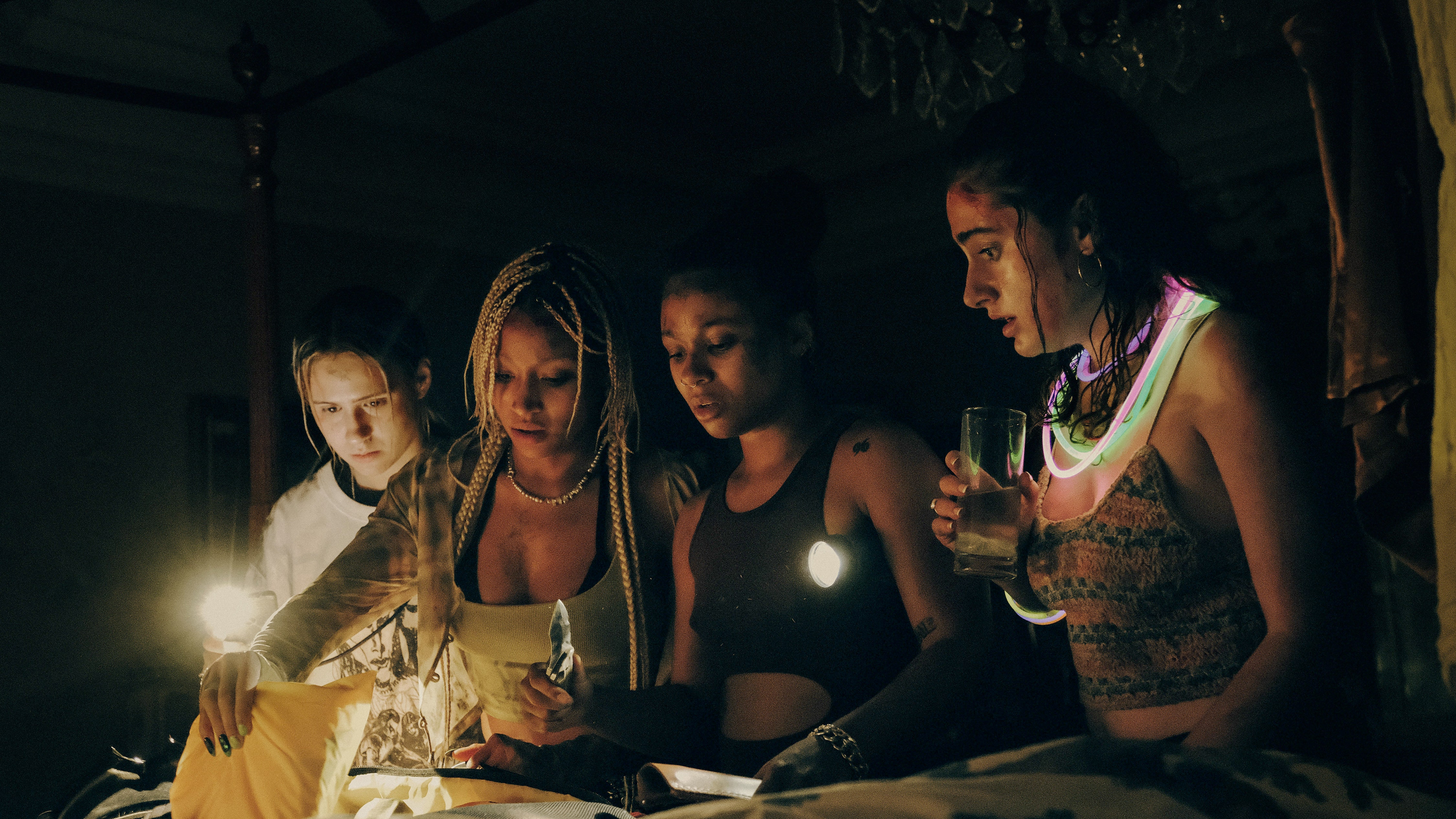 At first glance, Bodies Bodies Bodies, the latest film out of the buzzy hit factory A24, appears to follow the standard conventions of your classic horror film. During a massive hurricane, a once-tight-knit group of hyper-privileged besties and their partners retreat to their friend David’s (Pete Davidson) mansion to weather the storm. There, they play Bodies, Bodies, Bodies (a.k.a. Mafia), and one by one begin to drop like flies—winding up dead on patios, in basketball courts, and at the bottom of staircases. As the bodies pile up and old grievances are unleashed, one question remains until the very end—who’s the killer?

Of course, the answer is not as simple as it initially seems. (For those wary of spoilers, now would be a great time to stop reading.) In a nihilistic twist, final girl Bee (Maria Bakalova) and her girlfriend, Sophie (Amandla Stenberg), discover that there never was a killer: The series of unfortunate events began because David accidentally sliced his own neck while attempting to saber a bottle of Champagne in a stroke of competitive machismo after seeing older, alpha male Greg (Lee Pace) do so earlier that day. In Bodies Bodies Bodies, all the sound and fury, ultimately, was for nothing.

For director Halina Reijn, that’s the point. “The key into this film for me, coming from a radical theater, dark arthouse background, is the fact that there’s no killer,” she says into her computer camera, holding a glass of Champagne. “You know the Three Sisters of Chekhov, where they go, ‘We’re going to Moscow, we’re going to Moscow!’ And they never go, and it ends like, ‘Ah, much ado about nothing.’ That was exactly what I wanted to say with the film.”

An accomplished actor and director in her native Netherlands, Reijn makes her English-language directorial debut with Bodies, Bodies, Bodies. Despite knowing precisely how she wanted the film to end, Reijn still had her doubts about the final twist when the film premiered at South by Southwest in March. “I was literally dying, sick to my stomach like, ‘Is this going to work?,’” she says with an air of relief. “Now that it seems to work, I’m super grateful.”

In earlier drafts of the script written by Cat Person author Kristen Roupenian, there actually was a killer. But Reijn and screenwriter Sarah DeLappe quickly became attracted to the idea that the horrors that befell the group—both interpersonal and fatal—should instead be of their own making. “The core theme of the film is, ‘Is the killer outside of you, or is he inside of you? Are we beasts, or are we civilized?’” Reijn explains.

That the fragility of the male ego was ultimately responsible for inflicting immense amounts of pain and trauma onto a group of young women (and Greg) was fundamental to Reijn’s storytelling. “It’s a metaphor of an old world. It’s a metaphor of a time that, hopefully, we’re still fighting to get that behind us.” With David, she knew that she wanted to explore “white, straight male toxicity and vanity, and the pressure on these old-fashioned men to be strong,” and the ripple effect that can have within a community. “The character that Pete Davidson plays stands for all of those toxic values.”

Davidson was more than game to tap into his darker side to take on the toxically insecure David. “He knew exactly what I was talking about. He literally said he knows guys like that,” Reijn recalls. “He really enjoyed channeling it.” Reijn calls the Saturday Night Live alum a “genius of an improviser” who came up with one of the most instantly quotable lines in the film. “The lines where he goes, like, ‘I look like I fuck, that’s the vibe I want to put out there.’ He just comes up with that.”

Another standout improviser was Rachel Sennott, who plays Alice, Greg’s podcasting girlfriend. Reijn says Sennott gave the film “some golden moments,” including the iconic line “I have body dysmorphia.” “That was something she said to me at dinner, and then I asked her, ‘Can we use that?’ And she was like, ‘Yes, of course,’” Reijn recalls. “She also improvised some beautiful moments, just incredible.” Reijn’s directing style encouraged those spontaneous moments. “I don’t say cut,” she tells me. “I let them go on for a long time. It scared them in the beginning, because they were like, ‘What do you want me to do? The scene is over now.’ I would just not stop. You get these really authentic looks and closeups that you can use.”

Along with letting the camera linger, Reijn applies a theater vet’s collaborative spirit and discipline to her filmmaking. “Sarah DeLappe and me are really fascinated in working with Shakespeare, and Ibsen, and O’Neill, and just trying to steal and be inspired by them,” she says. She credits experimental Dutch theater maker Ivo van Hove as her biggest artistic influence. “I have no film school. I work on intuition,” Reijn says. “But my school was working with him and living in all these plays. I played Hedda Gabler for 10 years.”

43 Parenting Products Under $15 That Have Over 5,000 5-Star Reviews
What Happens When an Election Denier Wins Their Race? Kari Lake Executed the Playbook Perfectly