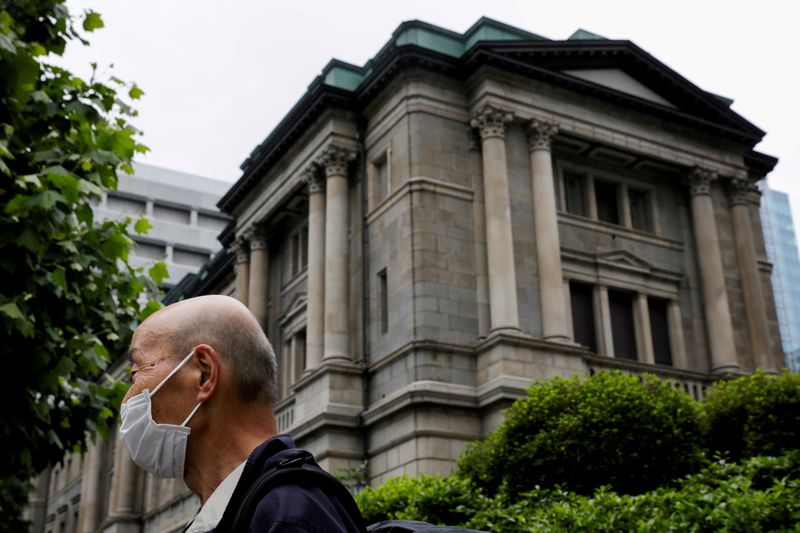 © Reuters. FILE PHOTO: A man stands in front of the headquarters of Bank of Japan in Tokyo, Japan, May 22, 2020. REUTERS/Kim Kyung-Hoon

TOKYO (Reuters) – The Bank of Japan is set to maintain its massive stimulus programme on Thursday and slash this year’s inflation forecast in a sign it has no intention to follow other central banks eyeing exits from crisis-mode policies.

While rising raw material prices have pushed Japan’s wholesale inflation to a 13-year high, consumer inflation is stuck around zero as weak domestic spending prevents firms from passing on higher costs to households.

Anaemic inflation and Japan’s still-fragile recovery will give the BOJ enough reason to maintain its target for short-term interest rates at -0.1% and that for 10-year bond yields around 0% at its two-day policy meeting ending on Thursday.

In fresh quarterly projections, the BOJ is seen cutting this year’s growth and inflation estimates, but sticking to its forecast of a moderate recovery, sources have told Reuters.

Markets are focusing on whether BOJ Governor Haruhiko Kuroda will issue any warning against the yen’s recent weakness, which gives exports a boost but drives up already high import costs for retailers still reeling from the pandemic’s pain.

The dollar has hovered around 113.50 yen after hitting a four-year high of 114.585 yen on Oct. 20, prompting the government to call for “stable” currency moves.

The dollar/yen is still below the 125 level seen by analysts as Kuroda’s line-in-the-sand. But the yen’s real, effective rate fell roughly 4.7% this year to 70.4 in September, BIS data showed, underscoring Japan’s diminishing purchasing power.

With exports and output taking a hit from parts shortages and supply constraints, policymakers are hoping the Sept. 30 lifting of state of emergency curbs will prod households to boost spending and help achieve a sustained economic recovery.

“My hope is that Japan will gradually see pent-up demand materialise around year-end or the beginning of next year,” BOJ board member Asahi Noguchi told a recent briefing.