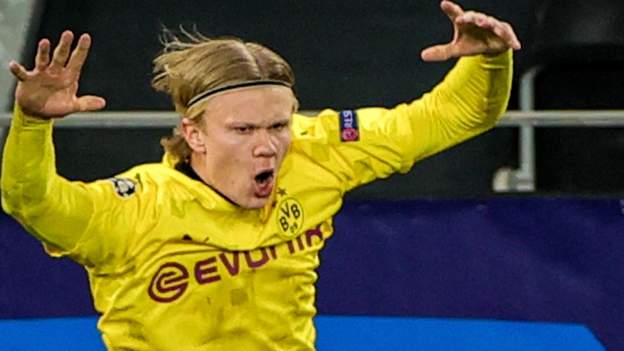 Erling Braut Haaland scored his 19th and 20th goals in 14 Champions League appearances as Borussia Dortmund drew 2-2 with Sevilla to progress to the quarter-finals 5-4 on aggregate.

The 20-year-old striker opened the scoring on 35 minutes with what was his only touch in the opposition’s box in the first half, Marco Reus’ pull-back finding the Norwegian for an easy tap-in past goalkeeper Yassine Bounou.

If Haaland’s 19th Champions League goal was simple, his 20th was a test of nerve in the face of drama.

Early in the second half, he bullied his way past the Sevilla defence to find the net from a tight angle only to have the goal ruled out for a foul. But the video assistant referee then awarded a penalty for an earlier shirt-pull by Jules Kounde.

The Norwegian took the spot-kick himself and saw both his first attempt and his follow-up saved by Bounou.

The spectacle did not end there, however, as VAR determined Bounou had moved too early off his line and the penalty was taken again, with Haaland finally slotting home to give Dortmund a 5-2 advantage in the tie.

Sevilla kept their hopes alive through a Youssef En-Nesyri penalty, before the same man’s powerful header deep in added time made the final moments nervy for the Bundesliga side.

Dortmund have reached the last eight of the Champions League for the first time since the 2016-17 season and will find out their opponents when the draw is made on 19 March.

Fresh from scoring two goals in the 4-2 defeat by Bayern Munich on Saturday, Haaland continued his phenomenal strike rate to further add to his remarkable record.

He has now scored twice in each of his past four Champions League appearances, becoming the first player to score two or more goals in four consecutive games in the competition.

No player has scored more goals than Haaland in the competition since he made his debut in September 2019. Bayern Munich’s Robert Lewandowski has 19 in that time.

With goal number 20 secured in tonight’s win over Sevilla, Haaland also takes the honour of being the player to score the most Champions League goals before turning 21.

Plus, it’s the quickest a player has ever reached 20 goals in the competition, and in 10 fewer appearances than the previous record holder, Tottenham striker Harry Kane.

And one last stat – the Dortmund forward now has 32 goals in 30 games this season.

Former Liverpool and Tottenham striker Peter Crouch on BT Sport: “Erling Haaland is like nothing I’ve ever seen. I just don’t know how you stop him, he is like a machine.

“He is world class already, a proper number nine – I thought we had lost them. He has everything: pace, power, aggression.

“That conversion rate – you can’t give him a sniff. His movement off the ball is brilliant. He just looks angry the way he plays football.

“We keep banging on about numbers but the numbers are scary. He is walking through players like they aren’t there. It is frightening.”

Former Bayern Munich and Manchester United midfielder Owen Hargreaves on BT Sport: “Everyone is going to have to get in line and get the cheque book out.

“He makes every team in the world better.

“This guy is a machine, a goalscoring machine; he makes it look so easy. He is ruthless – he barely misses the target.

“With Haaland up front, you don’t need many chances. He is a one-man wrecking crew.”