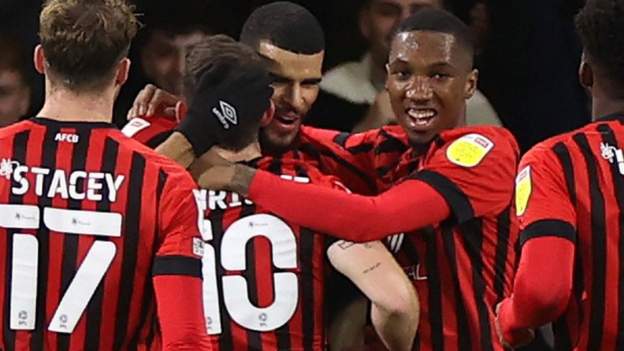 Bournemouth extended their lead at the top of the Championship to four points with a 3-0 win over 10-man Cardiff.

The Cherries went ahead fortuitously as Ryan Christie’s deflected effort found the net after 25 minutes.

Cardiff gave themselves a mountain to climb when Leandro Bacuna was sent off for a reckless two-footed challenge in first-half stoppage time.

Dominic Solanke added a second before Jefferson Lerma’s shot struck the bar and was deflected in by Alex Smithies.

The win lifts Bournemouth four points above Fulham, who have two games in hand, while Cardiff are 20th and just three points outside the Championship relegation zone.

The Welsh side were at least competitive in the first half before Bacuna’s dangerous foul made the contest relatively easy for the hosts after the interval.

Bournemouth boss Scott Parker made two changes to the side that beat Queens Park Rangers on Monday to send the Cherries top of the Championship, with captain Lloyd Kelly and Jaidon Anthony returning.

Cardiff, who were playing for the first time since a visit to St Andrew’s on 11 December because of Covid-19, made three changes to the side that drew with Birmingham City, with Will Vaulks, Bacuna and Mark Harris recalled.

The Bluebirds made an impressive start to the contest and should have taken the lead on five minutes when Bournemouth failed to deal with a long throw, but striker Kieffer Moore’s diving header was straight at goalkeeper Mark Travers.

The hosts, who were looking to complete a league double over Cardiff for the first time since the 1999-2000 season, threatened the Cardiff goal on 13 minutes, but Lewis Cook’s effort was blocked by Aden Flint.

There was an element of luck as Bournemouth opened the scoring on 25 minutes when Christie’s shot ricocheted off Mark McGuinness as he tried to block the ball and beat goalkeeper Smithies, who was deceived by the deflection.

Both sides missed decent opportunities before the interval with Anthony’s deflected shot saved by Smithies before the Bluebirds were denied again from close range as Travers blocked Moore’s effort when he slid to connect with Ryan Giles’ dangerous cross.

However, Cardiff’s task against the league leaders became seismic on the stroke of half-time as Bacuna’s two-footed lunge from behind on Philip Billing, which sparked a melee between the players, saw him rightly shown a straight red card.

Cardiff’s hopes of rescuing an unlikely point endured another blow on 58 minutes when Wales striker Moore had to be helped off the field after sustaining a foot injury.

Bournemouth should have doubled their lead when Lerma headed over from a corner with no challenge forthcoming, but they did not have to wait long for a second as Solanke exchanged passes with Billing and calmly beat Smithies to score his 18th league goal of the season.

The 24-year old missed a great chance to double his tally three minutes later, but he fired over from close range after Christie’s surging run with 15 minutes remaining.

Bournemouth added a third on 83 minutes when Lerma’s shot struck the crossbar and hit goalkeeper Smithies, who could do nothing to prevent the ball crossing the line.

Christie missed a good chance to add a fourth with a minute remaining, but he dragged his shot just wide.

“It was a satisfying night – a good result against tough opposition who were stubborn early on and we had to probe and work out where we could exploit certain moments.

“The goal probably comes at the right time for us, settles us a little bit and settles the crowd and from there the boy gets sent off and then I thought we were in real control.

“I thought it was a really professional performance, especially in the second half, in terms of controlling it because we’ve seen many times before that it’s not always easy against 10 men.

“This is a good result, two wins on the bounce but there’s still such a long way to go and this league brings up many challenges that we are going to face along the way. We’ve come out of a bit of a blip with two wins and that’s important but we have to keep moving.”

“First half they got the goal, they didn’t really hurt us too much, we were well in the game and Kieffer [Moore] has a couple of good chances he has to score.

“Then Leo [Bacuna] gets sent off and the second half became about trying to stay in the game and try and nick something and we did that for about twenty minutes and then they scored a really good goal.

“Obviously we are really unlucky with the third one hitting Alex on the back and going in.

“But we can’t dwell on it – we have to pick ourselves up because we’ve got another game in two days.”