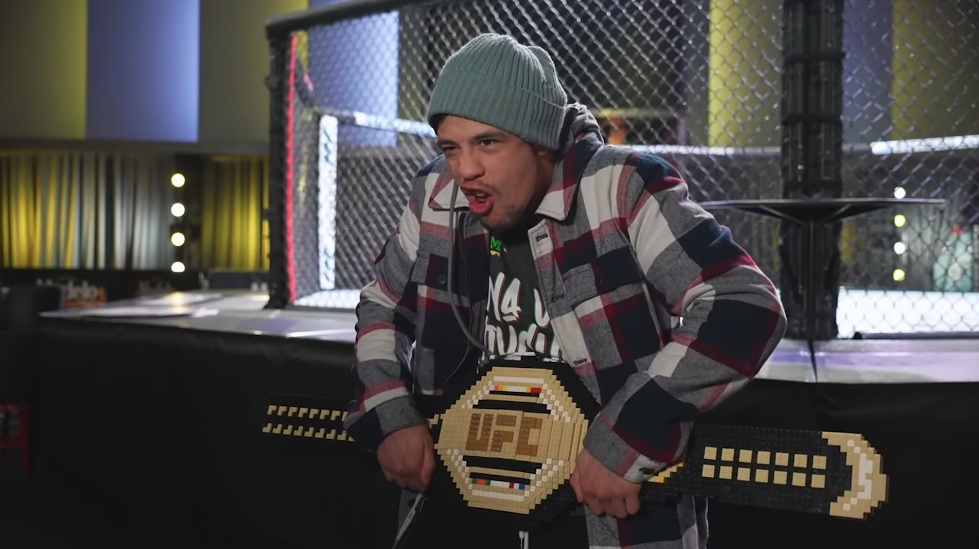 
Brandon Moreno’s 2022 is off to a magnificent start.

The UFC flyweight champion and avid Lego builder received a pleasant surprise earlier this week, as he was awarded a life-size Lego UFC belt made by artist Chris Ihle. Moreno (19-5-2 MMA, 7-2-2 UFC) was ecstatic to say the least, as he had previously told MMA Junkie months back he wanted a UFC belt made out of lego.

“It was cool because it was a surprise,” Moreno told MMA Junkie in Spanish.
“A local artist here in Las Vegas got in contact with the UFC and they set everything up. The UFC just took out a feature on how it was made and all that.

“The UFC told me, ‘Hey, you need to come to the UFC Apex this day at this time.’ And I was like, ‘Oh, ok.’ I get there and they were all weird because there were cameras and they hooked me up to a mic. So I was like, ‘Hmm, why do I need a mic? Ok.’

“They told me to head to the octagon and the artists were there, I didn’t know who they were at the time. They told me congrats, that they knew I was the first champion born and raised in Mexico and we know you’re a huge fan of Legos, so you deserve this. And Boom! They unveil it and show me the belt.”

Moreno had to take a few steps back to process what he had just seen. It was a dream come true.

“It’s very, very beautiful,” Moreno said. “The amount of detail it has it’s incredible. It’s super cool. I’m super focused on my fight right now, but once that passes I’m going to take my time and frame it and put it next to the real one. It’s heavy. I think in total it’s made with 2,000 pieces and they used a special glue for the Lego plastic. I think they also used a metal plate in the middle to make it more solid.”

Moreno (19-5-2 MMA, 7-2-2 UFC) made history by becoming the first Mexico-born UFC champion when he submitted Deiveson Figueiredo at UFC 263 in June. The pair will run things back for a third time when they square off in the UFC 270 co-main event on Jan. 22. It’s Moreno’s first UFC title defense.