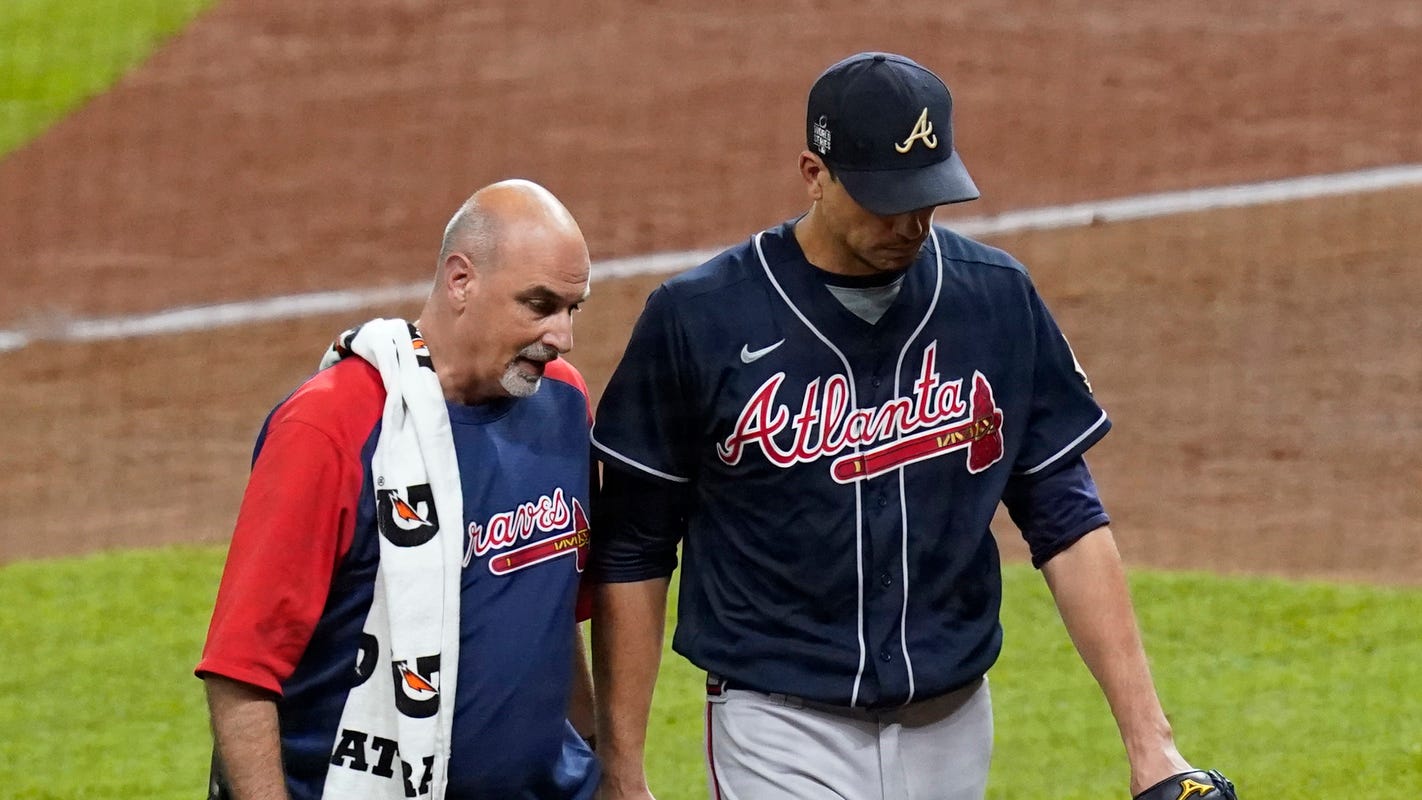 HOUSTON – It was a well-struck line drive, coming off Yuli Gurriel’s bat at 102 mph before striking Charlie Morton’s right leg. Only Morton knows how bad it hurt, but in just the second inning of Game 1 of the World Series, and with up to six more games remaining with the relentless Houston Astros, Morton was determined to shrug it off.

He retired two more batters, returned to the dugout with a slight limp and told catcher Travis d’Arnaud, “That one got me good.”

Yet he was not coming out of the game until his leg told him he was done.

Turns out that was just one more batter – a strikeout of Jose Altuve to begin the bottom of the third inning. The gorgeous curveball – vintage Morton, a tight 80-mph hammer – dropped into the zone and Morton dropped shortly thereafter, 16 pitches after Gurriel’s liner.

Sixteen pitches, as it turned out, after he broke his leg.

Morton, one of the greatest playoff pitchers of his era, suffered a right fibula fracture in the Braves’ 6-2, Game 1 win. He will miss the rest of this World Series.

Already lauded by current and former comrades as one of the greatest teammates ever, his final act of the 2021 season will only burnish his rep.

“To go out and strike out the next guy on a broken leg,” says d’Arnaud, “blows my mind.”

He exited with a 5-0 lead, and the Braves escaped with a 1-0 Series lead, but his absence will certainly complicate matters.

The club might have slotted Morton to start Game 4 in Atlanta on three days’ rest, as he did in closing out their National League Division Series against the Milwaukee Brewers, and surely would have started a Game 5.

Instead, the club will likely need to stage a bullpen game after Game 2 and 3 starters Max Fried and Ian Anderson pitch. That would leave Fried to come back on short rest in a Game 5.

But getting that far poses a challenge, too. The Braves’ bullpen performed gallantly in Game 1, recording 20 outs while giving up just two runs, wtih A.J. Minter’s 2 ⅔-inning performance setting the tone.

They’ll need to come back and perform again in Game 2, though their thoughts were with their fallen starter.

Snitker said X-rays performed after the second inning were inconclusive. Morton said he could pitch, though fielding could be a challenge, so Snitker urged corner infielders Freddie Freeman and Austin Riley to be prepared for more coverage.

Minter and a right-hander quickly got loose in the Braves bullpen, the only clue to the Astros that something was amiss with Morton.

“It’s incredible that he even like thought of going out there,” says d’Arnaud, “and I bet you it was so A.J. could have some more time to get ready

So it’s not goodbye, though that didn’t make the loss of their leader any easier, try as Morton did to downplay it when teammates visited him between innings.

“You could tell he was devastated,” says Minter, “but he wasn’t going to show it.”

Says d’Arnaud: “I just want to give him a hug.”