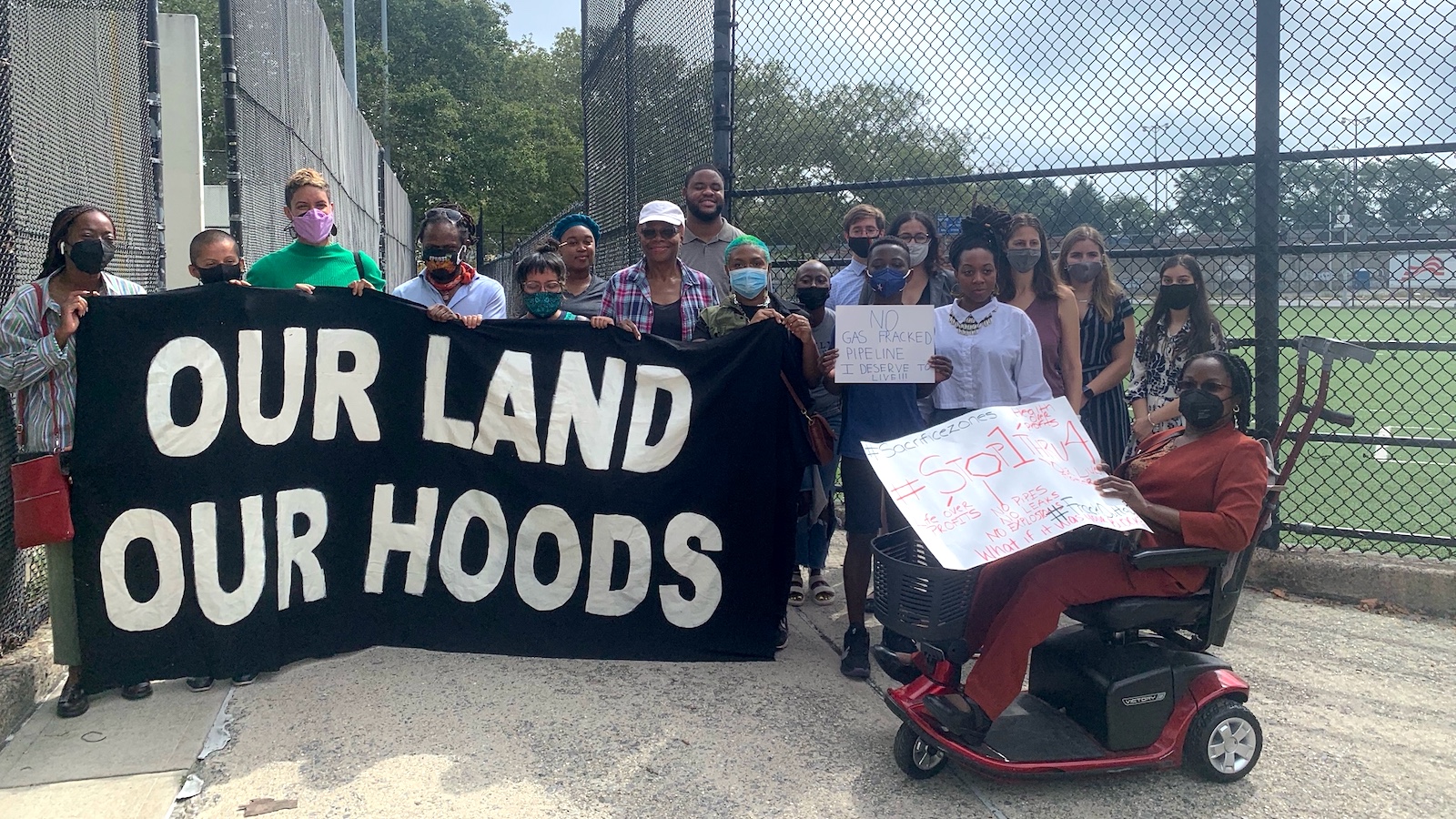 Environmental justice advocates have spent more than a year staging demonstrations against a natural gas pipeline being built in Brooklyn, New York. They’ve biked the route of the pipeline, chained themselves to a construction site, and organized a gas bill strike. Now, their opposition has a new legal angle.

Residents of Brooklyn and their attorneys filed a legal complaint late last month, arguing that National Grid’s nearly-finished Metropolitan Reliability Infrastructure Project, or MRI — known to locals as the “North Brooklyn Pipeline” — violates the Civil Rights Act by placing disproportionate harms and risks onto communities of color. The complaint was submitted to federal agencies including the Environmental Protection Agency, or EPA, and the Department of Justice, and a press release named New York’s Department of Environmental Conservation and Department of Public Service as “complicit” in National Grid’s racial discrimination.

Four-fifths of the originally planned pipeline have already been completed and are in service, and National Grid recently agreed to drop its plan to build a fifth section, at least for now. But community organizers are requesting that the Biden administration revoke National Grid’s operating license and stanch the flow of gas.

“It’s disrespectful that this continues to happen in Black and brown communities,” said Fabian Rogers, a member of a community group called Brownsville Green Justice, during a rally to unveil the complaint. “Turn the gas off immediately.”

According to the complaint, National Grid failed to notify or educate the public about the pipeline and its potential impacts to communities of color, including health risks from leaking methane and contamination of the soil and groundwater. The danger of an explosion is particularly concerning, the complaint said, pointing to National Grid’s history of leaks and safety violations, plus the fact that nearly 160,000 New Yorkers — 70 percent of whom are nonwhite — live within the pipeline’s blast zone.

The project is routed through the predominantly Black and Latino neighborhoods of Brownsville, Ocean Hill, Bushwick, and East Williamsburg. Residents of these areas — which are already overburdened with disproportionate environmental injustices like elevated exposure to particulate air pollution and vulnerability to high temperatures — have said that they only learned about the pipeline after it was built, with natural gas already flowing beneath their homes.

National Grid rejected the complaint’s allegations, telling Grist that the MRI project was subject to numerous public hearings and notifications, and that it was designed to meet “critical energy needs for our 1.9 million customers downstate safely and reliably.”

Attorneys filing the complaint have also alleged that state agencies “doubled down on discrimination” by failing to enforce health and safety regulations in the Brooklyn neighborhoods. According to Anjana Malhotra, a senior attorney at the National Center for Law and Economic Justice, which helped file the complaint on behalf of Brooklyn community groups, New York state’s Department of Environmental Conservation and Department of Public Service greenlit National Grid’s activity despite the utility’s failure to test the MRI for leaks and other problems, as well as its failure to submit required mapping information to the federal Pipeline and Hazardous Materials Safety Administration.

“They did not enforce the law equally in white and Black and brown communities,” Malhotra claimed, saying that the agencies went to greater lengths to evaluate the safety and environmental impacts of a liquefied natural gas facility that National Grid is expanding in Greenpoint, a majority-white neighborhood in northern Brooklyn.

The complaint joins similar efforts from polluted communities of color around the country to make federal agencies enforce a nondiscrimination provision of the Civil Rights Act known as Title VI, which says that entities receiving federal funding — such as National Grid — are barred from engaging in race-based discrimination. They are largely targeted at the EPA in the hopes that the agency will compel state regulators to revoke oil and gas companies’ infrastructure permits.

In the past, such efforts have been largely unsuccessful. Only 10 percent of civil rights complaints filed with the EPA ever lead to an investigation, and the agency has only found noncompliance with Title VI in a small handful of cases. But legal experts now say there are signs of change, thanks in part to efforts from EPA Administrator Michael Regan to set environmental justice as a priority for the agency.

“Historically, the EPA has been terrible at enforcing obligations under the civil rights laws,” said Wyatt Sassman, an environmental law professor at the University of Denver. “Only recently have we seen the agency start to take these complaints seriously, and that’s important.”

One successful case came this March, following a complaint filed in November 2020 by the Great Rivers Environmental Law Center against the Missouri Department of Natural Resources. The Missouri department, Great Rivers’ attorneys argued, had “blatantly” violated Title VI in two ways: by extending a pipeline permit that would disproportionately expose communities of color to air pollution, and by failing to equitably involve the community in its decision-making process. The EPA hasn’t yet finished its investigation, but a preliminary ruling in March 2020 validated the latter allegation, finding, for example, that the Department of Natural Resources had failed to make its public comments process accessible to people who aren’t proficient in English.

Another case arose in May, when the Southern Environmental Law Center submitted a complaint to the EPA on behalf of a Tennessee group opposing the Byhalia Pipeline. By allowing the crude oil pipeline to be routed through southwest Memphis’ majority-Black communities, the complaint argued, Tennessee’s environmental agency had violated Title VI’s nondiscrimination requirements.

When asked if similar complaints were likely to be filed with the EPA, Sassman said “unequivocally yes,” although he said the jury was still out on the tactic’s fruitfulness. “These Title VI complaints allow communities to articulate and bring awareness to environmental justice issues and to hold agencies accountable,” he said, but on their own, “they’re not sufficient to address our legacy of racism and how it manifests in these communities.” He advocated for greater empowerment of under-resourced communities in policy and decision-making so that complaints and other legal remedies aren’t needed.

In Brooklyn, Malhotra expressed optimism that the EPA would take the complaint seriously. In an ideal scenario, she said, the agency would collaborate with the Department of Transportation, the Department of Justice, and the Department of Energy to investigate New York state regulators and National Grid — ultimately shutting off the flow of gas throughout all sections of the pipeline.