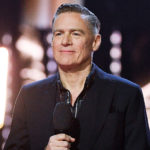 Keith Urban took Adams’ place in the performance segment, which also included Mickey Guyton singing “What’s Love Got to Do With It” and Christina Aguilera, in a Turner T-shirt, delivering “Nutbush City Limits.” Angela Bassett, who won an Academy Award for portraying Turner in the 1993 biopic What’s Love Got to Do With It, inducted Turner, who accepted via a short video from her current residence in Sweden.

It was Turner’s second induction into the Rock Hall. She also entered in 1991 with ex-husband Ike Turner.

The Rock Hall inductions were filmed by HBO and will be aired starting Nov. 20.