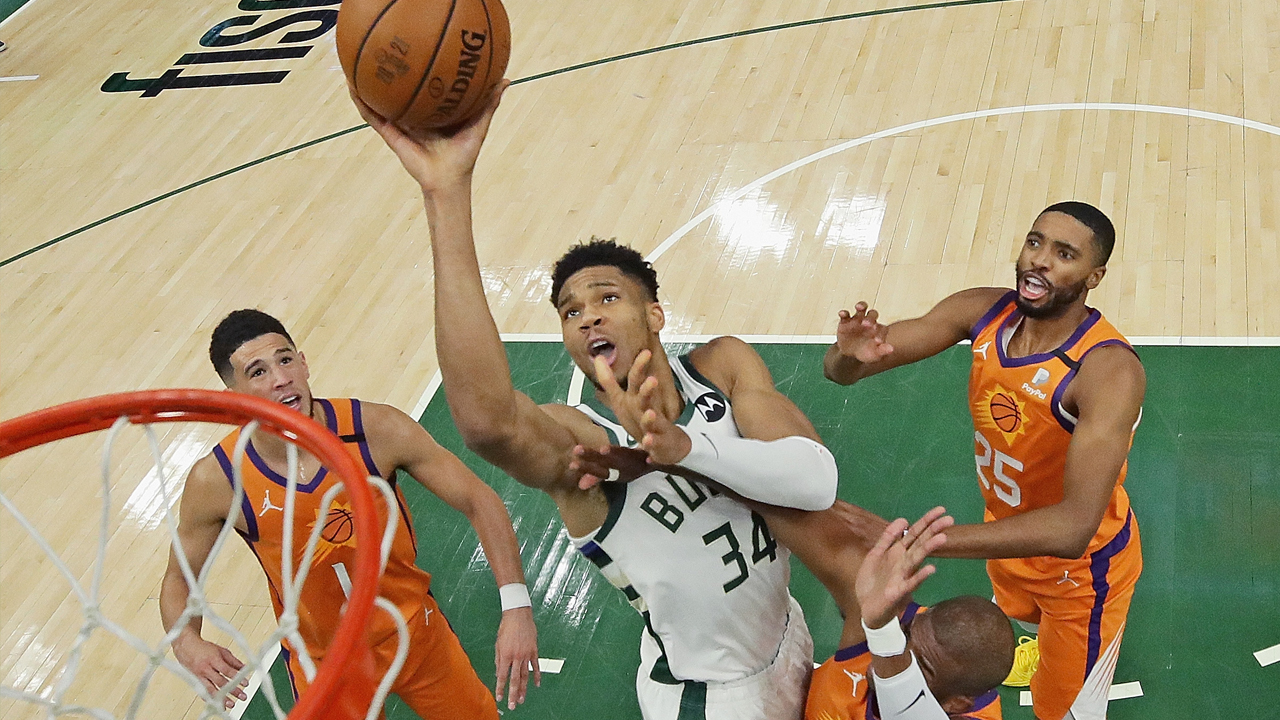 Devin Booker’s 40+ points, Giannis’s clutch block and a game tightly fought until the bitter end, Wednesday’s instalment of the Bucks vs Suns series was one to behold. And, now that Milwaukee have drawn level with two apiece and are carrying momentum, it really could be anyone’s. Game 5 will be decisive for both teams’ prospects, so read on as we explain how to get a Bucks vs Suns live stream and watch the NBA Playoff Final series online from anywhere.

After 123 playoff games, the wait for an NBA Finals appearance came to an end for Chris Paul, but he’s not the only player competing for the Larry O’Brien Championship Trophy for the first time – far from it.

Only the Suns’ Jae Crowder has been here before, which makes this the greenest NBA Finals series in nearly half a century.

CP3’s biggest rival for the Trophy is Bucks star Giannis Antetokounmpo, and after suffering a nasty hyperextended knee in the Eastern Finals, he’s back on form, scoring (and blocking) buckets at an alarming rate – and any question marks over his fitness will likely be quashed now.

No matter what happens, though, this clash of titans should make sparks fly on the court as both Phoenix and Milwaukee ramp up to give it their all – so read on for how to watch the Bucks vs Suns game 5 online and get an NBA Playoff Final live stream from anywhere.

Stream NBA Final without cable with Sling TV
Get your first month for only $10 now. With each game of the NBA Playoff Final being shown on both ABC and ESPN3, cord cutters can watch with a Sling TV subscription. Sign up to Sling Orange now and shave a mighty $25 off the usual monthly price, while also scoring access to AMC, CNN and 20+ more channels.
View Deal

How to watch NBA Final from outside your country

Scroll down for all the ways you can watch the Bucks vs Suns series online in a number of countries around the world. But first, you should know that if you’re abroad right now, you probably won’t be able to watch the NBA Playoff Final like you normally would at home.

This is because of geo-blocking, a digital restriction that means certain streaming services are only accessible in the region they’re based in.

The simplest and most reliable solution is to use a VPN service to change your IP address to a different location. This will generally let you tune in to your local coverage, just as you would from home, and means you don’t have to trawl the sketchier corners of the internet for an illegal stream.

Use a VPN to watch NBA Playoff Final online from anywhere

ExpressVPN – get the world’s best VPN
We’ve put all the major VPNs through their paces and we rate ExpressVPN as our top pick, thanks to its speed, ease of use and strong security features. It’s also compatible with just about any streaming device out there, including Amazon Fire TV Stick, Apple TV, Xbox and PlayStation, as well as Android and Apple mobiles.

Sign up for an annual plan now and get an extra 3 months absolutely FREE. And if you change your mind within the first 30 days, let them know and they’ll give you your money back without a quibble.

Suns vs Bucks live stream 2021: how to watch the NBA Final online

Coverage of the Bucks vs Suns game 5 is available on both ABC and ESPN3, which are showing the entire NBA Playoff Final series.

If you have them as part of your cable package, you can also live stream the Bucks vs Suns directly through the ESPN website and the ABC website.

How to watch NBA Playoff Final without cable

Cord-cutters are in luck too, because you can watch every game of the Bucks vs Suns series without having an expensive cable package.

Great-value OTT streaming service Sling TV is the option we recommend. Its Orange package costs just $35 a month and gets you all the games in the NBA Playoff Final series via ESPN3, which is a part of this plan.

Better still, Sling is offering new subscribers a fantastic bargain – right now you can get a whole month of Sling Orange for $10. The package also includes TNT, Nick Jr. and plenty more, and unlike cable, you can cancel your subscription at any time.

Another brilliant option is fuboTV, which is an even more fully-featured streaming service that offers ESPN, ABC and more than 120 other channels. Packages start from $64.99 a month and there’s even a FREE fuboTV trial you can try to see if it’s right for you.

Out of the US and want to watch your home coverage? No worries – just use a VPN as described above.

How to watch Suns vs Bucks: live stream NBA Playoff Final in Canada

Canadian basketball fans will be able to watch the entire Bucks vs Suns series on TSN and Sportsnet, which are splitting NBA Playoff Final coverage in the Great White North.

If you get TSN as part of your cable deal, then you’ll just be able to log in with the details of your provider and get access to an NBA Playoff Final live stream.

Similarly, you can watch Sportsnet online at no extra charge if you already subscribe to the channel as part of your TV package – or access it on a streaming-only basis, with plans starting from just CA$9.99 a month.

If you decide to subscribe or already have, remember you can take your favorite sports streaming service with you wherever you go – just try our No. 1 overall rated VPN 100% risk-free for 30-days and follow the instructions above.

How to watch Milwaukee Bucks vs Phoenix Suns: live stream NBA Final basketball in the UK

Basketball fans based in the UK can tune into the NBA Playoff Final on Sky Sports, with Sky Sports Main Event showing the Bucks vs Suns game 5 at 2am BST in the early hours of Sunday morning.

Subscribers also get to watch on the move using the Sky Go app, which is available on nearly all modern phones, tablets, laptops, PCs and consoles.

For those without Sky, the best option is a Now Sky Sports membership, which includes all 11 channels.

The NBA League Pass, which is available for £24.99 and covers the entirety of the playoffs, is a great option for die-hard fans who want to watch as much of the postseason action as possible.

To access your usual streaming service from outside the UK, you’ll need to download a good VPN as detailed above.

Suns vs Bucks live stream 2021: how to watch NBA Final online in Australia

In Australia, the Suns vs Bucks game 5 starts at 11am AEST on Sunday morning, and you can tune into the NBA Final on ESPN, which is available through Foxtel.

That means you can also live stream the basketball through slick streaming platform Kayo.

Newbies can take advantage of a FREE 2-week Kayo trial to see if the service is right for them. For those who decide to keep it, Kayo price plans start from a super affordable AUD$25 a month – really good value considering how much premium live sports action it hosts.

In addition to being where to watch NBA basketball online in Australia this year, it’s also your home for the F1, AFL, NRL, Super Rugby AOT, cricket and way more. Handy if you don’t want to go all out on Fox.

Die-hard fans will also know that you can also watch the NBA Playoff Final on the NBA League Pass, which costs $39.99 per month after a 7-day FREE trial.

Not in Australia? Aussies abroad looking to watch an NBA Playoff Final live stream should find that a good VPN helps them access their home streaming services wherever they are.

Here’s how this NBA Playoff Final series between Phoenix and Milwaukee looks:

Mo Harber-Lamond is eCommerce Editor at Tom’s Guide, and contributor for TechRadar. He focuses on cyber security content for Tom’s Guide, and creates insightful content across the board to help readers make informed buying choices.