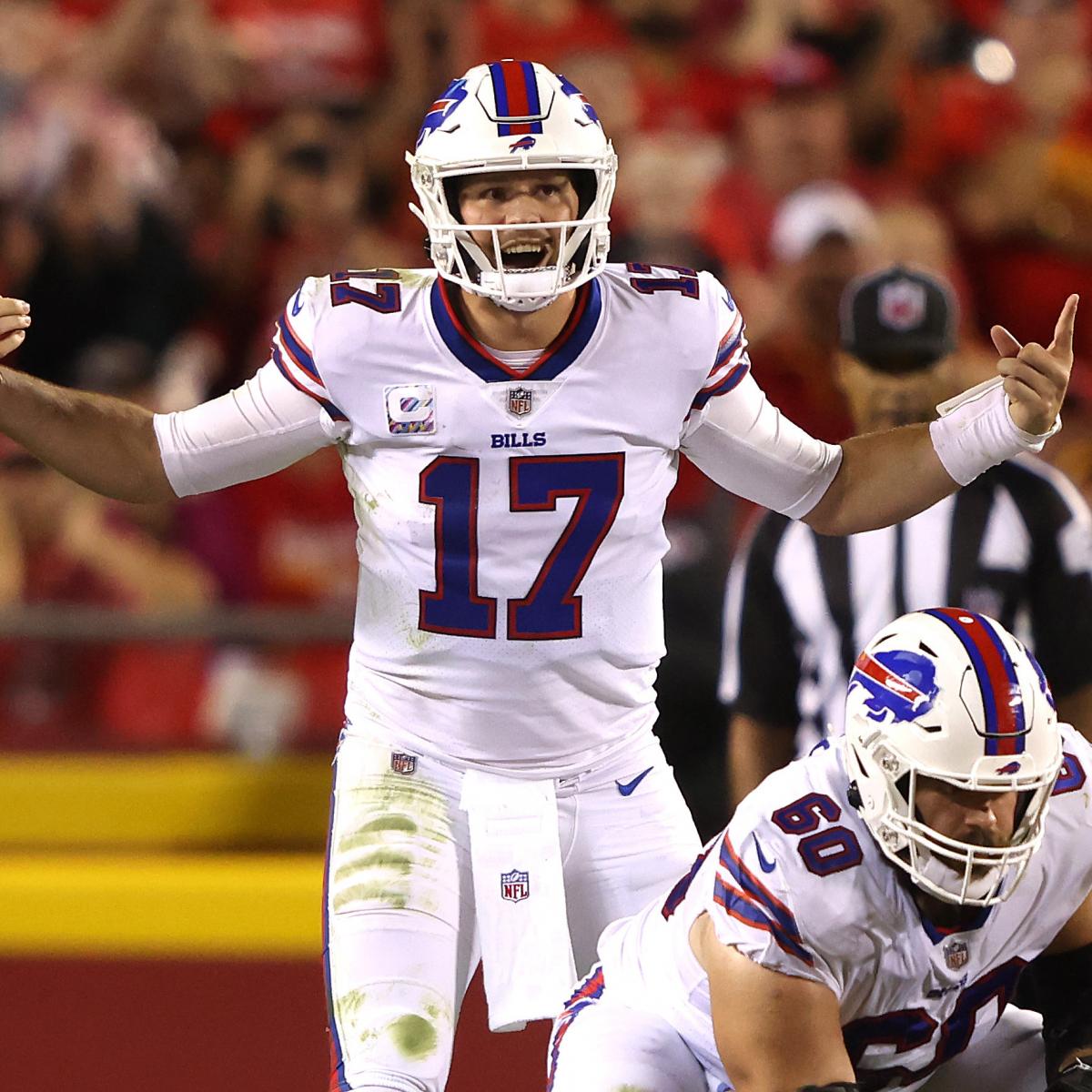 If the Buffalo Bills aren’t the AFC’s best squad, they’re right in the mix to take the spot now vacated by the Kansas City Chiefs.

The Chiefs made appearances in the last two Super Bowls. Patrick Mahomes is as good as anyone in professional football. However, the Bills dismantled Kansas City and the Chiefs’ vaunted offense during Sunday Night Football at Arrowhead Stadium. The 38-20 score doesn’t entirely reflect the one-sided nature of the contest.

As the reigning AFC champions become more exposed with each passing week—primarily to an awful defense and opponents starting to defend Mahomes and Co. a little differently in an attempt to slow the group down—the Bills are building steam and working their way to the top of the hill with only a few equals.

From Buffalo’s perspective, the Bills’ recent run throughout the last four weeks has been impressive, even if the overall competition hasn’t. Including Sunday’s outcome, Sean McDermott’s squad beat its last four opponents by a combined score of 156-41.

Granted, the performance against the Chiefs is the first to truly show how good Buffalo can be. A team can only beat those opponents placed in front of it. At the same time, a franchise handling its business when it’s expected to win shows a different level of maturity within the locker room. The Bills don’t play down to their competition.

Sure, the Miami Dolphins, Washington Football Team and Houston Texans aren’t good. In fact, the trio is terrible with a combined 4-11 record. Each of those squads played most of those meetings with their backup quarterback, too. So, the Bills received a healthy dose of skepticism when facing the Chiefs.

The same consistencies seen over the last few weeks showed up against a big boss. The Bills are dynamic on offense with Josh Allen leading the way, and the defense is deep with a penchant for creating turnovers.

As amazing as Mahomes, Kyler Murray, Lamar Jackson and Russell Wilson are, Allen is the game’s most physically gifted signal-caller. At 6’5″ and 237 pounds with a howitzer strapped to his right shoulder, the Bills quarterback is simultaneously a highly dangerous passer and the Bills’ best rushing threat. Early in the contest, offensive coordinator Brian Daboll implemented some old-school, single-wing concepts to get the ball rolling.

.@JoshAllenQB uses his legs to put the @BuffaloBills on the board! #BillsMafia

The caliber of athlete running the play may be as different as Model T compared to a new Tesla, but the basic concept dates back to when Jim Thorpe played.

Implementation of multiple looks stresses defenses to their breaking point. They can’t possibly handle Allen, the passer, while also accounting for designed runs or the quarterback’s scrambling ability.

Much like Mahomes, Allen is the great equalizer. When things break down around him—and they often do, as Buffalo shifted its offensive line around a little in recent weeks—the quarterback can still make a play and offset protection issues. Not always, but they do so better than most, if not all.

In Allen’s case, his rare blend of size, strength, athleticism and prodigious arm strength makes him different than anyone else in the game. Cam Newton in his prime was the closest we’ve seen to Allen. Even Superman didn’t quite reach the levels the Bills quarterback has over his last 20 regular-season contests. Allen changes the equation simply because he’s behind center.

“He’s a special QB,” veteran wide receiver Emmanuel Sanders told reporters after the game, “and I’ve played with a lot of great ones.”

The receiver sure has. Sanders played alongside three current or future Hall of Fame inductees in Ben Roethlisberger, Peyton Manning and Drew Brees.

The Bills aren’t exactly short on skill-position talent, either. Zach Moss got 14 touches for 92 yards against the Chiefs. Stefon Diggs, Cole Beasley, and tight end Dawson Knox are legitimate weapons. Sanders, who signed as a free agent this offseason, fits in rather well already. Buffalo leads the league with an average of 34.4 points per contest.

But the offense was a given. Allen and his group did these things last year. Furthermore, the Bills built halftime leads in a record 14 straight contests.

Could the defense hold up its end of the bargain? It did. Mahomes left the game questioning himself after his three-turnover performance.

“I have to re-evaluate where I’m at, what decisions I’m making,” the Chiefs quarterback said. “… I have to cut it out.”

As ESPN’s Matt Bowen noted, Buffalo didn’t do anything exotic. Basically, the team sat back and primarily played a Cover 2 shell with a couple of other looks sprinkled into the mix to force the Chiefs into being patient. Buffalo didn’t want to surrender the big explosive plays and didn’t. Kansas City may have accumulated 392 total yards, but its offense never really looked in sync.

Now at 2-3, the Chiefs have a lot of work to do. In two weeks, Kansas City’s meeting with the Tennessee Titans could already be construed as a must-win situation. No, Andy Reid won’t overlook Washington next week, but the Chiefs really reassert themselves into the thick of things against the AFC’s best. Tennessee may only be 3-2, but the Titans currently lead the AFC South.

Meanwhile, the Bills can stake their claim for AFC supremacy. The Los Angeles Chargers and Baltimore Ravens, who also beat the Chiefs earlier this year, are in the same conversation.

If one were to split hairs which of these three teams deserves the nod through five weeks of play—assuming the Ravens win Monday against the Indianapolis Colts—the Chargers probably have a slight advantage based on strength of schedule. Brandon Staley’s group also beat the Chiefs while taking out the Las Vegas Raiders and Cleveland Browns in back-to-back weeks. Plus, Chargers quarterback Justin Herbert is playing at an MVP level as well.

Buffalo hurdled its first major obstacle. McDermott’s squad could easily capture seven straight victories against Tennessee, the Miami Dolphins (after its bye), Jacksonville Jaguars, New York Jets, Colts, New Orleans Saints and New England Patriots. The reigning Super Bowl champions, the Tampa Bay Buccaneers, will be waiting on the other side of this stretch as a litmus test to show whether the Bills are more than an AFC playoff team.

Based on what Buffalo showed already and what lies ahead, the Bills will almost certainly emerge as the AFC’s best team. They must prove themselves before being anointed, though.

“[Sunday] was a big step, but there’s a lot of ball left,” Sanders said.