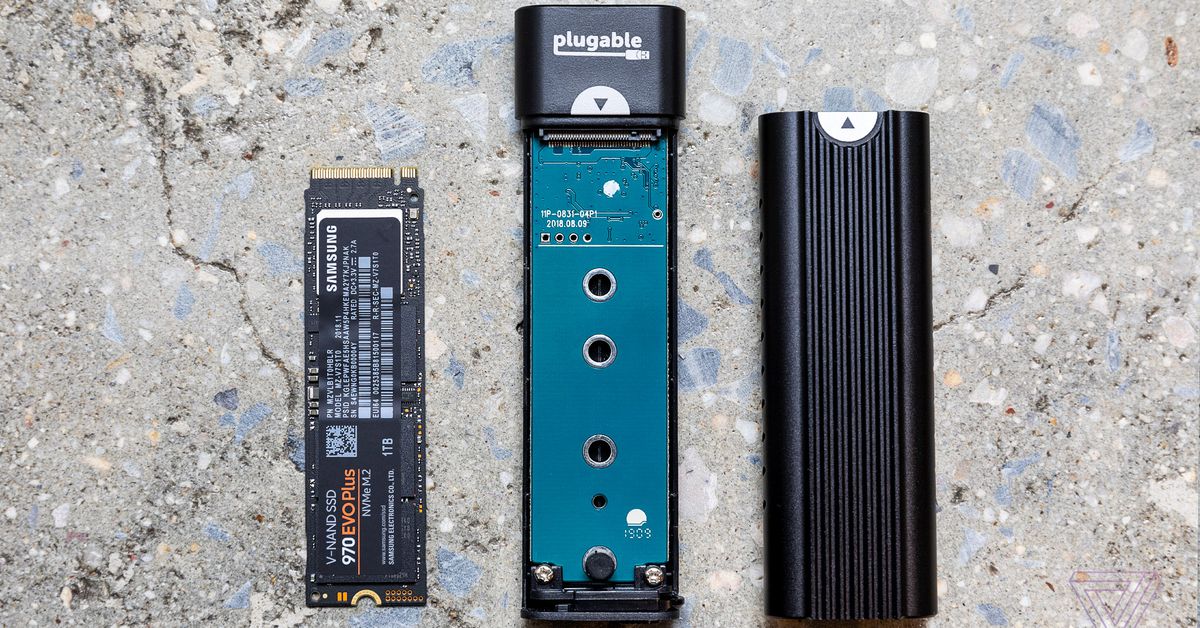 In most cases, people purchase M.2 NVMe drives to stick into their desktop PCs or laptops for more of that good, fast storage. But there are some other, more practical applications that don’t require opening up your hardware. You can get one of these fast SSDs, then stick it into a small enclosure, and suddenly you’ve made yourself a convenient and speedy portable USB-C drive that’ll cost you as little as $93 with today’s deals.

If that sounds like something you’d like to add to your tech repertoire, Sabrent’s tool-free USB-C Gen 3.2 enclosure is down to just $22.94 (usually $40) at Amazon. Adding an M.2 drive to it is simple, just pop the top off and follow the instructions for carefully guiding the drive into the slot. Then, you fasten it into place to keep it from moving.

(Note: the M.2 SSD enclosure featured in the lead image above is available here at Amazon for $40, down from its normal $50 price.)

You can stick a SATA or NVMe (the latter being much faster) SSD in this enclosure, and it supports up to the 2280 form factor, which is the most popular size (it can house 2242- and 2260-sized M.2 drives, alternatively). Its USB 3.2 support allows for up to 10Gbps transfer speeds, though its speed will ultimately be determined by what kind of drive you stick inside of it. An affordable and relatively speedy option to put inside of this enclosure also comes from Sabrent. Its 1TB Rocket Q SSD costs $89.99 right now (usually $111) at Amazon.

If you are hoping to get a Samsung SSD within this price range, its 1TB 980 NVMe SSD is $109.99 — down from $139.99 — at Best Buy. This model should be sufficient for a lot of people’s needs, though it’s not the fastest NVMe drive out there, as it lacks DRAM, which is relied upon by your PC to map the contents within the drive to make it faster at serving up your data.

For a slightly speedier Samsung SSD that does feature DRAM, check out its 970 Evo Plus with 500GB of storage that costs $69.99 at Best Buy, down from its usual price of $95.

For something completely different, check out Amazon’s stellar sale price on the latest (third-gen) AirPods. They’re back down to $139.99 (originally $179), matching the great price that was popular with readers during Black Friday and Cyber Monday. For those not in the know, these retain a similar design to the AirPods Pro but have some key differences. Notably, they don’t have silicon ear tips for a better fit, nor do they support active noise cancellation. Though, while similar to the original AirPods in terms of how they fit in the ear canal, our review Chris Welch says that Apple amped up the sound quality in this generation, among other new additions. Read our review.

Similar in appearance to their sleeker sibling, the AirPods Pro, the latest entry-level AirPods boast a new charging case and shorter stems. They’re also water-resistant, unlike the 2019 model, and sport better battery life.

If you’re looking for an affordable way to add some ambient lighting around your TV that changes color in response to what’s happening on the display, check out this deal at Amazon. Govee’s Immersion backlights that support TVs between 55 and 65 inches are $63.09 when you check the coupon box on this page. Originally, this product costs $83.99.

The Immersion kit includes a long LED light strip that goes behind your TV, along with a camera that needs to be mounted atop your TV (this is how its lights can match what is showing on your TV). The lights can be controlled through Govee’s app or via your voice with Amazon Alexa or Google Assistant. Read our review.

Other deals to set you right this Friday