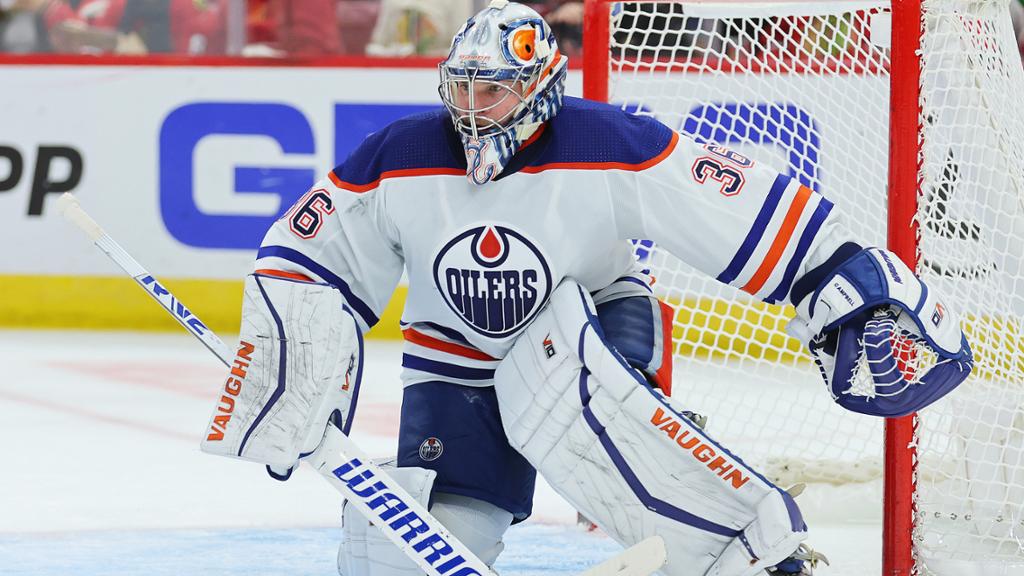 NEW YORK — Jack Campbell said he is available to play for the Edmonton Oilers despite sustaining a broken nose Monday.

Campbell was on the bench as Stuart Skinner‘s backup during a 5-2 loss at the New Jersey Devils when he was hit in the face by a puck in the second period.

“They always take the goalie’s chair at the 30-second mark (before the end of the period) so the boys can walk, and the coaches can walk (to the dressing room),” Campbell told NHL.com. “So I was standing up, kind of leaning in. We tried to get it in deep, it was a pretty hard wrister and [a Devils defenseman], nice hand/eye coordination, he batted it right out of the air and right off my nose.”

Campbell had a cut on the bridge of his nose glued shut and his nose adjusted into place by a doctor, which made him unavailable for the game. But he practiced Tuesday and said he would be ready if needed Wednesday for Edmonton’s game at the New York Islanders (7:30 p.m. ET; SN360, MSGSN, ESPN+, SN NOW).

If Campbell does play, it would be his first game since Nov. 10, when he allowed seven goals on 32 shots in a 7-2 loss to the Carolina Hurricanes. He’s backed up Skinner the past four games.

Campbell said he’s made some technical adjustments during his practice days working with goaltending coach Dustin Schwartz but said the most important thing for him is to get back to enjoy playing.

“It’s just relaxing and having fun,” he said. “That’s really when I’m playing my best. I put a lot of pressure on myself, and up to this point I definitely feel I have more. So just getting back to having fun and stopping pucks.”

Campbell’s teammates also feel they can do more to support him.

“I think he would be the first guy to agree that he can be better,” forward Leon Draisaitl said. “But we have to give him a game where he can find his game a little and not get 42 shots against. We’ve got to find a way to help him out more.”

The Oilers have allowed 34.4 shots per game, the fifth-most in the NHL.

Campbell said a big help in his game is the competition he faces in practice each day, including the two top scorers in the NHL, forwards Connor McDavid, with 35 points (16 goals, 19 assists), and Draisaitl, with 31 points (11 goals, 20 assists). He also mentioned Zach Hyman.

“Having Zack, Connor and Leon here, we have a lot of great forwards here,” he said. “Every day you’re getting elite offensive guys on you, so that definitely forces me to be at my best in practice and it’s going to translate to a game. … I definitely find it prepares you well.”

Woodcroft said he’s seen the right kind of work from Campbell during what the coach called a chance for a physical and mental reset.

“I think confidence is earned, and it usually starts right here on the practice rink,” Woodcroft said. “Having a breather and having Stuart play at the level that he has has allowed for us to give him a little bit of a breather. It’s a little bit of a reset for him.

“He’s a popular teammate, works his tail off and we have full confidence that he’ll be good in his next start.”