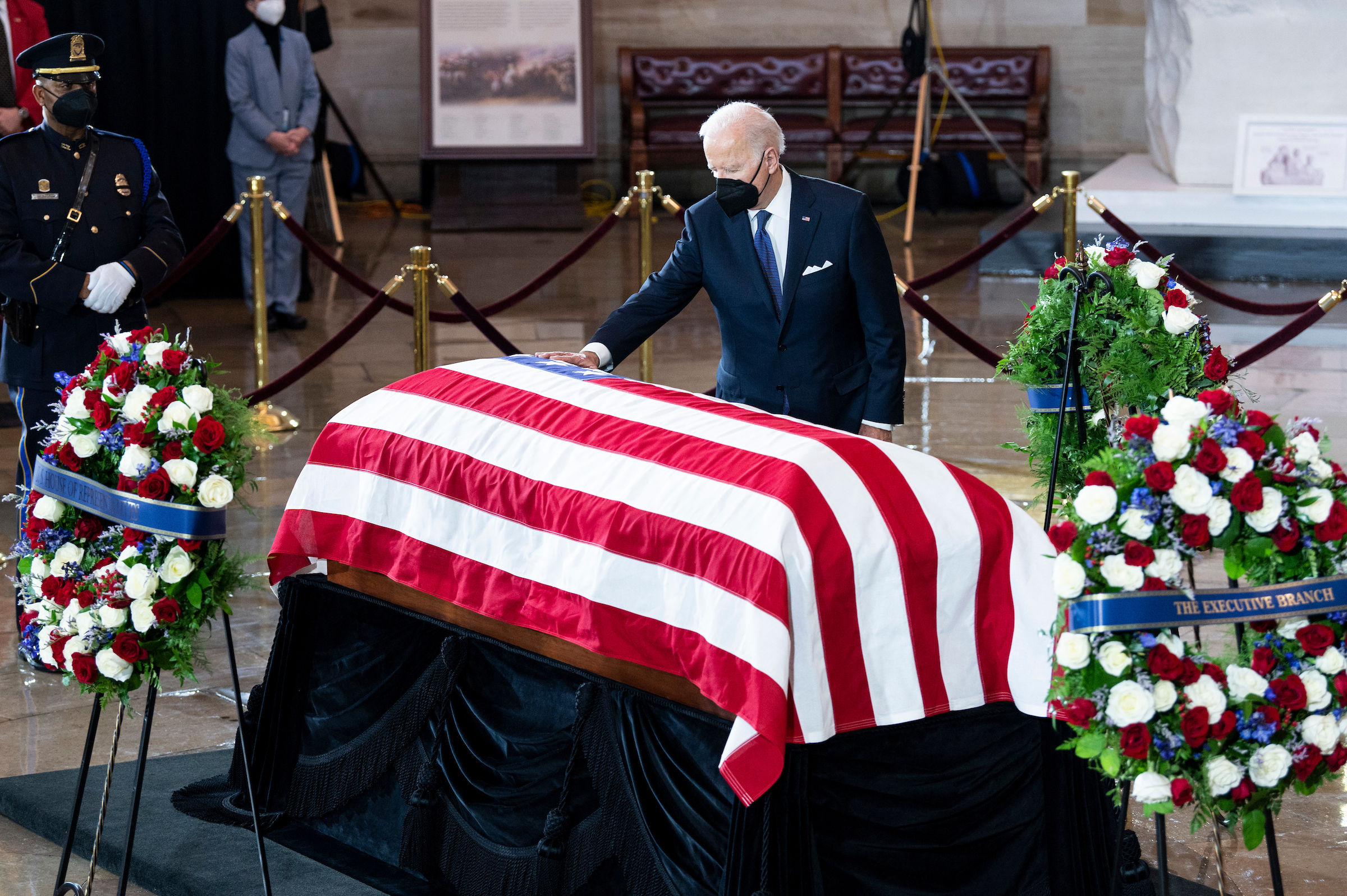 The late Senate Majority Leader Harry Reid predicted in the years since his retirement that it wasn’t a question of if — but when — the 60-vote threshold for breaking filibusters of legislation in the chamber would go away.

In 2019, the Nevada Democrat told CQ Roll Call that it was only a matter of time before the Senate would be “just like the House.” And Reid was not fretting that development.

After all, Reid was among the leaders who had detonated the so-called nuclear option, in his case eliminating the need to get 60 votes to break filibusters on most executive branch and judicial nominees, short of the Supreme Court, back in 2013.

So perhaps it was fitting that the day the Capitol paused to pay its last respects to the man from Searchlight, Nev. — who rose from a law student working the night shift as a Capitol Police officer to among the most powerful people in Washington — the Senate was again mired in a debate about the future of the filibuster.

President Joe Biden, who made an unannounced visit to the Capitol Rotunda on Wednesday after attending a nearby funeral service for retired Army Gen. Ray Odierno, was scheduled to be back Thursday for a Senate Democratic Caucus lunch to discuss the path forward for voting rights legislation, including possible changes to the chamber’s rules.

Biden was only in the Rotunda for a few minutes, stopping to touch Reid’s flag-draped casket and a wreath that had been placed earlier in the day on behalf of the Senate.

After leaving the Rotunda, Biden reportedly stopped in the Mansfield Room to speak with Reid’s widow, Landra, and other members of Reid’s family, a visit that ran about 20 minutes.

The White House said that both the president and Vice President Kamala Harris, who attended Wednesday’s lying in state ceremony for Reid, would continue to work the phones seeking Senate support for the voting rights legislation that was the focus of Biden’s speech Tuesday in Atlanta.

In the hallway near the Senate chamber, the president was asked to respond to the remarks from Senate Minority Leader Mitch McConnell, who earlier in the day called his Atlanta speech “profoundly unpresidential.”

“I like Mitch McConnell,” Biden said. “He’s a friend.”

The question might have seemed out of place on a day Reid was being honored at the Capitol, but McConnell’s comments were stark.

“Twelve months ago, this president said that ‘disagreement must not lead to disunion.’ But, yesterday, he invoked the bloody disunion of the Civthursdil War to demonize Americans who disagree with him. He compared a bipartisan majority of senators to literal traitors,” the Kentucky Republican said on the Senate floor.

“I have known, liked and personally respected Joe Biden for many years,” McConnell said. “I did not recognize the man at that podium yesterday.”

One last time to the Capitol

Wednesday morning’s arrival ceremony came with the traditional flourishes, though the crowd was somewhat more sparse, given the realities of the COVID-19 pandemic. Before the proceedings got underway, Senate Appropriations Chairman Patrick J. Leahy of Vermont was rather predictably chatting with ranking member Richard C. Shelby, R-Ala. Leahy could also be seen with his trusty camera taking photos of his Senate and House colleagues.

During the ceremony, Senate Majority Leader Charles E. Schumer talked about how Reid would have said he wouldn’t have wanted so much pomp and circumstance, and he spoke to the current debate within the Democratic Caucus.

“In so many ways, Harry was a guardian and steward of the Senate — literally and figuratively. He took great care of the Senate as an institution,” the New York Democrat said. “But he also knew that the Senate had to adapt to changing times.”

“As we confront the challenges of the coming weeks and months, I take comfort knowing that Harry is with us in spirit, walking alongside us as we continue the work he dedicated himself to for so many years,” Schumer said.

Hours after the formal ceremony, Schumer circulated a memo to his Democratic colleagues announcing a path forward to proceed to a voting rights measure without needing to reach consensus on potential changes to the filibuster rule at the outset.

Biden gave his remarks eulogizing Reid over the weekend, speaking at a Saturday memorial service in Las Vegas. The president was one of many, including Schumer on Wednesday, to highlight Reid’s penchant for hanging up the telephone without saying goodbye.

“Even when Harry was done in the Senate, he was never really done, as all of you from Nevada know. He’d ask me to campaign for an awful lot of Nevada Democrats, many of whom are here today. I could never say no, although you probably said, ‘Oh, God, he invited Biden into my district?’” the president said.

After many of the Reid family members had left the Rotunda, Nevada Democratic Sens. Catherine Cortez Masto and Jacky Rosen were among the first lawmakers to approach the casket. Cortez Masto was Reid’s clear choice to succeed him in 2016, and Reid and his Nevada political apparatus were critical in helping to bring Rosen to the House the same year. (She won election to the Senate two years later.)

Reid, who died on Dec. 28 at age 82, wanted to stay in the political game up until the end, a point underscored by Biden during his remarks at the memorial service in Nevada.

“But I talked to him often during this last election, taking his advice — and Landra can tell you — coming to his home on more than one occasion to visit and get his advice and where I should be going in order to win,” the president said.