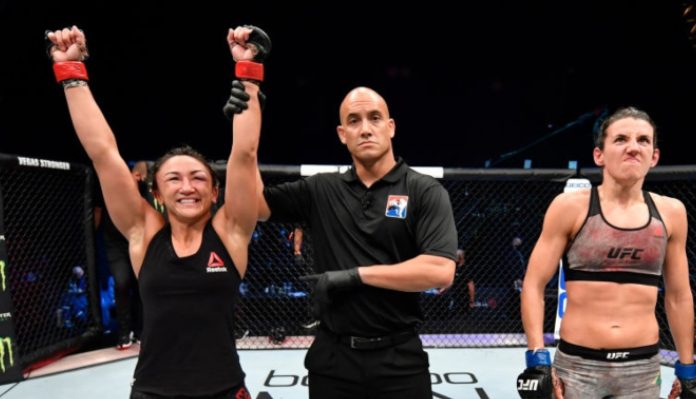 Carla Esparza believes she should be the one rematching Rose Namajunas next – even more so after Mackenzie Dern’s recent loss.

“I think there was talks of Mackenzie being in there (title picture), especially with a similar win record,” Carla Esparza told MMA Junkie. “I could see an argument for that and she’s got a lot of hype behind her too and she’s a really great fighter. She had explosive finishes on the ground, so I could’ve definitely seen an argument for that.

Carla Esparza (18-6) became the inaugural UFC 115-pound champion when defeating Namajunas at the conclusion of The Ultimate Fighter season 20 in 2013. “Cookie Monster” now rides a five-fight winning streak – her best since that time.

“I’m going to know a lot after the fight on Nov. 6,” Esparza said. “I think whatever happens after that fight is going to be very telling on what happens with my future and my next fight.

“Of course I want the title fight. I’ve been fighting for seven years to get back to this point, but I also want to stay active and fight because that’s what I like to do, so hopefully, it goes in a way that makes sense for the UFC to give me the next fight.