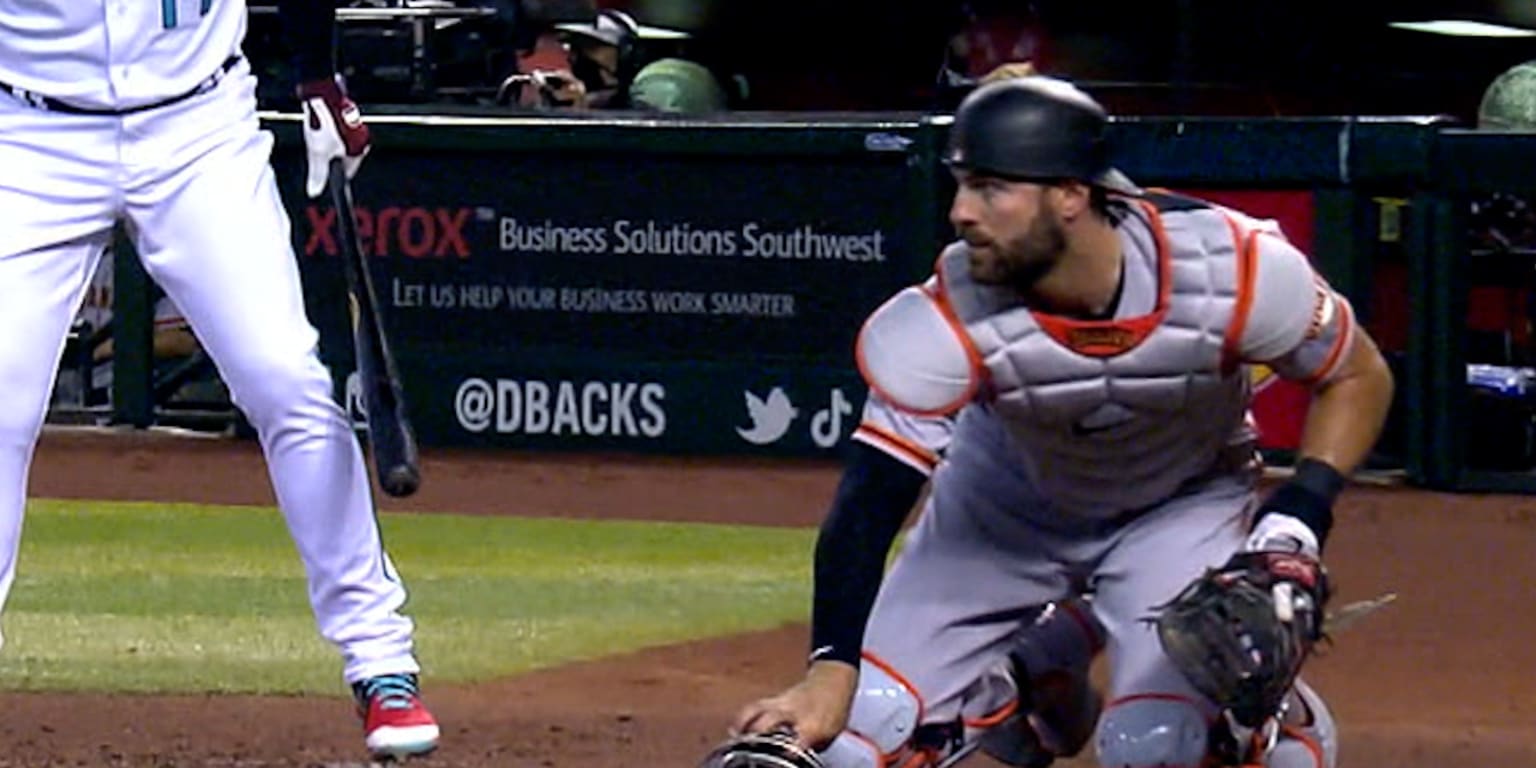 PHOENIX — Curt Casali knelt behind home plate with his mouth agape. In the dugout, Buster Posey could scarcely hide a grimace as he covered his face with his left hand.

The incredulity displayed by the Giants’ catching tandem encapsulated the bizarre nature of the play that unfolded in the bottom of the second inning of the Giants’ 3-1 loss to the D-backs on Tuesday night at Chase Field.

After the D-backs put runners on first and second with one out, Asdrúbal Cabrera stepped up to the plate to face right-hander Johnny Cueto. Cabrera took a first-pitch changeup in the dirt that Casali blocked, but Casali then took off his catcher’s mask and used it to stop the ball, which is illegal. Home-plate umpire Chris Guccione called Casali for an error, with both runners moving up 90 feet as a result of the miscue.

The official scorer called the mistake a “catcher’s balk,” but Casali technically violated Major League Baseball Rule 5.06(b)(3)(E), which allows runners to advance one base when, “A fielder deliberately touches a pitched ball with his cap, mask or any part of his uniform detached from its proper place on his person. The ball is in play, and the award is made from the position of the runner at the time the ball was touched.”

Casali and manager Gabe Kapler attempted to plead their case, but the ruling was upheld after the umpires briefly conferred on the field. Cabrera capitalized on the miscue two pitches later, lining a two-run double to right field to extend the D-backs’ lead to 3-0. Detached equipment errors are rare, though Red Sox catcher Christian Vázquez also violated the same rule during a game against the Royals in 2018.

“It’s unfortunate that it happened,” Casali said. “[The runners] moved up, and it probably cost at least one run. It ended up being two. I’ll own that one and just move on.”

Casali redeemed himself by launching a solo home run in the fifth, but the rest of the Giants’ hitters were stymied by old friend Madison Bumgarner, who tossed seven innings of one-run ball to even this four-game series. The Giants dropped to 67-40 on the season, though they maintained a 3 1/2-game lead in the National League West following the Dodgers’ loss to the Astros on Tuesday.

“I thought he hit his spots well,” Kapler said of Bumgarner. “He was very aggressive. He threw a lot of strikes, and I think that’s important against our lineup. We’re pretty good at fouling off pitches and getting to a pitch that we can handle. He just continued to make pitches, and he was able to get through our lineup several times and go pretty deep into that game.”

The Giants stacked their lineup with right-handed bats — center fielder Steven Duggar was the only left-handed hitter to draw a start — but they were held to seven hits despite delivering some hard contact against Bumgarner.

After Donovan Solano drilled a one-out double in the fourth, Thairo Estrada blistered a 99.3 mph liner to the left side, but shortstop Nick Ahmed made a leaping grap to snare the ball and then threw to second baseman Josh VanMeter to complete an inning-ending double play.

Austin Slater followed Casali’s 408-foot blast with a two-out double that bounced over the right-field wall in the fifth, but Kole Calhoun raced into foul territory and laid out to make an amazing catch on a flare off the bat of Kris Bryant.

Cueto was charged with the loss after giving up three runs (two earned) on six hits over five innings while walking four and striking out seven. Aaron Sanchez delivered three scoreless innings out of the bullpen to keep the Giants within striking distance, but the D-backs got shutdown relief from rookie Tyler Gilbert, who made his Major League debut, and Tyler Clippard to pick up only their second win in 12 games against the Giants this year.

“I don’t think we played our best, but they did a really good job,” Kapler said. “They played some very good defense as well. We hit some balls on the button. They made all the plays. I’d like to have another crack at that game, but it’s not in the cards. We’ll get ready for tomorrow.”