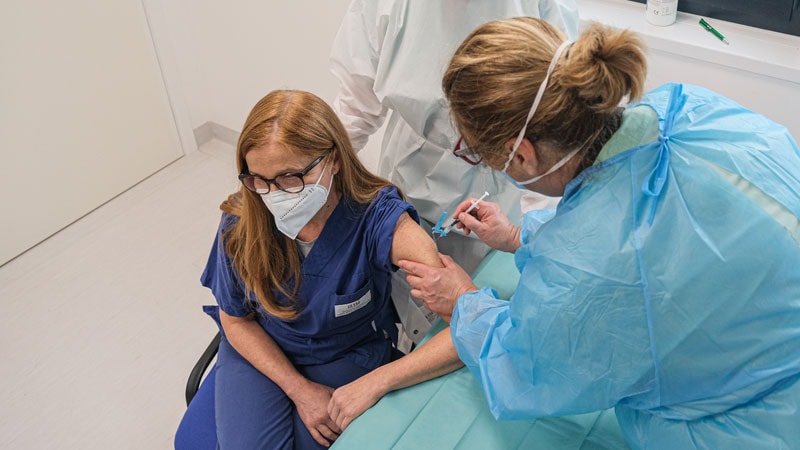 Editor’s note: This story was updated at 9:30 PM ET with the CDC director’s endorsement.

Centers for Disease Control and Prevention (CDC) Director Rochelle Walensky, MD, has signed off on an advisory panel’s earlier unanimous vote to recommend boosters for the  Moderna and Johnson and Johnson COVID vaccines.

The decision now means that millions of Americans are eligible to get a booster shot for either the Pfizer, Moderna or J&J COVID vaccines.

“The evidence shows that all three COVID-19 vaccines authorized in the United States are safe – as demonstrated by the over 400 million vaccine doses already given. And, they are all highly effective in reducing the risk of severe disease, hospitalization, and death, even in the midst of the widely circulating Delta variant,” Walensky said in a CDC news release.

She also signed off on the panel’s suggestion that individuals can mix or match the booster from any one of the three available COVID-19 vaccines.

The Advisory Committee on Immunization Practices (ACIP) recommended in a late afternoon 15-0 vote that everyone over age 18 who are at least 2 months past their Johnson & Johnson vaccine should get a booster, an endorsement that affects an estimated 13 million Americans.

Those eligible for a booster at least 6 months after their last Moderna shot are the same groups who can get a Pfizer booster.

These recommendations are in line with the US Food and Drug Administration’s Wednesday authorization of the boosters, along with the ability to mix-and-match vaccines.

There are an estimated 47 million Pfizer recipients and 39 million people vaccinated with Moderna who are now eligible for a booster dose, according to data presented by the CDC.

Before voting, some committee members expressed discomfort in broadly recommending boosters, stressing that there is very little evidence supporting the need for boosters in people younger than age 50.

“I can’t say that I am comfortable that anybody under 50  — an otherwise healthy individual — needs a booster vaccine at this time with either Moderna or Pfizer,” said ACIP member Sarah Long, MD, a professor of pediatrics at Drexel University in Philadelphia.

She said she would try to mitigate any potential harm by having some kind of age restriction on the otherwise worried well.

“We don’t usually have the vaccines [for] the worried well. We give it because we have a need that’s worth the risk, and there’s a burden of severity of disease,” Long said.

The evidence to date shows that all the vaccines authorized for use in the US continue to protect people well against severe COVID-19 outcomes, including hospitalization and death.

But breakthrough infections are on the rise, especially for people who initially received the Johnson and Johnson one-dose vaccine.

On Thursday, Pfizer released data from a study of more than 10,000 fully vaccinated people. Half were randomly assigned to get a booster of their Comirnaty vaccine, the other half were given a placebo.

Over the ensuing 2.5 months, there were five COVID-19 cases in the boosted group, and 109 in the group that got a placebo.

The data was posted in a press release and has not yet been peer reviewed, but it is the first to show clinical effectiveness of boosters at preventing COVID-19 infections

Data recently considered by the FDA and CDC for booster doses come from studies that were mostly shorter and smaller. These studies looked at biomarkers of immunity like the concentration of antibodies in a person’s blood and the percentage of study participants who saw a boost to those antibodies.

The studies demonstrated that boosters indeed restore high levels of antibodies, but unlike the newest Pfizer data they were not able to show that these antibodies prevented COVID-19.

These studies also weren’t powered to pick up on any less common safety problems that might arise after another dose of the shots.

In the end, however, the panel felt it was more important to be permissive in allowing boosters so that individuals and their doctors could be free to make their own decisions.

“The decision made by the FDA and the ACIP recommendations, I think, reflect the real world. The public is going to do what they feel driven to do. This at least adds a scientific review of the currently available data,” said Jay Varkey, MD, an infectious disease physician and associate professor at Emory University in Atlanta, who was not involved in the ACIP’s deliberations.

Varkey said he would recommend that anyone who is younger than 65, and who has no underlying medical conditions such as diabetes or obesity, speak with their doctor about their individual benefits and risks before getting a booster.

The CDC is planning to release a detailed suite of clinical considerations to help people weigh the risks and benefits of getting a booster.

Safety updates presented at the meeting show that serious adverse events after vaccination are extremely rare, but in some cases, they may rise above the risk for those problems generally seen in the population.

Those rare events include the disabling autoimmune condition Guillian-Barré syndrome and the platelet disorder thrombosis with thrombocytopenia (TTS), which causes blood clots along with the risk of excess bleeding because of a low platelet count.

Both can occur after the J&J vaccine. Out of 15.3 million doses of the vaccine given to date, there have been 47 cases of TTS and five deaths. These events are more common in younger women.

The mRNA vaccines, such as those from Pfizer and Moderna, can cause heart inflammation called myocarditis or pericarditis. This side effect is more common in men 18 to 24 years old. The reported rate of myocarditis after vaccination is 39 cases for every 1 million doses.

In voting to permit boosters, committee member Wilbur Chen, MD, a professor at the University of Maryland’s Center for Vaccine Development, said he hoped boosters wouldn’t give Americans false confidence.

Chen stressed that ending the pandemic would depend on “a multilayered approach” that includes masking, social distancing, avoiding large crowds indoors, and convincing more Americans to take their first doses of the vaccines.

“We’re not just going to vaccinate ourselves out of this situation,” Chen said.