Champions League: All-English final or Spain to reign in semi-finals? 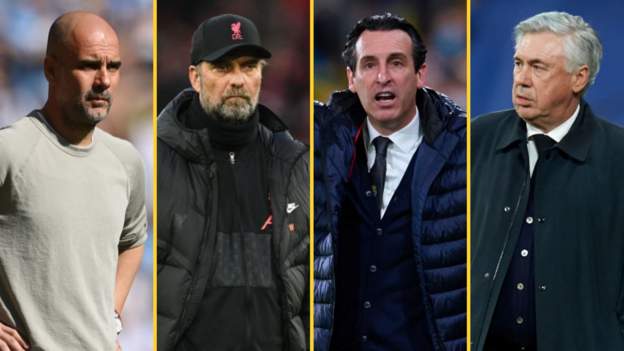 The blockbuster clash of the Premier League and La Liga in this season’s Champions League semi-finals got off to a sensational start at Etihad Stadium – and there’s plenty more still to come.

Manchester City and Real Madrid staged a seven-goal European classic in their first leg, with Pep Guardiola’s side claiming a 4-3 win.

On Wednesday, Liverpool host Villarreal in the first leg of the second semi-final at Anfield.

Can Real come back? Will we see another all-English final this year? Can Villarreal upset the odds? BBC Sport looks at the major narratives at play in the final four of Europe’s premier club competition.

An all-English final? A double? A quadruple?!

The Premier League is represented by its top two, a pair who have largely swept aside all they have faced this campaign as they go toe-to-toe for every trophy on the table.

City and Liverpool are favourites to win their respective semi-finals and continue England’s recent dominance of the Champions League.

After being absent from the final for five seasons between 2013 and 2017, the Premier League has provided five of the past eight finalists, with two of the past three showdowns being all-English affairs. 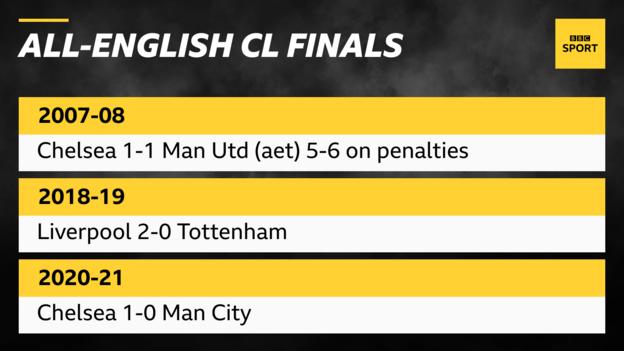 For Liverpool, this is familiar territory. They are bidding for a third final in five seasons, having lost to Real Madrid in 2018 before beating Tottenham to lift the trophy 12 months later – their sixth time overall.

They are also hoping the Champions League will be part of a historic quadruple this season. They already have the Carabao Cup in their possession, are through to the FA Cup final and trail City by a single point with five Premier League games remaining.

City are looking for a double themselves while desperately hoping to follow a similar trajectory to the Reds in Europe as they bid to make amends for their agonising 1-0 defeat by Chelsea in last year’s final.

They have been wildly successful domestically, but the Champions League has become something of an obsession for big-spending City under Guardiola, who has won it twice before as boss of Barcelona.

Tuesday’s first leg brought the victory they hoped for, although the winning margin could have been so much better.

City led by two goals three times in the match, but Real simply would not lie down, with Karim Benzema’s outrageous Panenka penalty ensuring just one goal separates the sides before next week’s second leg.

“The quality of Real Madrid is such they can punish you,” Guardiola told BT Sport after Tuesday’s first leg. “What we have done with the ball and without the ball, creating chances and chances and chances, I can’t ask anything else.

“We go to Madrid to win. Both teams want to attack and have the quality to play. Football is a fantastic spectacle.

“Congratulations to Carlo and his team as they are so good. At the same time, we saw ourselves that we can be there.”

If all you knew of Unai Emery was his disappointing spell as Arsenal boss from 2018 to 2019 or his European struggles at Paris St-Germain prior to that, you might wonder what all the fuss was about.

But the 50-year-old has a stellar reputation in his native Spain, courtesy of his fine work with Valencia, Sevilla and now Villarreal.

It was with the second of those three that he truly earned his ‘cup king’ tag, leading them to three successive Europa League titles between 2014 and 2016. He added a fourth victory in the competition with his current club last season to earn them a Champions League spot.

“The right man at the right place – he is doing a great job,” was European football correspondent Kristof Terreur’s summary on the BBC’s Euro Leagues podcast. “He is an ideal manager for an underdog side. You won’t name star players at Villarreal but he builds teams.

“People laugh at him because of what happens at PSG and Arsenal but maybe he just didn’t get time. He is a brilliant coach.”

This season under him, the ‘Yellow Submarine’ are responsible for ruthlessly and efficiently sinking two of Europe’s giants, beating two-time European champions Juventus in the last 16 and, even more impressively, six-time winners Bayern Munich in the quarter-finals.

Liverpool are the latest European giant in their sights.

European football expert Guillem Balague said: “Villarreal are from a village of 50,000 people but have the fourth-biggest wage bill in Spain. We shouldn’t be surprised they are succeeding.

“But it is the semi – you don’t get there by chance. Yes, Villarreal have a chance.”

Real refusing to lie down

Between 2015-16 and 2017-18, Real Madrid were invincible in Europe, winning three successive Champions League titles as Zinedine Zidane led a squad packed with players at the top of their game.

The current side, managed by Carlo Ancelotti, are not of the same calibre, but do still have some of the stars of that era and certainly know how to win games of football, as their 15-point lead in La Liga attests.

In each of the past two rounds, Real have looked down and out, only for one of their superstars to summon something from nowhere and turn their fortunes around.

In the last 16 against Paris St-Germain, it was Karim Benzema’s second-half hat-trick in the second leg that turned a 2-0 aggregate deficit into a 3-2 win. In the quarters, Chelsea led them 4-3 on aggregate with 10 minutes of the tie left, only for Luka Modric to pull out a wonder pass and set up Rodrygo to level, before Benzema got the winner in extra time.

They were at it again at Etihad Stadium, digging deep to keep coming back at City despite being dominated in the opening 20 minutes and despite then conceding second-half goals to Phil Foden and Bernardo Silva.

The tie with City is a record 31st Champions League semi-final for the club, and they are going for an unmatched 17th victory.

“We have a great dream for the second game in the Bernabeu and we hope to have the chance to go to the final,” said boss Carlo Ancelotti after Tuesday’s game.

“The first 20 minutes were really difficult but slowly we were able to come back into the game to keep qualification open.

“We need this [some magic] as we are going to play against a really strong team. We competed today and we need to do that more in our stadium.”