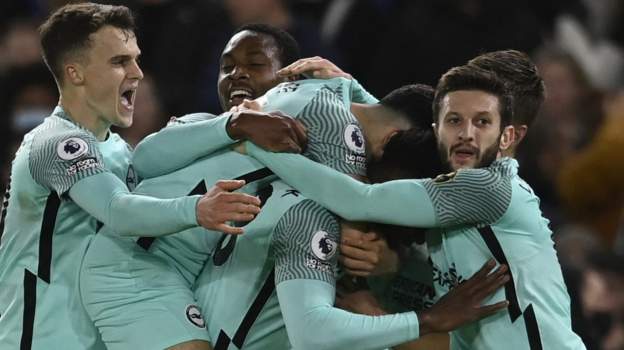 Substitute Danny Welbeck scored a dramatic stoppage-time equaliser for Brighton to deny Chelsea victory and deal a blow to their hopes of keeping pace with Manchester City at the top of the Premier League.

Chelsea looked set to move three points clear of fellow title contenders Liverpool when Romelu Lukaku marked his first top-flight start for two months by giving his side a lead, which they held until the 91st minute.

On a bad night for Chelsea, they also lost defenders Reece James and Andreas Christensen to injury.

They head into 2022 second in the table – one point above third-placed Liverpool, who they face on Sunday at Stamford Bridge (16:30 GMT).

But they trail Manchester City by eight points after Pep Guardiola’s side won 1-0 at Brentford.

Chelsea blow it at the death

On what felt like a pivotal night in the title race, Chelsea closed 2021 – a year to remember thanks to their Champions League triumph – on a disappointing note.

The mood was upbeat when Lukaku scored for the second successive game.

After coming off the bench to inspire the Blues to victory at Aston Villa on Sunday, he marked his first league start since 16 October with a busy performance capped by his first-half header.

Yet Chelsea could not hold out for victory and have now dropped 11 points from their last eight league games, with three draws in their last four matches.

Another concern for Tuchel will be the mounting injuries, with England defender James, who limped off in the first half, and Denmark defender Christensen, who did not appear for the second half, joining the list of casualties.

Ruben Loftus-Cheek (ankle) and Thiago Silva (hamstring) missed this game along with Ben Chilwell, who is to undergo surgery. In addition, Timo Werner has not played since 11 December after testing positive for coronavirus, while N’Golo Kante came off the bench despite suffering a knee injury against Villa.

With Chelsea facing six matches in the Premier League, Carabao Cup and FA Cup in January, they can ill afford any more absences among key players.

While the sight of Lukaku celebrating in front of Chelsea fans was pleasing for Tuchel, the German could now be forced to turn to the transfer window to ensure his side stays in the hunt for trophies.

On 26 December, Brighton gave their fans a late Christmas present by breaking their 12-match winless run in all competitions with a 2-0 victory over Brentford.

And their travelling supporters were jubilant again after Welbeck’s equaliser – the first time Brighton have scored at Stamford Bridge – sealed a thoroughly deserved point.

It was Welbeck’s second Premier League goal against Chelsea, 11 years and 45 days since scoring on his first appearance against them in the competition in November 2010 for Sunderland.

Brighton, who end the calendar year in a solid 10th position in the table, looked set for disappointment as Adam Lallana, Yves Bissouma and Alexis Mac Allister were all denied by Edouard Mendy.

It is their ninth draw in 18 league games, and the Seagulls head into 2022 in confident mood and with 10 more points than they had at this stage last season.