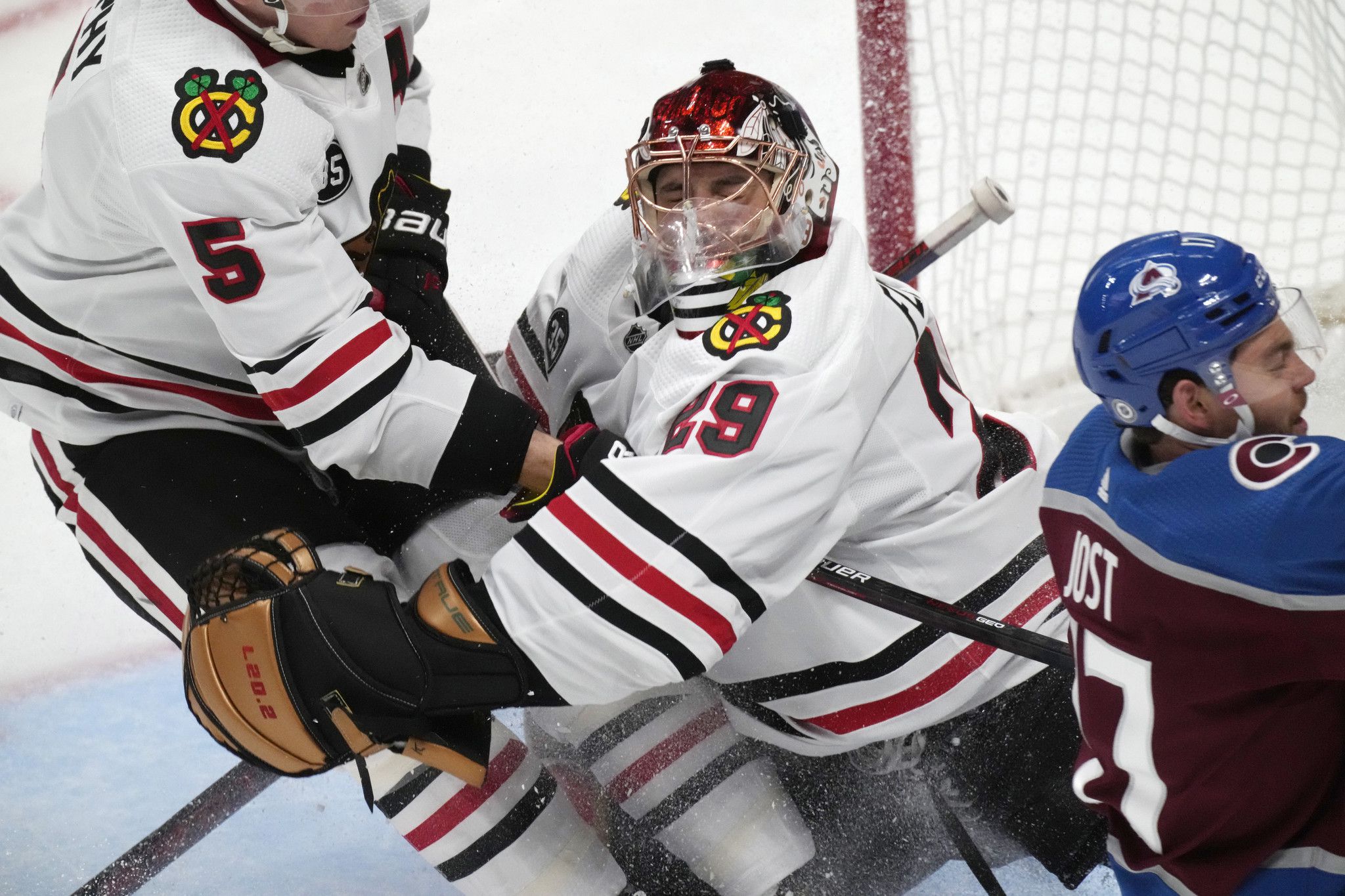 DENVER — The Colorado Avalanche raced out to three goals in the opening 10 minutes to send the Chicago Blackhawks to a 4-2 defeat Wednesday night at Ball Arena — the third straight season the Hawks have opened with a loss.

Dominik Kubalík and Connor Murphy accounted for the Hawks goals, but as a whole the visitors didn’t look ready to take a regular-season bow on prime-time national TV.

“Overall the start did us in,” he said. “We need to be better. We will be better. We’ve got good players, and the stuff that happened is very correctable.”

The Hawks set out to get bigger in the offseason, but it didn’t seem to matter when they were the ones taking many of the big hits, getting knocked off the puck or knocked to the ice.

Hawks management also made it its mission to improve the defense, bringing in new blood Seth Jones and Jake McCabe, but they were literally tripped up by coverage lapses.

McCabe appeared to trip on teammate Tyler Johnson’s skate and stumbled to the ice while trying to turn and defend Jack Johnson, who streaked through the neutral zone unchallenged and found himself one-on-one against Marc-André Fleury for the opening goal 4:26 into the game.

Gabriel Landeskog scored 1:22 later and Bowen Byram at the 9:34 mark.

The Hawks initially matched the Avalanche attack for attack, but Colorado’s speed soon turned possession into a lopsided affair, with the Avalanche maintaining a 76% Corsi-for percentage and battering Fleury with 17 shots on goal in the first 12 minutes.

The Hawks had two in that span and went more than nine minutes between shots on goal.

After the Avalanche’s third goal midway through the first period, Colliton called a timeout.

The Hawks settled down by the end of the first period, drawing a penalty with 4:30 left. The second power-play unit came through, with Ian Mitchell setting up Kubalík for a one-timer. Henrik Borgström also was credited with an assist.

“It would be better to get a win,” Kubalík said. “After that goal we got a little better. We got a little momentum after that, we just couldn’t score right away. I think it would be a different game.”

Murphy banked in his third-period goal off the post from the blue line.

The Avalanche were missing star center Nathan MacKinnon, who tested positive for COVID-19. Last season’s Hart Trophy finalist led the team in assists (45) and was second in points (65).

“He’s an elite player. We can’t minimize that,” Hawks coach Jeremy Colliton said before the game, but “they’re not a one-player team. They have depth, they have speed, they have offensive weapons everywhere.”

The Avalanche managed just fine without him.

A daily sports newsletter delivered to your inbox for your morning commute.

Nazem Kadri poked in their fourth goal on a counterattack with 3:48 left in the second period.

Darcy Kuemper made 30 saves in his Avalanche debut, including a big stop against Kirby Dach on a solo breakout after a takeaway. Dach had other great chances among his five shots on goals.

“Yeah, it sucks,” he said. “If I score those it might be a different game.”

Even a nice seam pass from Borgström to Patrick Kane midway through the third period proved fruitless.

It was a rough night for Fleury in his first game as a Hawk: four goals allowed on 36 shots and an .889 save percentage. The game was chippy throughout, punctuated by Landeskog slamming Dach into the boards while he was in a vulnerable position — on one knee passing the puck up the ice.

Johnson came rushing in to fight, and Calvin de Haan mixed it up with Mikko Rantanen. Landeskog was penalized for boarding.