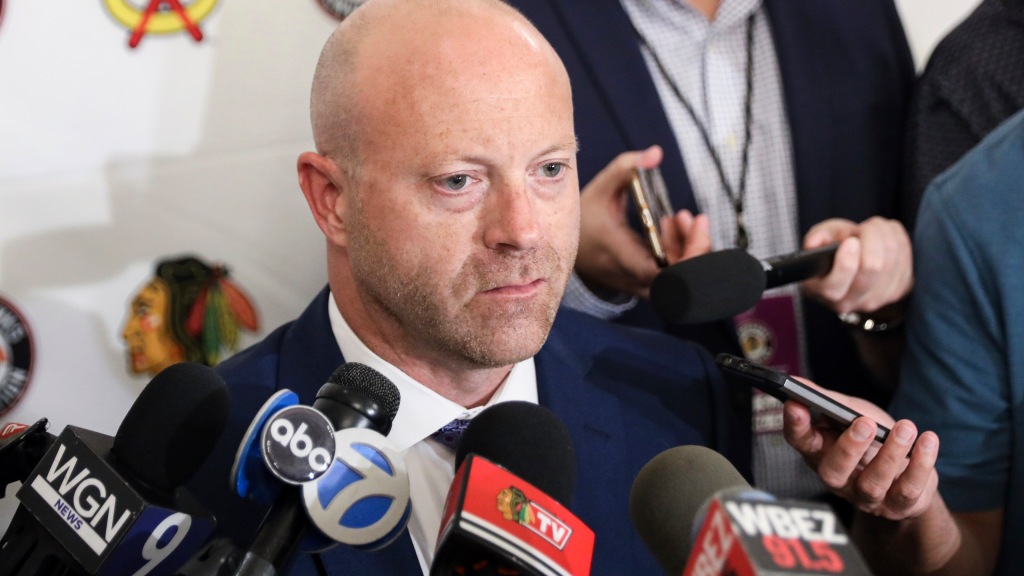 Back in May 2021, Brad Aldrich, former video coach of the Chicago Blackhawks during the team’s Stanley Cup run in 2010, was accused of sexual assault by two unnamed players on the team. In the months since the original report, which sparked a major investigation, there have been a lot moving pieces around this story as it continues to unfold.

In late October, however, the case got kicked wide open with the release of a 107-page report from law firm Jenner & Block after an independent investigation sanctioned by Chicago. There’s a lot of information to sift through, especially in the wake of the recent findings, but here is everything you need to know about the Blackhawks sexual assault scandal and the fallout from it all.

Rick Westhead of TSN was one of the first NHL reporters to break the story of the unknown Blackhawks player who filed a lawsuit against the team for ignoring allegations that he and another player were sexually assaulted by video coach Brad Aldrich during the team’s 2010 Stanley Cup run. Said incident allegedly occurred in May 2010, during the Blackhawks’ Western Conference Final series and before the team bested the Philadelphia Flyers in six games in the Stanley Cup Final.

The report also claimed that the unnamed player went to Chicago’s mental skills coach, James Gary, who reportedly dismissed the accusations. The unnamed player went to the NHL Players’ Association after the fact, but nothing came of it as well. Said player also alleged Aldrich sent him inappropriate texts then coerced him with threats if he did not engage in sexual activity.

Aldrich is a registered sex offender in Michigan after being convicted of fourth-degree criminal sexual conduct — which involved a student — in 2013.

At the beginning of June, a report surfaced from Westhead at TSN which stated that a former high school hockey player — who was allegedly assaulted by Aldrich — was suing the Blackhawks for giving the coach a positive reference letter for employment despite knowing the allegations against him.

In this report, it is stated that the 16-year-old high school player was sexually assaulted in March 2013 when Aldrich was an assistant coach on a team in Michigan.

In mid-June, another story came to light from TSN which alleged that the Blackhawks’ top management and front office refused to file a report with the police in relation to the accusations made against Aldrich.

In the TSN report, we got our first mention of actual names inside the organization. According to TSN, general manager Stan Bowman, team president John McDonough, vice president of hockey operations Al MacIsaac, skills coach Paul Vincent, and mental skills coach Gary all met to discuss the allegations made from the two anonymous players.

Vincent, in speaking with TSN, alleged that his request to contact the Chicago police had been denied by the group.

During this time, allegations came to light that Aldrich’s activities were “an open secret” within the Blackhawks organization.

In mid-September, the Blackhawks filed amended motions to dismiss both lawsuits related to Aldrich due to a reported lack of evidence about the alleged recommendation letter.

One motion focuses on the lack of evidence the Hawks gave Aldrich a recommendation letter, calling that claim “demonstrably false.”

As of October, however, both lawsuits are still ongoing.

In late September, a report was released which stated that Miami University was found to have acted appropriately when it learned of Aldrich’s sexual assault allegations. Aldrich only worked at the school in Ohio for five months in 2012, between his time with the Blackhawks and working at the high school in Michigan.

In late October, Jenner & Block released its 107-page report on its findings in relation to the Blackhawks and Aldrich. As a consequence of said report, Blackhawks general manager Bowman stepped down from his position alongside vacating his post as the GM of the 2022 U.S. Olympic Men’s Ice Hockey Team.

The NHL has fined the Blackhawks organization $2 million due to “the organization’s inadequate internal procedures and insufficient and untimely response” to the situation.

NHL commissioner Gary Bettman is set to meet with both Cheveldayoff and Quenneville to discuss their involvements in the matter.

On Tuesday, Cheveldayoff put out a statement about the investigation results.

The following is a statement from Winnipeg Jets General Manager Kevin Cheveldayoff regarding the results of the investigation released today: pic.twitter.com/sAp9pWWD2t

In a team statement, the Blackhawks apologized to the victims and promised to do better.

It is clear the organization and its executives at that time did not live up to our own standards or values in handling these disturbing incidents. We deeply regret the harm caused to John Doe and the other individuals who were affected and the failure to promptly respond. As an organization, we extend our profound apologies to the individuals who suffered from these experiences. We must — and will — do better.