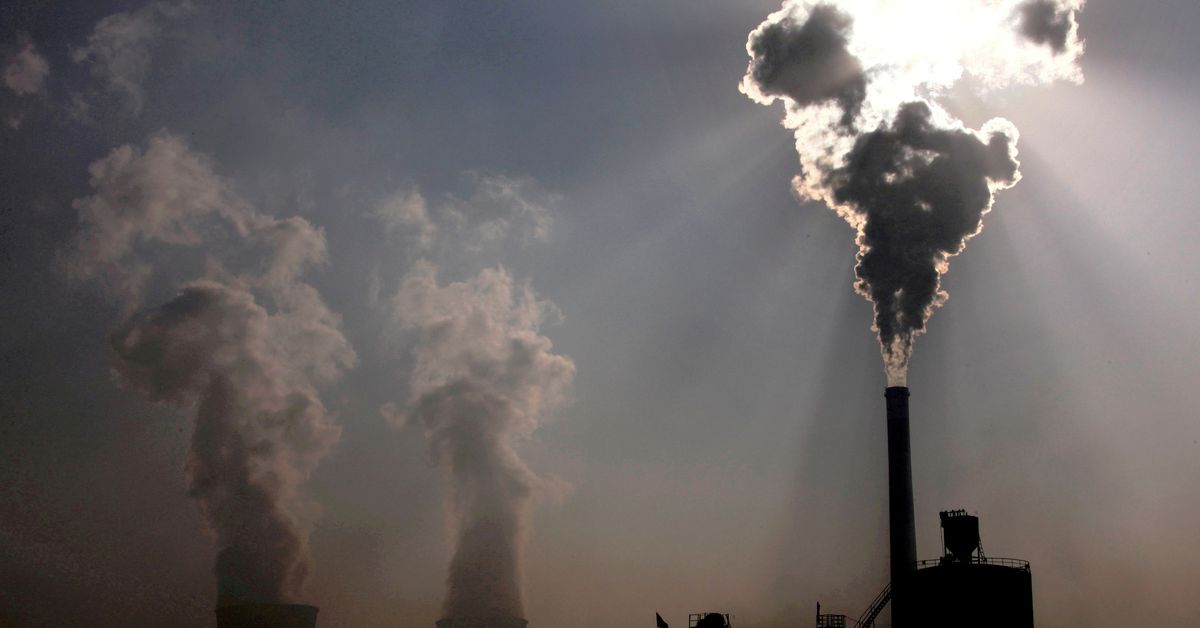 A coal-burning power plant can be seen in the city of Baotou, in China’s Inner Mongolia Autonomous Region, October 31, 2010. REUTERS/David Gray

BEIJING, Oct 27 (Reuters) – China’s thermal coal futures slumped to their lowest in more than a month on Wednesday, marking a sixth consecutive day of declines, after the country’s state planner said it would conduct “clean up and rectification” work on coal storage sites.

The most-traded thermal coal contract on the Zhengzhou Commodity Exchange fell 10%, hitting its daily trading limit on Wednesday morning, and is down about 40% from the record highs hit last week on the back of a coal supply shortage.

Other commodities prices followed suit, trading largely in the red on Wednesday morning. Coking coal and coke futures also hit their limit down of 9%, while liquefied petroleum gas fell 4.8%.

Petrochemicals such as methanol and ethylene glycol fell 6.9% and 4.3% respectively, while urea , which uses coal as feedstock, declined 3.8%.

China, the world’s biggest producer and consumer of coal, has been grappling with a power crunch. Coal-fired power accounts for about 60% of the country’s total electricity generation, leading to electricity rationing for industry in many regions and hurting growth in the world’s second-largest economy. read more

Beijing has taken a raft of measures to raise coal and power supplies, including approving new coal mines and allowing power firms to raise prices for customers. read more

The National Development and Reform Commission (NDRC) said in a statement late Tuesday that there were many unlicensed coal storage sites around mines in the main producing areas of Shanxi, Shaanxi and Inner Mongolia, “making it convenient for illegal traders to hoard coal,” and “seriously disrupting” the market’s operations.

Besides stepping up investigations and strengthening supervision, the three areas also need to establish a reporting system for legal and compliant coal storage sites, and ban those without approvals, the NDRC said.

They should also crack down on illegal profit-making activities such as hoarding and driving up coal prices by using illegal coal storage sites, the statement said.

In a bid to ease the supply crunch, China has been pushing coal miners to ramp up output and increasing imports so power stations can rebuild stockpiles before the winter heating season, but analysts say shortages are likely to persist for at least another few months. read more

Average coal prices for next year are forecast to ease to 700 yuan from 912 yuan in 2021, Morgan Stanley said in a research note to clients on Tuesday.

“We highlight the risk of disappointing average selling prices for coal miners on the back of government intervention,” it said.

“Near term, we see policy measures increasing the incentive for producers to push coal production higher for the winter peak season,” it added, adding that moderating demand will further narrow the supply-demand gap.

Profits at China’s industrial firms rose at a faster pace in September despite surging prices and supply bottlenecks, mainly due to stellar growth in mining and raw materials industries, although power firms profits were squeezed as they struggled to shake off the high costs of coal. read more

Reporting by Shivani Singh in Beijing and Shanghai newsroom. Editing by Gerry Doyle