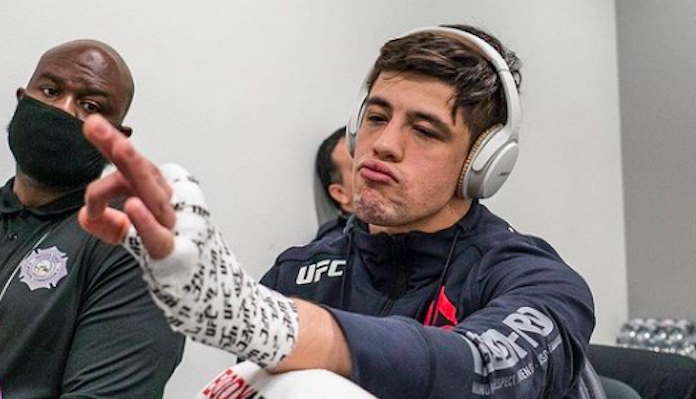 Moreno and Figueiredo had their fourth fight for the flyweight title at UFC 283 in Brazil on Saturday night. The two were 1-1-1 against each other, so the fourth fight was set to settle it all and it was Moreno who won by doctor stoppage after the third round.

The Mexican controlled the fight from start to finish, but according to his head coach, Sayif Saud, Moreno suffered a serious knee injury and was sick just weeks before the fight.

“Brandon had a lot of adversity in this camp,” Saud said on The MMA Hour. “Brandon hurt his knee really badly and we kept that a secret. Nobody knew about it, and not only did he have all of those other things to deal with, but physically (as well). He got really sick last month. He got that flu (that was going around) and for two weeks, he was so sick. He would do rounds, hack s**t up, blow his nose, and, ‘Yes sir, yes sir,’ but he was struggling.”

According to Saud, Brandon Moreno’s knee popped but they knew the entire time they couldn’t pull out. Instead, they taped up Moreno’s knee and were cautious throughout the rest of the camp.

“It was serious,” Saud said. “It popped, but this guy would fight with one leg. There was never a time in Brandon’s mind that he wasn’t fighting. That’s the spirit of a champion… But we worked through it. I made him tape up his knee (every day), and thank God we made it through.

“He never showed any mental weakness or mental fatigue,” Saud continued. “The guy is just a tank, so we just powered through it all, and there was some tenuous moments. I had to keep balanced to make sure he didn’t hurt himself more. That guy will run through a wall, he’ll do whatever it takes. There was a lot that happened in the camp, even though it was short camp.”

With Moreno winning, he is once again the UFC’s flyweight champion and is now 21-6-2 as a pro.

What do you make of Brandon Moreno having a serious knee injury prior to UFC 283?