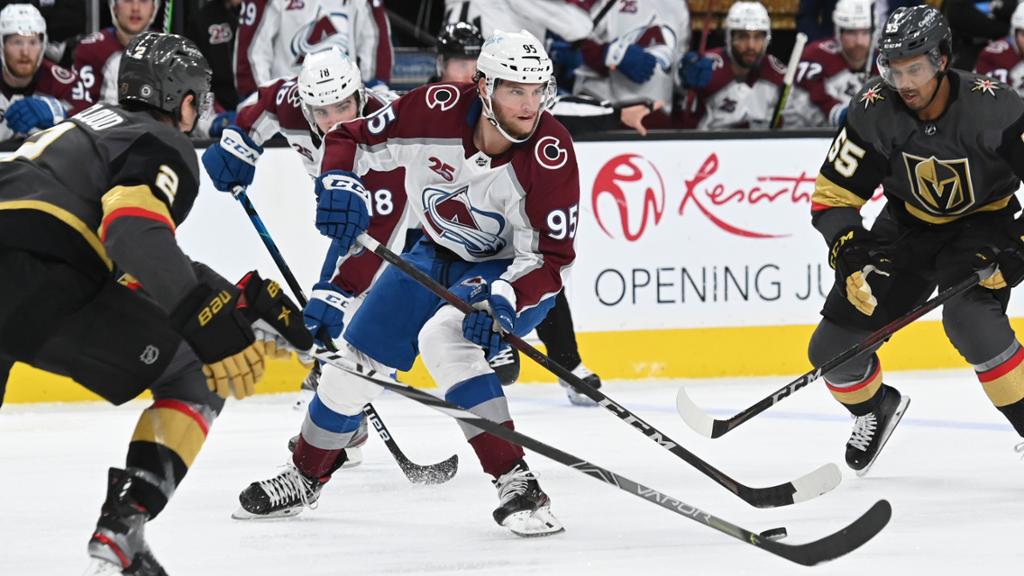 The Colorado Avalanche defeated the Vegas Golden Knights 3-2 in overtime at Ball Arena on Wednesday in Game 2 to take a 2-0 lead in the second round. The best-of-seven set now shifts to Vegas for the third contest of the series on Friday at T-Mobile Arena.

Mikko Rantanen scored the game-winning goal in overtime–his second career playoff marker in the extra frame–while netminder Philipp Grubauer made a postseason career high 39 saves and Brandon Saad found the back of the net for the fifth consecutive contest. Reilly Smith and Alec Martinez scored for the Golden Knights, with Shea Theodore assisting on each of the tallies. Vegas goaltender Marc-Andre Fleury started in between the pipes for the first time in the series and let in three goals on 25 shots.

The Avs were outshot 41-25 in Game 2 but converted twice on the man advantage (2-for-6), the third straight game the club has registered multiple power-play goals in the postseason.

Colorado will face a full capacity crowd for the first time this season at T-Mobile Arena for the next two outings, as Games 3 and 4 are set to be played in a full building in Las Vegas on Friday and Sunday. If needed, the series will return to the Mile High City for Game 5 on Tuesday.

The Avs hold a 2-0 series lead against the Golden Knights, while owning an all-time 2-0-1 mark versus the club in the postseason. Colorado jumped out to a 1-0 lead in the set after earning a 7-1 victory in Game 1, as the club’s top line of Nathan MacKinnon (two goals, one assist), Gabriel Landeskog (one goal, two assists) and Mikko Rantanen (one goal, one assist) combined for eight points on the night. While the Avalanche put together a dominant performance in the first contest of the set, Game 2 was a tightly checked match throughout and the squad needed its depth to come through as Brandon Saad and Tyson Jost each scored, with Samuel Girard picking up two assists as well.

The clubs will face off at T-Mobile Arena in the playoffs for the first time on Friday. The Avs owned a 2-2-0 record when visiting Vegas in the regular season after winning the last meeting 2-1 on May 10. The Avalanche will look to carry its momentum from the first two matchups into Game 3, as the team has outscored the Golden Knights 10-3 thus far and is averaging 5.00 goals per game and 1.50 goals-against per contest through the first two games of the set.

Colorado traveled to Vegas on Thursday and had a day off the ice. The club used the same lineup in Game 2 as they did in the first matchup of the series and is likely to move into Game 3 with the same squad.

Vegas returns home to T-Mobile Arena to play in front of approximately 18,000 fans, the first time the club will play in front of a full capacity venue. The Knights own a 2-2 mark in the playoffs on their home territory, while winning their last contest in Southern Nevada (Game 7 versus Minnesota) by a score of 6-2. The squad has converted on 25 percent of its power-play chances at home in the postseason, while going 4-for-5 (80 percent) on the penalty kill.

As the home team, Vegas sports an 18-10 all-time record in the playoffs, despite holding a 4-6 mark in its last 10. Netminder Marc-Andre Fleury owns a 2-2 record, 1.74 goals-against average and .929 save percentage at T-Mobile Arena this postseason.

Samuel Girard produced his first multi-point effort of the playoffs and his fourth of his career with two assists on the night in Game 2. Girard has totaled five assists through six games, slotting in at third among blueliners and tied for seventh on the roster with five points. The 23-year-old has also averaged 22:20 of ice time, the third highest on the club, while recording eight hits in the postseason for the fifth most on the Avs.

Girard, who is in fourth NHL season, has tallied one goal and 16 assists in 33 postseason contests all time. His five points this season are already the second most points he has had in a playoff run, just five behind his career-high 10 points (one goal, nine assists) that he set in 2020.

Although Alex Tuch has yet to find the scoresheet through the first two games against the Avalanche, the forward has driven play, used his speed and been one of the Golden Knights top offensive producers throughout the postseason. He has registered three goals and two assists in nine games, ranking tied for second on the club in both points (five) and goals. Tuch has also notched a power-play marker in the playoffs, joining Alec Martinez as the only players on the roster to do so.

The Syracuse, New York, native is in his fourth campaign with Vegas and has appeared in 56 postseason contests, compiling 18 goals, 11 assists and nine power-play points (five goals, four assists).

Philipp Grubauer leads the league in almost every goaltending category, as the netminder sports a 6-0 mark, 1.66 goal-against average and .943 save percentage. His six wins are tied for first (Boston Bruins’ Tuukka Rask and Tampa Bay Lightning’s Andrei Vasilevskiy), while his 10 goals against, goals-against average and save percentage all pace the NHL among keepers who have played in four or more games.

Brandon Saad has scored in five consecutive games, tying Michel Goulet (1985) for the third-longest postseason goal streak in franchise history, only Claude Lemieux (seven games in 1997) and Joe Sakic (seven games in 1996) have longer runs in the playoffs. His five goals in the postseason are also the second most on the Avalanche.

The Avalanche heads into Game 3 with a 2-0 lead for the 16th time since moving to Denver and 18th time in franchise history. Colorado sports a 14-1 mark when winning the first two games of best-of-seven series, while the Avs/Nordiques are 14-3 in such scenarios all time, including a 1-0 record this postseason after defeating the Blues in four games.

The Avalanche is undefeated (2-0) when away from home in the postseason, being just one of two teams (Winnipeg Jets) to sport a perfect record on the road thus far… Cale Makar has notched at least a point in three straight games, recording six points (one goal, five assists) over that stretch. His eight points (two goals, six assists) in the playoffs lead all Avalanche defensemen and are tied for second among NHL blueliners … Colorado owns a 1-0 record in overtime this postseason, while boasting a 41-31 all-time playoff overtime mark and 31-22 record since moving to Denver… The Avs have tallied two power-play goals in both contests against the Golden Knights, going 4-for-11 (36.4 percent) on the man advantage. Overall the club has scored multiple goals while a man up in three consecutive contests and four times in the playoffs, owning the best power-play percentage in the NHL (43.5)… Philipp Grubauer has won 10 straight postseason decisions going back to the 2020 Stanley Cup Playoffs and is the 10th goaltender in NHL history to do so. Grubauer is 6-0 this postseason and has tied the franchise record of six straight playoff wins set by Mario Gosselin with Quebec in 1987… Nathan MacKinnon is second in the NHL in points (13) and leads the league in goals (eight) this postseason, while only playing six games. He has two goals and two assists through two matchups with the Knights… Mikko Rantanen has found the scoresheet in 16 straight playoffs games going back to last season. He has collected 26 points (nine goals, 17 assists) over that stretch, including 10 points (three goals, seven assists) so far in the 2021 Stanley Cup Playoffs.