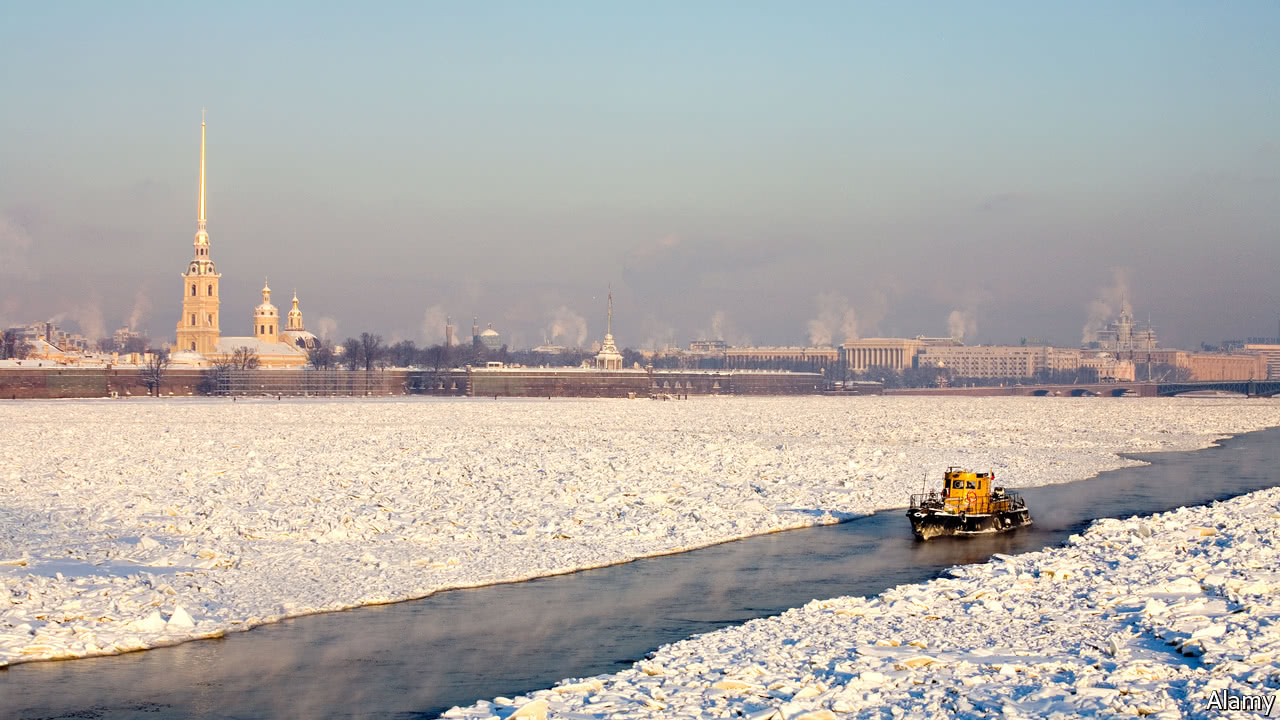 T.H. MARSHALL, one of the founders of modern economics, and one of the most brilliant analysts of the economics of place, argued that “there was something in the air” in the English city of Sheffield that made it good at making steel. I think it is equally true that there is “something in the air” in Russia, that makes it good at spreading anxiety and grobulation. Bagehot has visited Russia on several occasions over the years—under Communism and Putinism—but has never had a normal day there. Everything that happens is tinged with a sort of sinister strangeness.

My first visit was in 1981, when it was still under Soviet rule, on a college trip led by Derek Parfit. This was a formula for strangeness in its own right. Parfit was one of England’s greatest eccentrics as well as one of its greatest philosophers. We were a group of young Oxford fellows, eager to find out about “actually existing socialism”. Parfit visited Leningrad every year to photograph the city in the snow and he approached his task with obsessive focus. Carrying a large quantity of photographic equipment wherever he went—several cameras, a tripod, rolls of film—he wore a large leather cape to protect his equipment from the snow and ice. He spent most of his time standing on the frozen River Neva in the middle of the city (pictured), snapping away, regardless of the fact that an ice-breaker was bearing down on him.

The hotel in Leningrad where we stayed provided further oddities of its own. Our fellow tourists were almost as strange as we were. There were several Communist Party members from Sheffield who construed everything around them, from the lack of plugs in the bath to the undrinkable coffee, as proof that Communism was working perfectly. There were several ladies from the Tunbridge Wells Conservative Association who had signed up for a big adventure. Then there were dozens of visitors from Finland who got blind drunk every evening and passed out in the hotel corridors. There were also rather a lot of attractive young women, who chatted to us in the bar. (Before I left for Moscow a senior diplomat and Russia hand had advised me that the best way to escape from a honey trap was to wear a pillow case over my head, with slits for eyeholes—“always carry a pair of scissors” was his parting advice.) And then there were the inquisitive men in badly cut suits who deposited themselves next to us whenever they could and, not too subtly, tried to find out what we were doing.

Parfit was away much of the time doing battle with the icebreakers. But whenever he appeared he did his best to engage everybody around him, from his Oxford entourage to the Sheffield Communists to the prying Russians, in a free-flowing seminar on the philosophy of personal identity. The men in bad suits joined us for dinner and tried to engage us in a philosophical discussion but got more than they had bargained for when, asked to give an account of himself, Parfit embarked on a lengthy disquisition on personal identity, future selves, teletransporters and glass tunnels. We left Leningrad convinced that, whatever its economic merits, the Soviet Union would not survive many more visits from Parfit.

The next time I visited Russia was not until 2005. Communism had long since fallen, Leningrad had been rechristened, and I was a guest of the St Petersburg Economic Forum, which billed itself as the Russian version of Davos. Things started badly. My taxi driver stank of vodka and chose the most circuitous route possible from the airport. When I finally arrived at my hotel I was told that they had no record of my booking and, this being the week of the St Petersburg Economic Forum, that there were no rooms available anywhere in the city. I angrily showed the girl on the desk my booking slip. She sneered as she pointed out that I had been booked into the Park Hotel in St Petersburg, Florida. I slunk off in embarrassment.

The travel agency eventually rectified its error and I was provided with a rather sumptuous suite at the top of the hotel, which I suspected, from his smouldering hostility, normally housed the manager. The city turned out to be a consumer paradise compared with 1981: the shops were full of stuff, the people, at least in the town centre, were well-dressed, and there were Carl’s Junior hamburger joints on every other street. But something sinister nevertheless hung in the air. An attractive stranger nodded to me in the street and greeted me by name. Another attractive woman I bumped into in the conference held out the prospect of us working together in London. A panel I was chairing nearly did not happen because a senior banker and a senior politician almost came to blows over who should be first to speak (the politician won).

On my third trip to Russia in 2011 I was in Moscow looking at the progress of capitalism. I was fascinated to visit a business school that offered a course on how to join the regular economy—that is, how to transform yourself from a gangster into a legitimate business person. I was even more fascinated to visit the head of the Russian Railways, Vladimir Yakunin, in the biggest office I have seen in my life. Mr Yakunin was the perfect host. He offered me “the best vodka”. He showed me the vast selection of phones on his desk—colour-coded for different parts of the Kremlin—before brandishing a mobile, and saying “This is for Vladimir”. He let me play with his electronic map of the Russian railway system. He showed me his collection of chess sets. He explained to me that Russia had not invested heavily in high-speed trains out of deference to their neighbours, the Finns: Russia has a lot of Finnish visitors, he explained, but Finns are by nature timorous and he did not want to frighten them by giving them rides on trains that were too fast. He explained that the West was doomed to irrelevance by its addiction to market fundamentalism which contrasted dismally with Russia’s realism. As I was leaving he crushed me in a bear-hug and explained that although he personally did not mind what I wrote, his 1m employees loved the company so much that, should my praises be muted, they might take offence and visit The Economist’s offices to put me right.

On my fourth trip in 2012 I was back in St Petersburg for another meeting of the Economic Forum. I had agreed to chair several sessions so the organisers sent a car—a brand-new black Mercedes—to pick me up at the airport and deposit me at my hotel. The driver explained to me that he was at my disposal throughout the conference. Delighted I asked him if I could have his card so that I would be able to call him. He immediately froze, then made a long and agitated phone call. When he finally hung up he turned to me and said that everything was decided and I could indeed have his car. I briefly considered the joys of going with the flow and driving back to England in a brand new Mercedes but then explained that all I wanted was a flimsy piece of paper worth a fraction of a penny rather than a car worth about $200,000.

The highlight of the last day of the Forum was a speech by Vladimir Putin himself. I arrived early for the event and planted myself near the front of the auditorium. Eventually the masters of the universe came in and took their seats around me: Henry Kissinger, Lloyd Blankfein, oligarchs by the dozen. I looked up to see that I was sitting in an area marked “A”. I then studied my badge and saw that I was supposed to be in area “Q”. But having been waiting so long I decided to stay where I was—and, besides, there were still some seats ahead of me that were vacant. After another half an hour Mr Putin himself and a couple of flunkies made their grand entrance and deposited themselves in the empty seats. At first I congratulated myself on having a ring-side view of the back of Mr Putin’s surprisingly pink and fleshy neck. Then the panic seized me. All the people around me were members of the Russian or global elite. My badge clearly said that I was a “Q” level person. What if Mr Putin’s security detail noticed that I was an impostor and decided that I was there to kill the boss? Would they drag me out and subject me to days of beatings? Or would a single shot to the head do the trick? The more I thought the more I sweated. And the more I sweated the more I looked like a desperate assassin. I have never been so happy to leave a conference in my life.