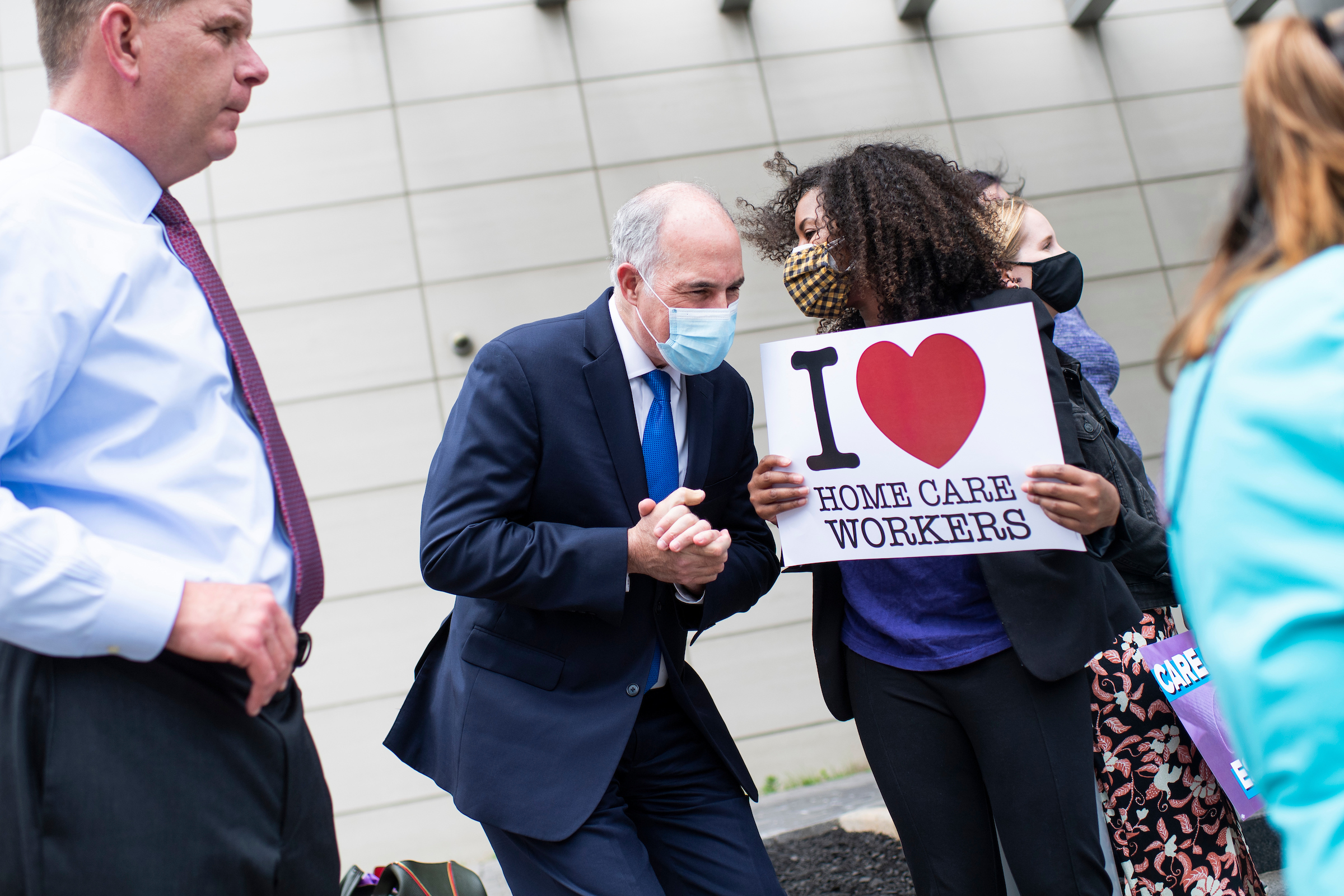 Advocates are concerned that a proposed boost to Medicaid and home health care for the elderly and disabled in Democrats’ $3.5 trillion budget bill will be pared back so much that it wouldn’t deliver on its promise to increase jobs and wages.

The topline funding number for home- and community-based services has wavered between $150 billion over 10 years and President Joe Biden’s initial request of $400 billion over eight years. The House bill currently would set the 10-year spending level at $190 billion, lower than what advocates view as sufficient.

But congressional leadership is expected to trim the $3.5 trillion bill to around $2 trillion over a decade in an effort to please fiscally moderate Democrats like Sens. Joe Manchin III of West Virginia and Kyrsten Sinema of Arizona.

The need for home care is only expected to grow, as around 10,000 seniors reach retirement age every day. Advocates point to long-term savings as a reason to fully fund an expansion since home care is traditionally less expensive than institutional care.

“We have seen huge losses of life in congregate settings alone, and so we need to provide some type of outlet or valve to that issue, and we’re going to be seeing even more individuals with disabilities in the future,” said Mia Ives-Rublee, director of the Disability Justice Initiative at the liberal think tank Center for American Progress.

Lawmakers are aiming to eliminate the 800,000-plus waitlist for home and community care under Medicaid by increasing federal matching rates for improvements to staffing and pay, expanded eligibility and additional services. Right now, states are required to cover some intermittent home health care but are not required to cover things like daily personal care or certain types of therapy.

Advocates estimate that at least $250 billion over a decade is needed to adequately fund a broad expansion and convince states to come on board. Congressional allies like Pennsylvania Democrat Bob Casey, chairman of the Senate Special Aging Committee, and Rep. Debbie Dingell, D-Mich., are working to secure at least that amount in the final package, which lawmakers hope to pass under a simple Senate majority through the rules of budget reconciliation.

In an interview Monday, Dingell said Biden assured her last week during his visit to Capitol Hill that funding was still in the package, but the amount remains unclear. She declined to say whether she thinks $190 billion is sufficient but expressed opposition to further reducing the number.

“This is a priority,” she told CQ Roll Call. “I mean, it is the most popular thing in all of this bill, that people want something to happen.”

Democrats are considering reducing the duration of a number of programs in the package as a way to bring down the cost. But Casey expressed hesitation about that idea, citing the need for long-term stability to convince states to make the effort.

“The United States is in the midst of a caregiving crisis and we have a once-in-a-generation opportunity to solve it,” he said in a statement.

A shorter authorization also would put the program at risk of expiring. Congress frequently passes short-term extensions of expiring programs at the last minute, and advocates are constantly working to make sure lawmakers continue to renew funding.

While home health aides count some major groups, such as unions, in their corner, they lack the star power of some lobbying organizations backing other industry players like doctors, hospitals or insurance companies.

“The political coalition behind it may not be as strong as for some of the other priorities,” said Jonathan Oberlander, chair of social medicine at the University of North Carolina-Chapel Hill.

Lower funding jeopardizes the impact the money will have on the program, including what advocates say is the most important factor: raising wages and increasing the workforce. Without better pay and benefits, states will likely struggle to recruit more aides to care for more patients.

“It means we’re likely not going to open up new jobs, because if we don’t at least increase wages, then we’re not going to have the supply of workers we need for those jobs,” Ives-Rublee said. “So that means we can’t do much in terms of getting people off waitlists.”

An analysis from the Urban Institute estimated that increasing the federal match rate by 10 percentage points could increase wages by an average of $5,000 per year and create an additional 147,000 jobs. Home health aides currently earn an average of $12 per hour, or $25,000 per year.

“We want to make sure that we do it in such a way that workers have a real shot of economic security,” she said of expanding the program.

Advocacy groups are keeping up pressure amid whispers of further funding reductions.

More than a dozen organizations, including the Service Employees International Union and the National Domestic Workers Alliance, formed the Care Can’t Wait Coalition in 2020 to push the message. The coalition held a 24-hour vigil last week at the Capitol that featured personal stories of affected workers, family caregivers and patients.

The event follows a rally last month on Capitol Hill that featured Speaker Nancy Pelosi, Senate Majority Leader Charles E. Schumer and a number of other lawmakers promising to get the expansion passed.