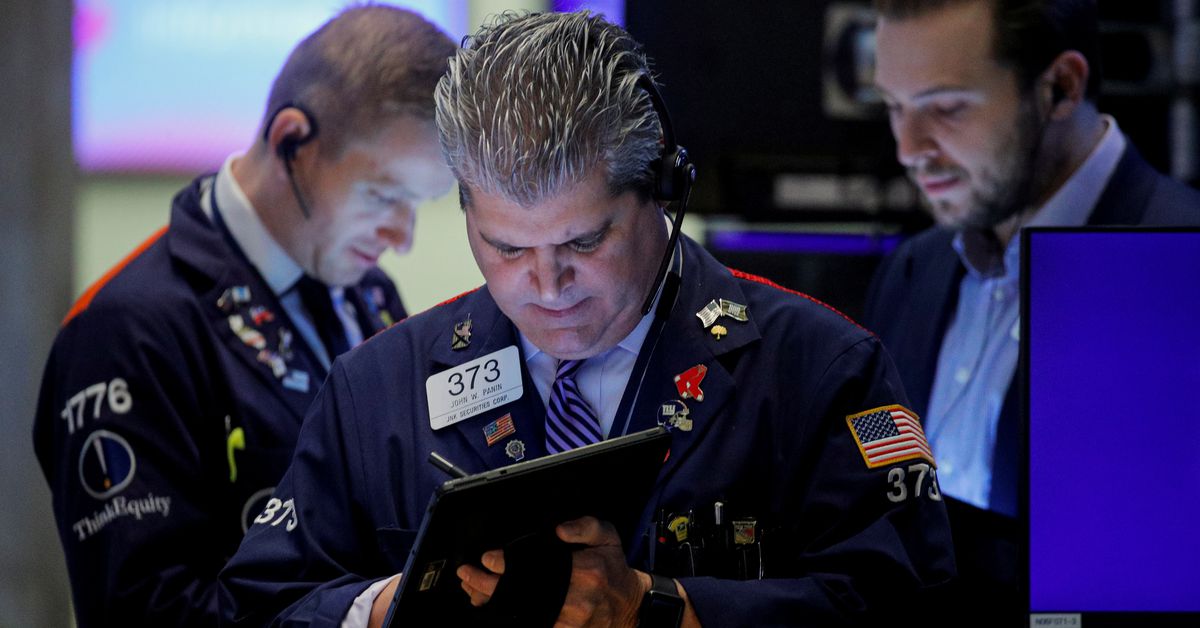 NEW YORK, Oct 27 (Reuters) – The Nasdaq ended little changed on Wednesday, boosted by gains in Microsoft and Google parent Alphabet on the heels of their quarterly results, but a drop in oil prices and a pullback in Treasury yields weighed on cyclical sectors and pulled the S&P 500 lower.

Microsoft Corp (MSFT.O) gained 4.21% to close at a record high after forecasting a strong end to the calendar year, fueled in part by its booming cloud business. Alphabet Inc (GOOGL.O) jumped 4.96% after reporting a record quarterly profit on a surge in ad sales. read more

The gains in the two stocks accounted for nearly 90 points to the upside in the tech-heavy Nasdaq while Microsoft was the biggest boost to the Dow Industrials, S&P 500 and Nasdaq.

A pullback in longer-term U.S. Treasury bond yields and a flattening of the yield curve also helped support growth names such as those in consumer discretionary (.SPLRCD) and communications services (.SPLRCL), which were the only advancing S&P sectors on the day.

The benchmark 10-year U.S. Treasury yield declined for a fourth straight day, dropping more than 6 basis points to put it on track for its biggest one-day decline since Aug. 13.

“The growthy names will get a boost not just from some of the earnings stuff but because interest rates are lower,” said Megan Horneman, director of portfolio strategy at Verdence Capital Advisors in Hunt Valley, Maryland.

“Interest rates are temporarily lower because of the fact that there is some uncertainty from the tax perspective and what that might do. We do know the Fed is going to taper, that has pretty much been priced in but now you have a lot of talk about what the future of the Federal Reserve may look like.”

A solid start to earnings season has helped push the S&P 500 (.SPX) and the Dow (.DJI) to all-time highs this week, as investor concerns over the ability of companies to navigate supply-chain bottlenecks, labor shortages and rising price pressures have been allayed for now. The Nasdaq sits less than 1% away from Sept. 7 closing record.

“While we are not out of the woods by any means, companies are adjusting quicker than we had anticipated,” said Horneman.

Profits for S&P 500 companies are expected to grow 37.6% year-on-year in the third quarter. Out of the 192 companies that have reported earnings, 82.8% have topped analyst expectations, according to Refinitiv IBES data.

The move into the growth names like technology stocks was also triggered after some U.S. Senate Democrats proposed taxing billionaires’ unrealized gains from their assets, while concerns around the timing of rate hikes resurfaced ahead of the Federal Reserve’s policy meeting next week. read more

Declining issues outnumbered advancing ones on the NYSE by a 2.43-to-1 ratio; on Nasdaq, a 2.29-to-1 ratio favored decliners.

Volume on U.S. exchanges was 11.74 billion shares, compared with the 10.43 billion average for the full session over the last 20 trading days.