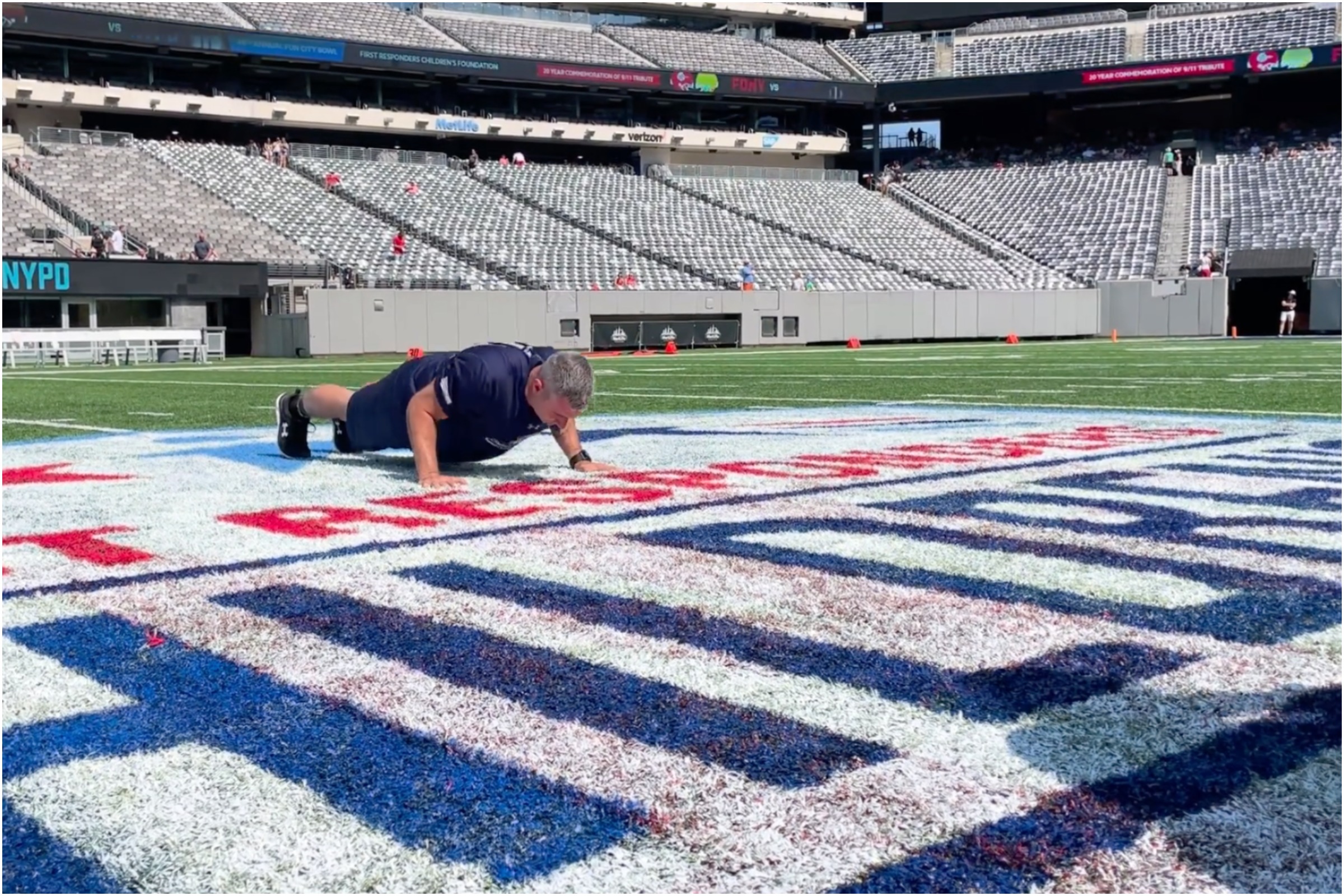 A Wisconsin man has gone to extreme, near-impossible lengths to inspire his kids—while raising money for an important cause.

As of Sunday, Winneconne’s Nate Carroll completed his 1,500,231st push-up within the span of twelve months, says The Wisconsin State Journal.

Averaging 4,100 push-ups per day—and occasionally reaching a whopping 7,000 in one day—Carroll is using the challenge to fundraise for the Tunnels to Towers Foundation, an organization that offers housing and mortgage assistance to the families of officers and firefighters who are killed in the line of duty.

Additionally, Carroll hopes to teach his own children an important lesson in achieving one’s goals. Carroll told Fox News that he hoped to “demonstrate to my kids what goals that seem impossible look like when they are broken down into daily manageable chunks.”

“I understood if this challenge was going to be taken on, there had to be more depth to it besides just breaking a record,” he added. While his muscle tone certainly did increase over the course of the year, he explained, “What was most noticed was my awareness of how my body felt and responded to the stress of thousands of push-ups each day.”

More than physical, he told Fox News that the “most dramatic change was…mental strength and the understanding that the body is a phenomenal creation, and if properly cared for and conditioned, can endure significant physical stress and accomplish tremendous feats.”

To mark the momentous occasion, he completed the record-breaking push-ups during halftime of the 48th annual Fun City Bowl, a football game for New York City first responders.

Over the past year, Carroll, a social worker, has been completing the majority of his push-ups in between his daily responsibilities, turning everywhere from his living room to his office into a makeshift gym. “Trying to balance this amount of push-ups with being a father and working full time sometimes creates obstacles that you sometimes have to overcome,” he explained to The Wisconsin State Journal.

“I try to weave my push-ups into my daily activity. To set aside time to do 4,000 push-ups is impossible. You have to really make it a priority and be willing to commit to it and embrace the fact that you have to weave that into your day.”

To verify his enormous number of push-ups, Carroll has “documented” every single one in a “logbook.” Additionally, he’s uploaded videos of the majority to YouTube in time-lapse form and has witnesses that can attest to the accuracy of his claims.

Carroll’s record still requires approval from Guinness World Records, but should they accept it, Carroll will replace Paddy Doyle, a British athlete who set the record in 1989. In the meantime, Carroll is continuing to add to his tally before reaching his twelve-month deadline, this upcoming Sunday.

And, for anyone looking to chase a similarly difficult dream, Carroll has some inspirational words: “Set a goal, and get after it,” he told Fox News. “Make it who you are, not something you do. That way, when it gets hard and life throws obstacles in your way and offers you convenient excuses to stop or says it’s too difficult, you find a way to endure and persevere and keep after it. Winning those mini-battles each day builds strength and shapes one’s perspective of what is possible.”