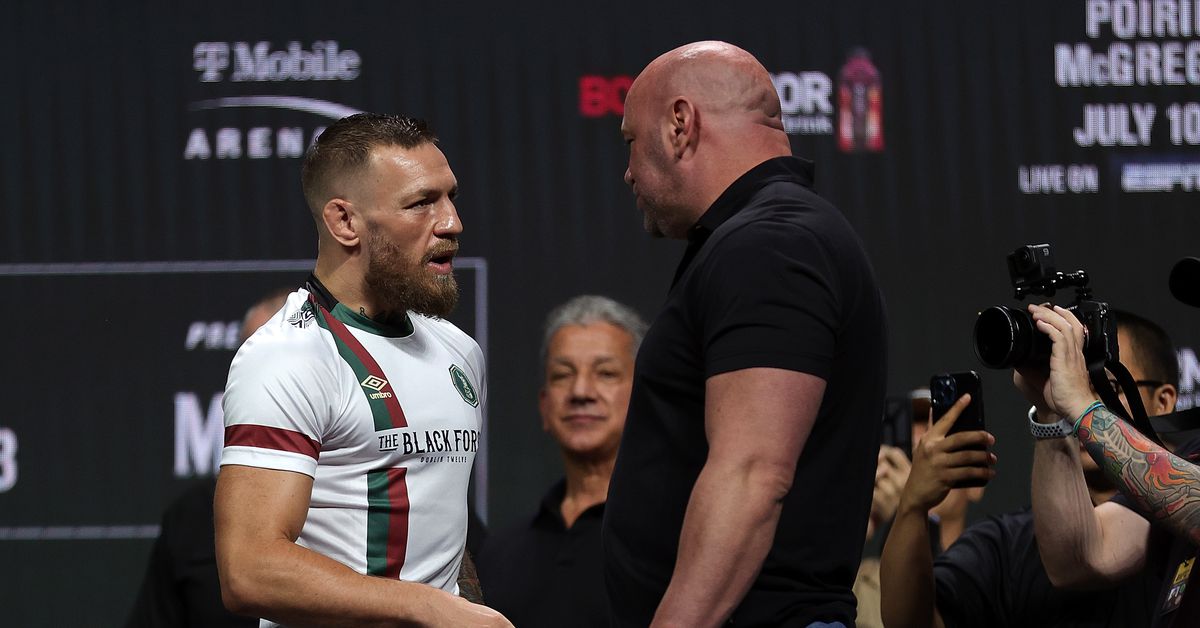 McGregor suffered a grisly loss via doctor’s stoppage to Poirier after breaking his tibia and fibula in the closing seconds of the first round of UFC 264’s main event. In the days and weeks since McGregor’s loss, the former two-division UFC champion has claimed that he entered the Poirier trilogy fight with stress fractures in his leg and that White and UFC officials were aware of his injury woes.

In a recent interview with Fox News, White said that McGregor’s issues were indeed known before his loss at UFC 264 and said that McGregor requested permission from Nevada officials to tape up his ankles for the Poirier fight, but ultimately decided against it.

“He’s had ankle issues for the last couple of years, and he had asked if he could tape his ankles coming into this fight and he got clearance to do it from the Nevada state athletic commission,” White told Fox News, “and then he opted not to tape them. I don’t know why.

“But yeah, he has chronic arthritis in his ankles.”

White’s statements echo the claims McGregor posted on his Instagram following the Irishman’s successful surgery to repair his broken tibia and fibula.

“I was injured going into the fight,” McGregor said. “People are asking me, ‘When was the leg broke? At what point did the leg break?’ Ask Dana White, ask the UFC, ask Dr. Davidson, the head doctor of the UFC. They knew, I had stress fractures in my leg going into that cage. There was debate about pulling the thing out because I was sparring without shin pads and I would kick the knee a few times. So I had multiple stress fractures in the shin bone above the ankle, and then I have trouble with the ankle anyway throughout the years of f*cking fighting all the time. And I also was wrapping me ankle every training session. I even done a lot of training sessions when the ankle was sore, I still wouldn’t stop training.”

In contrast to those claims, Nevada Athletic Commission (NAC) executive director Bob Bennett recently told the Las Vegas Review-Journal that the NAC had no knowledge of any preexisting injuries for McGregor heading into UFC 264. In accordance with commission guidelines, McGregor also would’ve been required to fill out a pre-fight questionnaire confirming that he was in good health to fight and wasn’t suffering from serious injuries.

“If we ever knowingly had information a fighter wasn’t fit to fight, we wouldn’t let them compete,” Bennett told the Las Vegas Review-Journal. “It would go to a doctor and a doctor would make that decision as the expert.”

Either way, McGregor is expected to be on crutches for six weeks post-surgery before beginning the lengthy process of rehabilitation for his UFC comeback.

White said that he isn’t certain how the future will play out for the UFC’s biggest superstar, but he expects McGregor to at least be out until mid-to-late 2022.

“It’s going to take him a year to recover from this one before he can come back, so I don’t know, we’ll see,” White said. “The fight game is a tough game and the kid’s cemented a massive legacy for himself and made a lot of money, so we’ll see how the rest of his career plays out.”