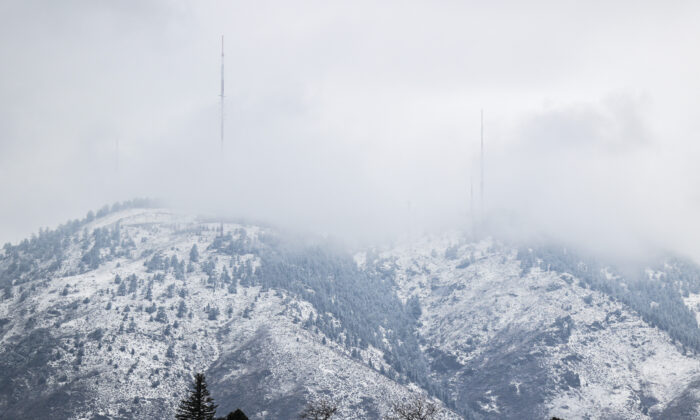 Snow coats the foothills before a winter storm in Golden, Colo., on March 12, 2021. (Michael Ciaglo/Getty Images)

A powerful spring snowstorm was expected over the next three days to blanket parts of the U.S. Rockies and central High Plains where forecasters warned of whiteout conditions, power outages, and avalanches.

The National Weather Service (NWS) issued blizzard warnings for parts of Wyoming and western Nebraska, where quickly accumulating snowfall of up to 2 feet and fierce winds reaching 65 miles per hour could cause dangerous conditions from Saturday through Monday.

The weather service told travelers who must be on the road to carry emergency supplies and flashlights. It also warned that strong winds and the heavy snow could cause extensive damage to trees and power lines.

“We’re preparing for a potentially historic winter storm to impact Southeast Wyoming,” Wyoming Gov. Mark Gordon said on Twitter. “The best option is to stay off the roads this weekend.”

To the south in Colorado, conditions were forecast to deteriorate throughout the day on Saturday. The I-25 urban corridor, where five million people live in cities such as Denver, was expected to get 2 feet of snow and 35 mph winds throughout the weekend.

The NWS warned travelers and skiers in higher elevations that avalanches could be easily triggered as snow totals could rapidly accumulate, while Colorado Gov. Jared Polis activated the state’s National Guard to respond to search and rescue requests over the weekend.