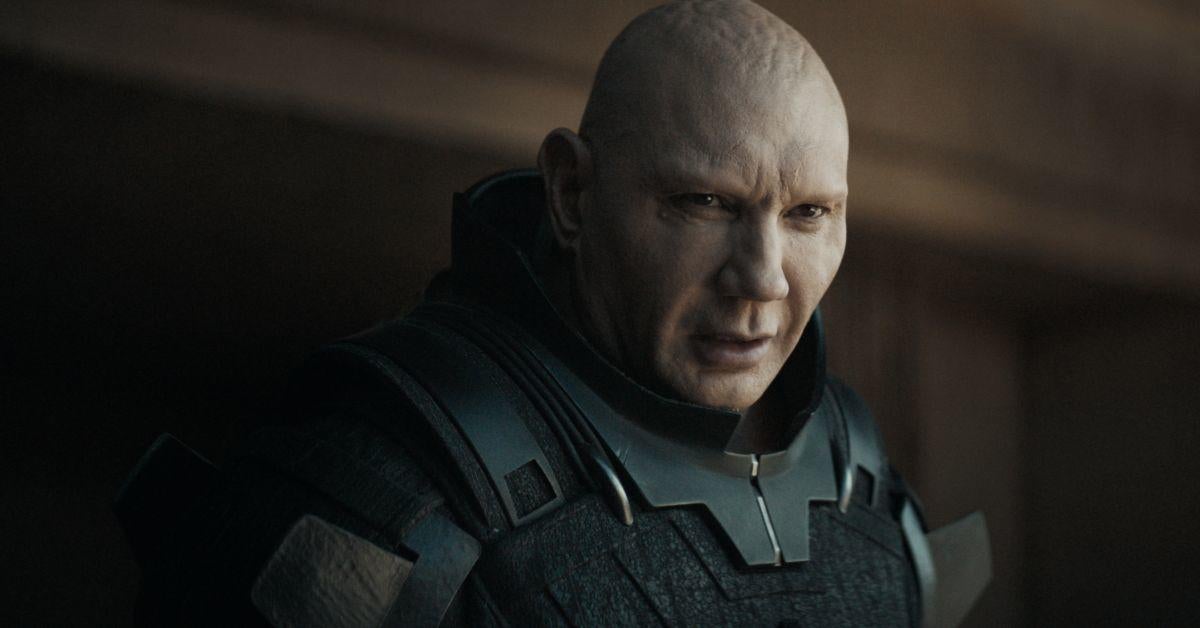 Four time World Heavyweight Champion Dave Bautista packed it all up and left that world behind after realizing that he wanted a little more out of his creative output. Though a handful of additional returns to the ring have happened in the past decade, Bautista is best known to many around the world for his acting chops and feature film appearances. Bautista had a few credits to his name prior to 2014’s Guardians of the Galaxy like The Scorpion King 3 and Riddick, but after becoming a breakout in the Marvel Cinematic Universe he’s moved on to even more unique and challenging projects, like the upcoming Dune.

With the upcoming Dune, Bautista takes on the part of the sadistic Glossu Rabban and collaborates once again with his Blade Runner 2049 director Denis Villeneuve. Speaking in a new interview, Bautista said that Villeneuve offering him the part in this movie was huge for him and made him feel so good that he realized leaving his wrestling career was worth it. “I left a career in professional wrestling to take a chance on myself because I fell in love with acting. It took me forever to get a job,” Bautista revealed to Entertainment Weekly. “So when someone like Denis calls me and says ‘I really want you to play this part,’ that validates the sacrifice and the chance I took on myself.”

Since taking on the part of Drax and really digging into his acting career Bautista has had some roles that would make any sensible person jealous. Following his first appearance as Drax, he became a Bond villain with 2015’s SPECTRE, later starring in Blade Runner 2049, and earlier this year appearing in Zack Snyder’s Army of the Dead (even turning down a role in James Gunn’s The Suicide Squad to do it).

“I was all up for it, and then I got Army of the Dead, which was not only a lead role for me, but also I really wanted to work with Zack Snyder. I’ve been wanting to work with him for years,” Bautista told Digital Spy earlier this year. “I had The Suicide Squad where I got to work with my boy again, even though it’s a smaller role, and then I had Army of the Dead on which I get to work with Zack, I get to build a relationship with Netflix, I get a lead role in a great film – and I get paid a lot more money. I had to call James, and I told him, ‘It breaks my heart, because as a friend, I want to be there with you, but professionally, this is the smart decision for me.’ He said, ‘I completely get it. I’m proud of you that you’re even in this position. I’m proud that I had something to do with you being in this position where you have to make these hard decisions.'”

Dune will debut in theaters and on HBO Max on October 22.