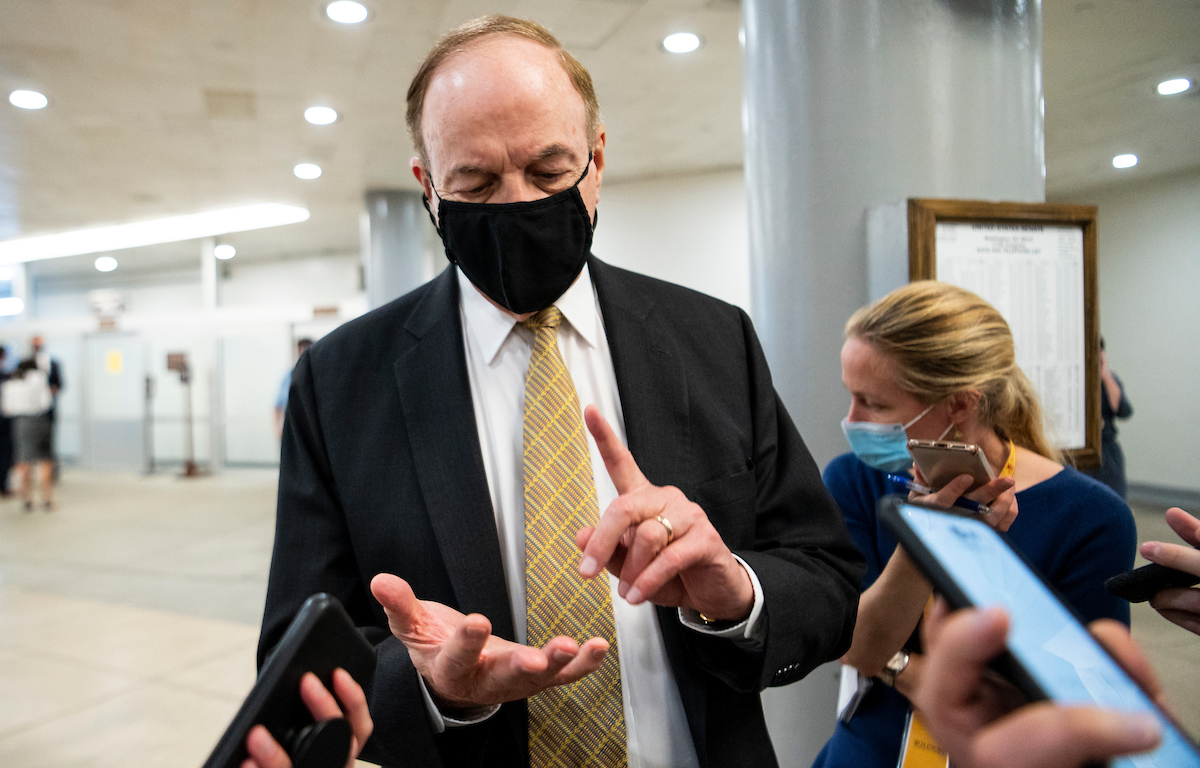 Democrats have a brief respite to try to raise the debt limit before the Treasury Department runs out of borrowing authority as early as December. But the path forward is littered with procedural questions and political obstacles.

Senate Republicans are insisting Democrats raise the debt ceiling without GOP help by using the filibuster-proof reconciliation process. Democrats have largely rejected that option, which Senate Majority Leader Charles E. Schumer says would be a “drawn-out, convoluted and risky” endeavor, though Speaker Nancy Pelosi on CNN’s “State of the Union” on Sunday acknowledged that reconciliation is “one path,” but not the preferred one.

And, according to budget experts, reconciliation procedures appear to require lawmakers to vote for a specific debt limit amount, at least during the initial phase. That’s a potential political problem for Democrats’ preferred approach of taking the debt ceiling off the table until after the 2022 midterms, which could require raising the limit by something like $2 trillion — topping $30 trillion for the first time.

Another option, bandied about before Schumer and Minority Leader Mitch McConnell earlier this month settled on a short-term patch raising the debt limit by $480 billion, was a “waiver” from the Senate’s filibuster rules. Sen. Joe Manchin III, D-W.Va., nixed that idea, but some say it could win over even the most ardent critics if the U.S. Treasury once again faces default.

“I think you’ll see an awful lot of Democrats being ready to say, ‘Not me, I’m not doing that again. We’re going to end the filibuster,’” President Joe Biden said during a CNN town hall Thursday night.

Alternatively, Democrats could try to convince 10 Senate Republicans to vote for another series of short-term increases if necessary. “Republicans just showed us they are capable of allowing a Democrat-only majority threshold vote to happen through regular order,” said a former Democratic aide who requested anonymity to speak candidly. “There’s no reason we can’t do that again.”

Republicans say that’s not an option. McConnell wrote to Biden on Oct. 8, “I will not provide such assistance again if your all-Democrat government drifts into another avoidable crisis.” Alabama Sen. Richard C. Shelby, one of 11 Republicans who voted to proceed to the short-term bill, said last week he wouldn’t do so again, “and I don’t think any of us would.”

Some conservatives criticized McConnell for relenting on the short-term patch. But a former GOP aide said that bill prolonged the debt limit as an issue for Democrats. The former aide, who spoke on condition of anonymity, believes McConnell’s objective has been to “make sure Democrats own the [debt limit] number” and slow down their legislative agenda.

Barring a GOP change of heart or a change in the filibuster rules, reconciliation appears to be the most obvious, yet tortuous, path — and one that could eat up valuable floor time.

Only in the 1993 example was there unified control of government, in Democratic President Bill Clinton’s first year with big majorities in both chambers. Democrats included a $530 billion debt limit increase, to $4.9 trillion, in a five-year, $433 billion deficit reduction package — of which more than half consisted of tax increases. Democrats were later routed in the 1994 midterm elections.

That experience isn’t lost on lawmakers who now have negligible margins for error in both chambers, versus 1993 when dozens of Democrats were given a pass to vote “no” and still lost their majorities. And this time the reconciliation package under discussion may be budget-neutral at best; if so, Democrats in swing districts won’t be able to at least say their votes to raise taxes would reduce deficits.

Against such a backdrop, rolling in a large debt limit increase might be considered politically toxic. On that score, the calendar might work in Democrats’ favor since the sweeping social spending and climate package could get a vote before Congress recesses the week of Nov. 8, though that might be ambitious.

Regardless of timing, procedural questions might yet prevent Democrats from tacking a debt limit increase onto their reconciliation bill.

Congress has never used section 304 of the 1974 budget law, which lets lawmakers revise a prior budget resolution, to add a new set of reconciliation instructions. No one knows whether the Senate parliamentarian would allow them to add a new reconciliation measure to an existing one that was drafted under an older resolution.

What’s clear is lawmakers could pass new reconciliation bills under a revised budget, including one to “specify the amounts by which the statutory limit on the public debt is to be changed,” as the 1974 law states.

But that wording poses another political challenge in that lawmakers would likely be forced to vote on a dollar amount, rather than the “suspensions” of debt ceilings they voted on from 2013 up until the latest short-term patch.

It’s possible there are creative ways to write a reconciliation bill to avoid putting a dollar figure directly in the text. Senate Parliamentarian Elizabeth MacDonough hasn’t opined on whether a reconciliation bill could be used to suspend the debt limit, according to people with knowledge of the discussions.

One school of thought says that by suspending the debt ceiling until a date certain, lawmakers would necessarily be changing the amount, since the limit would reset to a higher number when the suspension ends. Another, more indirect method could be to write a bill raising the debt limit by the same amount of debt accrued between two prior dates, according to people familiar with the talks.

But none of those options alleviate the initial problem, which is that the revised budget resolution itself must specify an amount, as MacDonough has told lawmakers. That means the vote to adopt the budget revision could be spun as a vote to raise the debt ceiling, no matter what happens with the actual legislation to implement the change.

Both chambers would first need to adopt a revised fiscal 2022 budget with instructions to raise the debt limit. That would take a simple majority in the Senate. The instructions would go to the Senate Finance and House Ways and Means committees, which would write a brief reconciliation bill. Both chambers would need to pass the reconciliation measure. That would also take a simple majority.

Based on what MacDonough has said, Senate Budget Chairman Bernie Sanders, I-Vt., would have to mark up the revised budget in committee, rather than employ a special “auto discharge” procedure Democrats were able to use for the initial fiscal 2022 budget since the panel didn’t act before an April 1 deadline.

And since the committee is evenly split, at least one Republican on the panel would have to cross over to vote to report the budget to the floor. Otherwise, Democrats would need to use the discharge procedure in the Senate organizing resolution adopted at the beginning of the year to send the budget to the floor. Debate on a discharge motion would be limited to four hours, but it adds another step.

Debate on the revised budget resolution then would be limited to 15 hours in the Senate. But at the end of 15 hours comes another “vote-a-rama,” which in theory could chew up many more hours and subject Democrats to politically perilous votes.

Budget experts say fewer amendments than usual would be allowed since they’d only be germane if they changed the amount of the debt limit increase. Nevertheless, some Democrats expect Republicans would force multiple votes on unrelated matters to produce votes that could dog Democrats in next year’s campaigns.

Even amendments that are germane can be politically potent. For example, Republicans could offer proposals to lower the debt ceiling increase by suggesting policy changes that would reduce spending, such as preventing undocumented immigrants from crossing the border.

Peter Cohn and Jennifer Shutt contributed to this report.