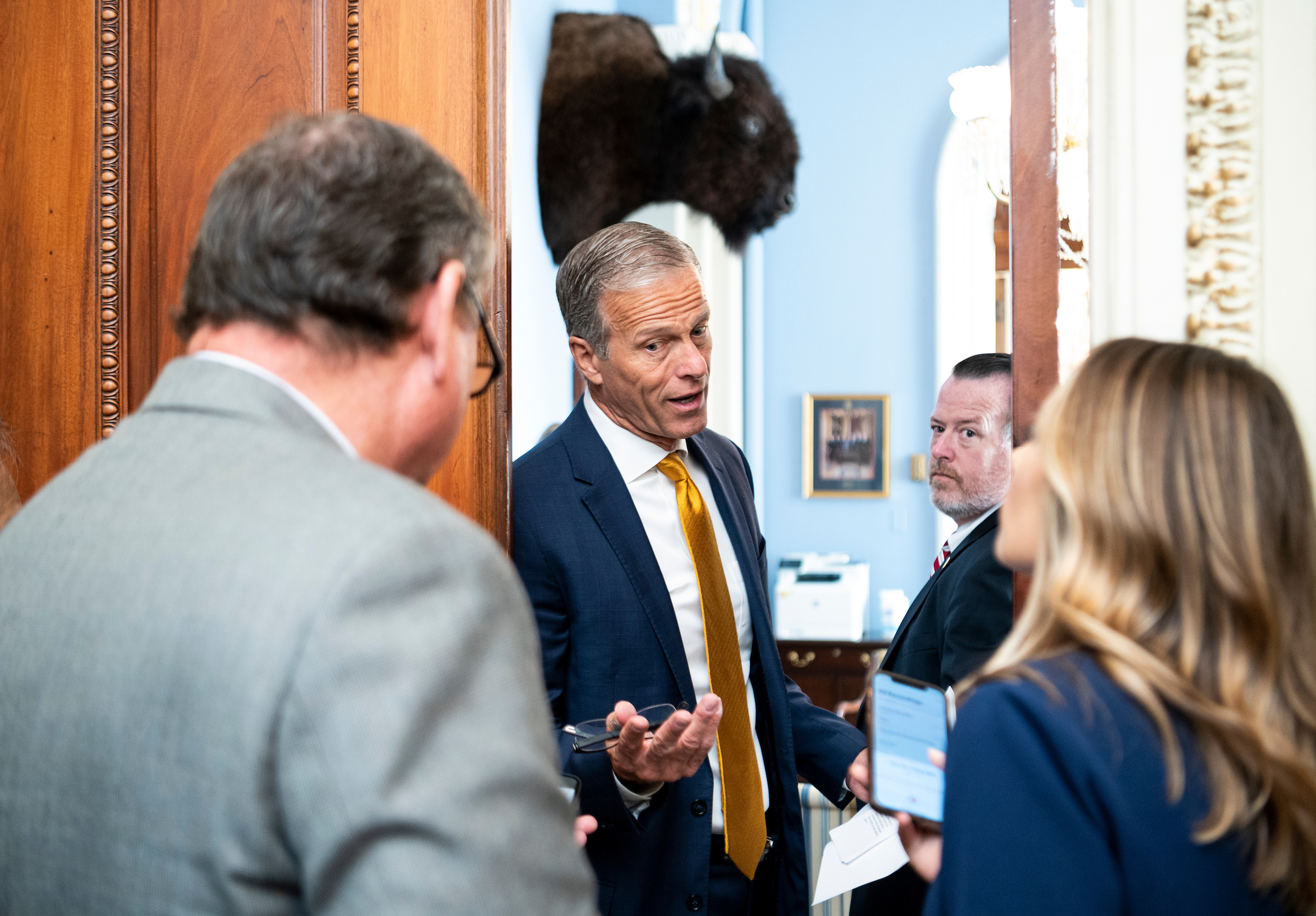 The government will likely run out of borrowing authority sometime in October or November unless Congress takes action to raise or suspend the debt limit, the Congressional Budget Office warned Wednesday.

The new forecast sets the stage for a fall showdown over the debt limit that already promised to become a partisan firefight. Top Republicans, led by Senate Minority Leader Mitch McConnell of Kentucky, vowed not to cooperate on debt limit legislation, saying Democrats would have to act on their own to avoid a default on U.S. obligations later this year.

Congress suspended the debt limit two years ago, but that measure will expire July 31. The debt limit will reset on Aug. 1 to the total amount of debt outstanding on that day, which the CBO estimated will be about $28.5 trillion.

There would be no immediate default on that day because Treasury is expected to have an unusually large $450 billion cash stockpile at that point and it can use so-called extraordinary measures — accounting tools to create more borrowing room — to extend its borrowing capacity.

But that headroom will become exhausted sometime in the first quarter of the coming fiscal year, which begins Oct. 1, the CBO said Wednesday. The drop-dead date would occur “most likely in October or November,” it said.

“After that point, the debt limit would cause delays of payments for government activities, a default on the government’s debt obligations, or both,” the agency said in its report.

But the CBO also cautioned that the Treasury could run out of cash either earlier or later than it projects, depending on the timing and size of revenue collection and spending in the coming months.

Treasury’s cash balance was $850 billion on June 30 and had dropped to $700 billion as of Monday. Under the agency’s prior forecast, that means it would burn through another $250 billion over the last 10 days of this month.

The CBO said that in the last quarter of this fiscal year, ending in September, the total deficit will be $765 billion, an undetermined portion of which would be covered by drawing down cash. Quarterly corporate income taxes are due in mid-September, which could provide another temporary buffer.

But the Bipartisan Policy Center has said this year’s forecasting is particularly tricky because of the difficulty of gauging the ongoing economic effects of the COVID-19 pandemic.

No matter what the precise deadline for action is, the battle has already begun.

Republicans said they were in no mood to cooperate on the debt limit while Democrats push a $3.5 trillion spending initiative through budget reconciliation.

“I don’t think there’s a single Republican senator who views increasing the debt limit so that Democrats can expand government and spend massive amounts of money as something that they, in the end, would want to support,” the Senate’s No. 2 Republican leader, South Dakota Sen. John Thune, told reporters Wednesday.

Likewise, the top Republican on the House Ways and Means Committee, Texas Rep. Kevin Brady, said earlier that Democrats will need to be “taking full responsibility for addressing the debt ceiling on their own.”

In a floor speech Wednesday, Senate Majority Leader Charles E. Schumer, D-N.Y., said Republicans “should not be playing political games with the full faith and credit of the United States.” He pointed out that both parties supported suspending the debt ceiling on three occasions under former President Donald Trump.

Democrats, as the majority party, must decide whether to go it alone — and face partisan attacks — or endure some contentious negotiations with Republicans seeking leverage over spending decisions.

The 2018 and 2019 debt ceiling suspensions were each attached to legislation increasing discretionary spending caps, with rough “parity” between the defense increases Republicans sought and nondefense boosts Democrats pushed. Right now, the two parties are at an impasse over appropriations bills because the White House and Democratic leaders are seeking to push through a skinny, less-than-2 percent hike in defense accounts with a nearly 17 percent increase for domestic and foreign aid programs.

Raising or suspending the debt limit on their own would require Democrats to include the measure in a reconciliation package, which skirts the risk of a GOP filibuster. But any such party-line vote on the debt limit would give Republicans a political cudgel to attack Democrats as the party of excessive spending and higher debt.

That political risk explains why Democrats have been leaning toward avoiding the use of reconciliation for any debt limit action. “I would hope that on a bipartisan basis we can find a way forward without creating a crisis of worry about the United States of America welching on its debts,” House Majority Leader Steny H. Hoyer, D-Md., told reporters Tuesday.

But Republicans made clear they intend to exact a political price for any bipartisan deal on the debt limit.

For instance, South Carolina Sen. Lindsey Graham, the top Republican on the Senate Budget Committee, said he’d want to tie any debt limit action to the creation of a commission dedicated to fixing the projected insolvency of government trust funds like the ones that finance Social Security and Medicare. That’s based on a bill from Sen. Mitt Romney, R-Utah.

“I think it’s time to have some structural reforms in place, because the debt is exploding,” Graham said.

But Democrats said they have no intention of cutting any deal on spending to win GOP support. “Nobody is going to hold the American economy hostage,” said Senate Finance Chairman Ron Wyden, D-Ore. “Period. Full stop.”

Budget experts have said using reconciliation would likely require resetting the debt limit to a specific dollar amount. The 1974 budget law that created the reconciliation process says the procedure can be used to “specify the amounts by which the statutory limit on the public debt is to be changed and direct the committee having jurisdiction to recommend such change.”

But Hoyer said Tuesday his preference is to suspend the debt limit through a certain date instead of increasing the borrowing cap to a certain dollar amount. And it’s easy to see why suspending the debt limit, which doesn’t appear to be allowed under budget reconciliation rules, is the politically preferable route.

If the debt limit is reset to roughly $28.5 trillion, as the CBO projects, that level would amount to a debt increase of $6.5 trillion since Congress last voted to suspend the debt ceiling in 2019.

A bill to raise the debt limit by that amount back then would have likely been laughed out of the room, and lawmakers would have had to come back again during the pandemic to ratchet up the debt ceiling, perhaps multiple times.

From the beginning of March 2020, just before lockdowns began, through Trump’s last day in office in January 2021, debt subject to limit — which includes securities held by government trust funds like Social Security and Medicare — rose by $4.3 trillion. That doesn’t include additional spending on pandemic relief and other matters that was set in motion by earlier votes but hadn’t yet flowed out of the Treasury.

Recognizing that the need to raise the borrowing cap stems from past fiscal decision-making, at least one Republican said Wednesday he was open to supporting a debt limit increase.

“My personal opinion is that once you have acquired the debt, you are responsible for the debt and you need to address the debt,” said Sen. Mike Rounds of South Dakota.