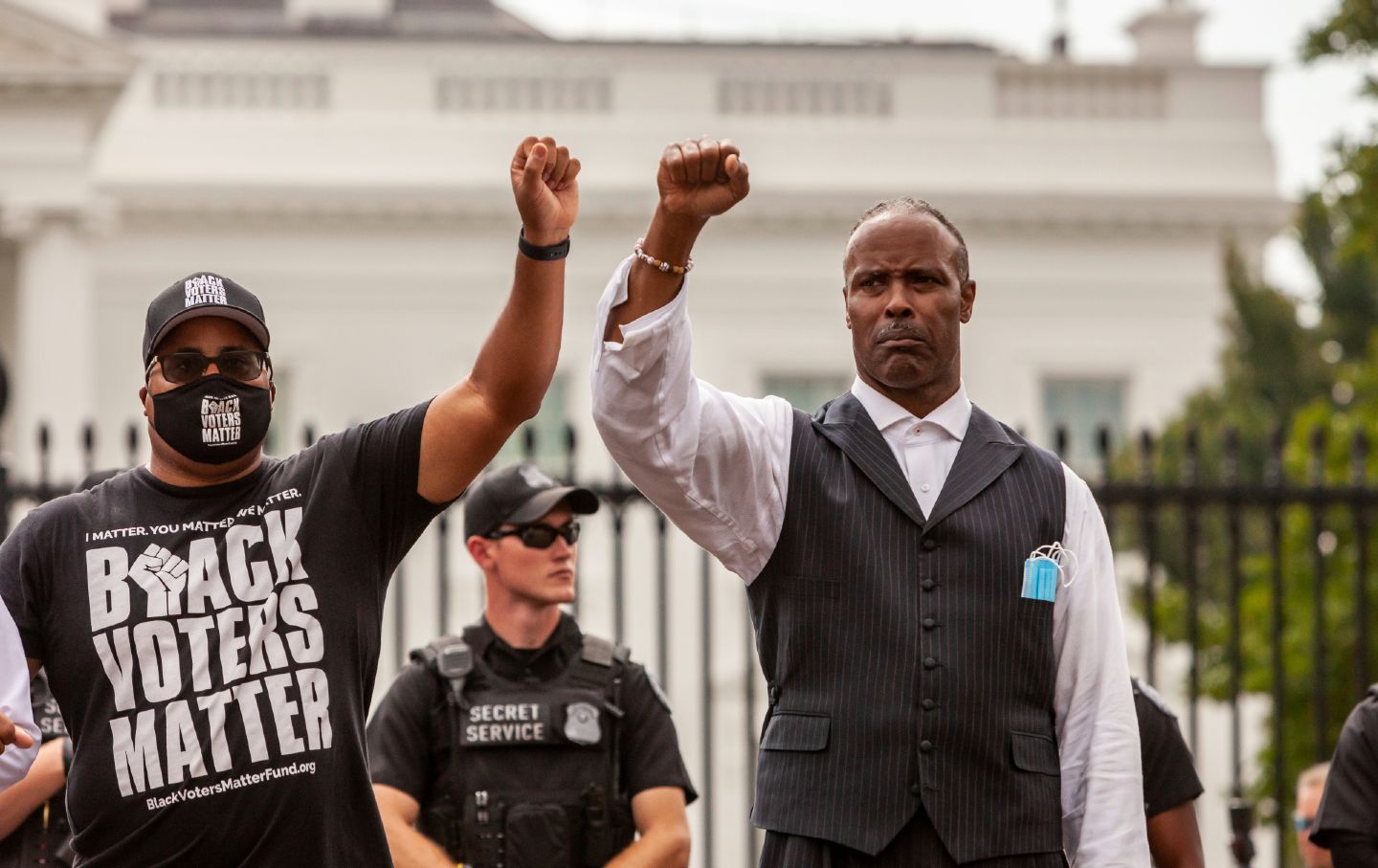 We have come to a familiar crossroads of American politics. Democrats, who cannot win national office without the overwhelming support of Black people, are facing rejection from perpetually aggrieved, poorly educated whites. These whites are poised to vote to defeat Democrats in upcoming elections. In response, a chorus of powerful Democrats has risen up inside the Beltway to tell Democrats that abandoning Black people—the very people who put them in power in the first place—and making performative efforts to win the support of racists, is the only way to stay in power.

And Democrats are, predictably, listening. Black people, our concerns, and our agenda, are always the first ones to be thrown overboard, even when we’re rowing the damn boat.

The issue has been all over the pages of The New York Times in recent days. Ezra Klein wrote an interesting profile of David Shor, a data analyst who became famous by warning Democrats that taking Black people seriously after George Floyd’s murder would lead to whites’ leaving the Democratic Party. He was right, of course, just like I was right in predicting that the initial white sympathy toward those protests would be fleeting and lead to no real change. You don’t need a crystal ball or abacus to predict macro-level white behavior in this country; you just need a competent understanding of what a majority of white people are willing to do to maintain their status.

It turns out that Shor was able to parlay his helpful, data-driven analysis of what white people are really like into “Democratic data guru” status within the Biden administration. I do not personally know a single Black person who was surprised that the Floyd protests and urgent demands for justice were met by a whitelash once a majority of whites (and a not insignificant number of Latinos) remembered that keeping a violent police force with its foot on the neck of Black folks was what they really wanted. Again, I even wrote about it in real time. But Shor said all that stuff while white, so he’s the guru with the ear of the president now.

There have been Democrats making Shor’s argument every election cycle since World War II. Black people are always told that progress toward a fair and just country must be deferred for fear of losing white voters. Shor’s twist on the classic tale is to include non-college-educated Blacks and Latinos as among those potentially willing to bolt the Democratic Party should it actually produce policies that help Black and Latino voters. But even that data point is hardly new or revelatory.

I disagree with Shor not on the problems but on his proposed solutions. Shor, according to Klein, suggests doing what Democrats have traditionally done: figure out what the racists want and give it to them, while simultaneously pretending the party will never take real steps to challenge white supremacy.

Klein puts it less bluntly than I just did. He writes:

Atop this analysis, Shor has built an increasingly influential theory of what the Democrats must do to avoid congressional calamity. The chain of logic is this: Democrats are on the edge of an electoral abyss. To avoid it, they need to win states that lean Republican. To do that, they need to internalize that they are not like and do not understand the voters they need to win over. Swing voters in these states are not liberals, are not woke and do not see the world in the way that the people who staff and donate to Democratic campaigns do.

Right. If “swing” voters like racism, it’s very important that Democrats internalize that racism as one valid option among many. Far from trying to, I don’t know, defeat the racists or put in place durable guardrails to blunt their power and effectiveness, Shor’s advice is that the Democrats need to give these voters as much of what they want as possible.

Shor’s prescription is nothing new. As Jamelle Bouie wrote in a follow-up column to Klein’s piece, the move of crapping all over the Black people you need to win elections so that white racists feel more comfortable with you was tried and perfected by Bill Clinton. He called it “triangulation.” And it worked. Clinton was good at two things: kissing Black babies and sending Black children to jail.

But as Bouie points out, it’s unclear if Shor or others clamoring for a whites-first approach (and it is a whites-first approach, because for all the signaling about non-college-educated people of color, Shor quickly acknowledges that non-college-educated whites are the biggest cohort of voters in swing states) to Democratic politics have really thought through what that would look like in 2021.

Clinton was able to placate racists through the use of dog whistles and terrible legislation. But Trump has rendered the dog whistle obsolete, while progressives now have the standing and profile to block or blunt many terrible policies (even as they lack the strength actually to pass good policies). Clinton was able to pick a fight with Jesse Jackson and show the racists that he was willing to put a Black leader in his place. But in 2021, I don’t know whom Biden is supposed to pick a fight with and win. William Barber? Ayanna Pressley? His own vice president, Kamala Harris? You can almost feel how desperate white centrist Democrats are to turn Ilhan Omar into a “Sister Souljah moment,” but whenever they try it, too many women of color have her back. It’s not as easy to isolate and denigrate Black leaders for white applause as it used to be.

Perhaps more troubling for the Shor wing of the Democratic Party is the fact that Black people can see what white Democrats are trying to get away with and are not impressed. While the Times was having its grand debate about the wisdom of white pollsters, there was a five-alarm-fire report in The Washington Post highlighting Black organizers, on the ground in Georgia, who are having difficulty justifying the Democrats’ total inaction on issues of racial and social justice. The Post interviewed 20 advocates and activists in Georgia, the state that gave Democrats two senators and its electoral votes in 2020. These people warned that “frustration is at an all-time high” in the Black community there.

Personally, I think it is bonkers that there is a serious debate within the Democratic Party about whether it should listen to a data analyst who has never won a goddamn thing, or 20-odd people on the ground who won freaking Georgia, but you know how it goes: If a white man says it, it must be taken seriously.

But this is where Shor’s prescription really meets the road, because if he’s right, then the thing the Democrats should do is to continue frustrating and depressing the Black people who won Georgia in hopes of attracting additional non-college-educated white support in the state. Instead of taking aggressive measures to show the Georgians of color that their herculean efforts were worth something, the party should be very careful to do nothing to piss off white Georgians and distance themselves from the issues and causes Black Georgians voted for.

What does a Shor-style strategy look like? I’d argue we’ve already seen it. When we saw images of Border Patrol agents whipping Black Haitian refugees at the border, we were seeing what it looks like when the Democrats cater to voters who “do not see the world in the way that the people who staff and donate to Democratic campaigns do.” Biden’s response to those images, scolding the agents who conducted the beatings but touting how many Haitians he’s deported, could have been taken right out of the Clinton triangulation playbook. Beating Haitians while beaming about mass deportation is probably the exact kind of policy that makes Biden tolerable to non-college-educated voters in swing states.

Such policies make it extremely hard to convince first generation Haitians in Miami to vote for Democrats, which is the kind of thing that puts Florida perpetually just out of reach. But there’s an even more obvious problem with these type of white appeasement strategies: Democrats will never out-racist the modern Republicans in the eyes of racists.

Biden, I’m sure, genuinely feels bad that some Black refugees got whipped into a river on his watch. He’s not, you know, going to do anything to stop it, but I believe he’s enough of a human to feel sorry about it. Republicans, meanwhile, tell their voters to be proud of that kind of violence. Republicans tell their voters to gorge themselves on their hate and revel in the suffering their policies cause. It’s them or us, so white replacement theory goes. Republicans have turned bigotry and racism into a badge of honor and patriotism.

The swing voter Shor speaks of will always gravitate toward Republicans offering white pride over the Democrat offering racism as a guilty pleasure.

That’s why, even operating with the same basic facts about white America that Shor is—a majority of white voters are racist and will punish Democrats for being insufficiently so—it’s possible to draw a completely different electoral conclusion. The only way out is up: Democrats have to turn out every Black or brown voter they can find; they have to turn out every white college educated voter who rejects bigotry; and they have to ensure that those voters will have frictionless access to the ballot and that their votes will actually be counted. Some of those voters of color will vote Republican, of course, but healthy majorities will vote for Democrats if Democrats give them something to vote for. Overpowering Republicans with enthusiasm and turnout is the only way to beat them, because trying to appease them is both morally intolerable and strategically foolish.

Shor would have us believe that by not addressing Black concerns, by refusing to deliver on promises to fix the election system, the immigration system, and the police system, Democrats are actually helping themselves attract white voters and, counterintuitively, shoring up support from non-college-educated Black people. Don’t believe him. Clinton, the last guy who pulled this off, saw his approval rating with Black people at 85 percent in February 1998, a month after the Monica Lewinsky scandal broke. According to Pew Research, Biden’s approval rating among Black folks has plummeted to 67 percent. If that was the level of Black support Biden had in 2020, he’d have lost so hard, white domestic terrorists would be bored.