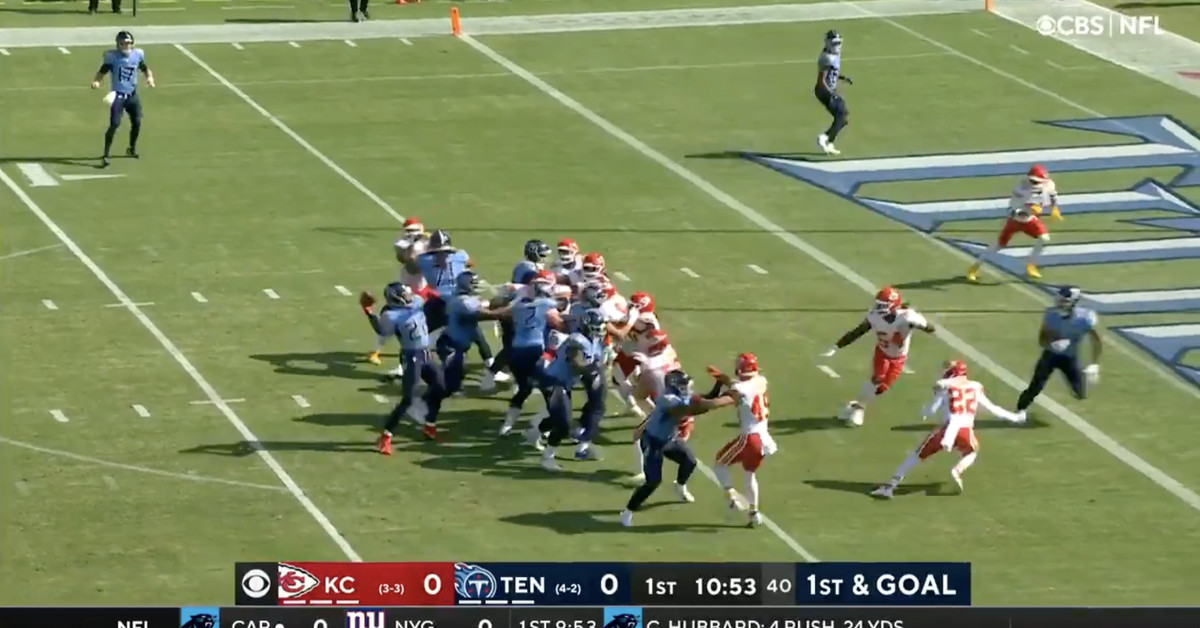 Derrick Henry has put himself on the short list of NFL MVP candidates so far as the season continues to push to the halfway point. Heading into the Tennessee Titans’ Week 7 game against the Kansas City Chiefs, the star running back had already scored 10 rushing touchdowns while gaining at least 100 yards on the ground in five of his six games. He was coming off back-to-back three touchdown performances.

The biggest problem with Henry’s MVP case? A running back almost never wins the award. Since 2001, a running back has won MVP exactly three times, with Adrian Peterson’s 2012 MVP marking the last time a non-quarterback had won the award.

As the Titans raced to a shocking 27-3 beatdown of the Chiefs, Henry continued to build his MVP resume. In a game where Henry failed to rush for 100 yards (he finished with 86) and didn’t find pay dirt on the ground, he still found a way to get in the end zone by passing for a touchdown.

The Titans snapped the ball to Henry near the goal line, and he threw a leaping five-yard touchdown pass to MyCole Pruitt for the Titans’ first score of the day.

This is the second passing touchdown of Henry’s career. His first was also on a Tim Tebow-like jump pass against the Ravens in the AFC playoffs in Jan. of 2020.

The reaction around the internet was swift after Henry’s touchdown toss: if throwing touchdowns is a prerequisite for an MVP, Henry can now cross that off the list.

“You’ve got to be a quarterback to win MVP.”
Derrick Henry: ok I can do that

Per NFL Research, Henry is the second player to ever have 10 rushing touchdowns and a passing touchdown in the first seven games of the season in the Super Bowl era. The other? LaDainian Tomlinson in 2005. Tomlinson actually passed for three touchdowns in 2005, and threw two more touchdowns when he won MVP in 2006.

Can Henry actually win MVP? Right now, the award might be Kyler Murray’s to lose with the Arizona Cardinals’ surprising 7-0 start. Tom Brady is going to be in the mix, too. After that, Henry’s case is as strong as anyone’s, especially with the Titans off to a 5-2 start.

The best thing about Henry’s TD pass? Titans opponents now have to worry about him throwing the ball when Tennessee gets near the goal line. That should open the door for even more rushing touchdowns.