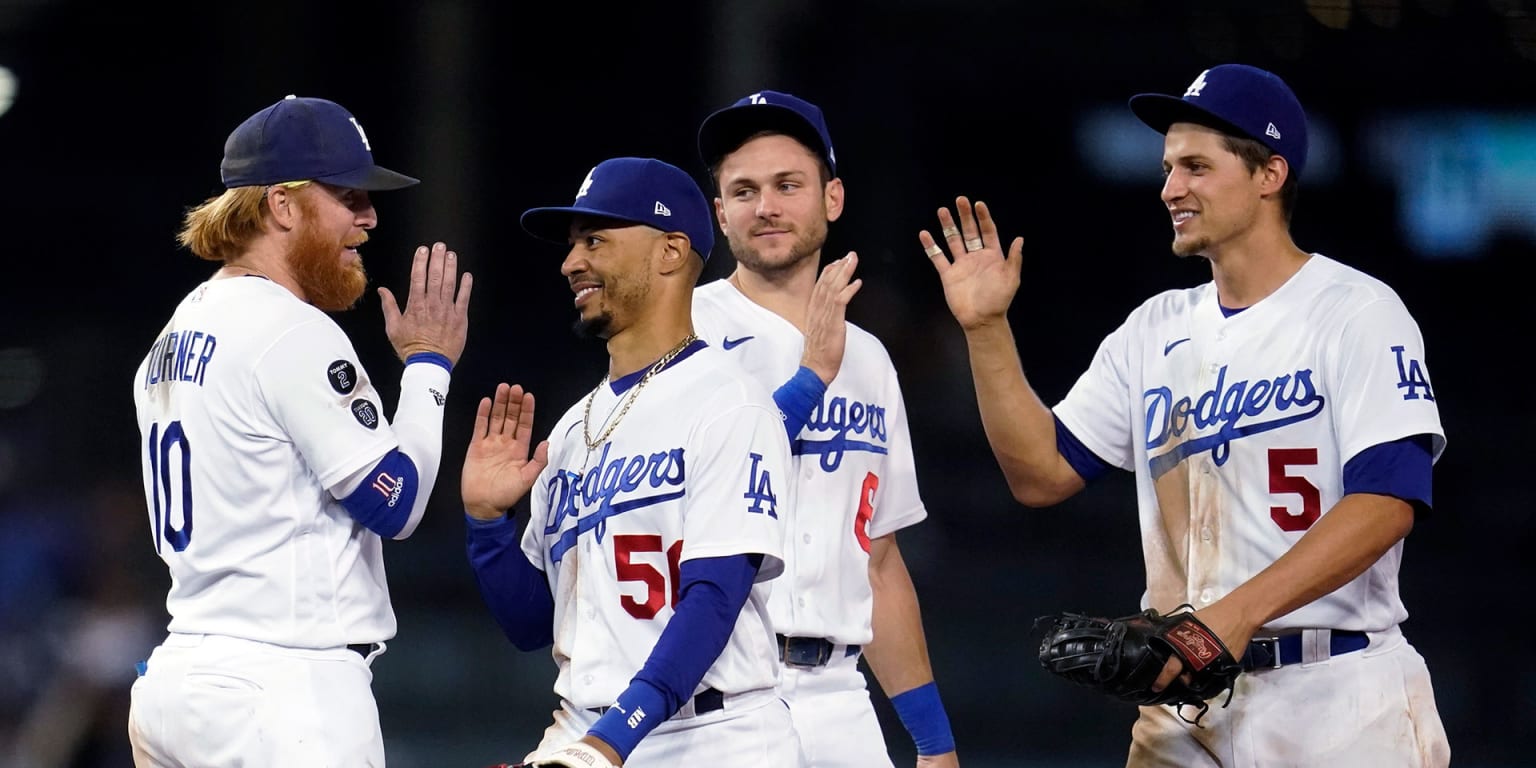 LOS ANGELES — While the Dodgers won a World Series title in 2020, they were left wanting more.

Because of all the health and safety protocols in place, the Dodgers weren’t able to celebrate their title quite like previous champions. There were no in-person talk show appearances, no champagne showers and no championship parade through the streets of Los Angeles.

Winning back-to-back titles served as enough motivation for the Dodgers heading into this season, but the lack of normalcy in 2020 certainly fueled their desires to try to win another title and do all the things they weren’t able to do last year.

With an 8-4 win over the D-backs on Tuesday at Dodger Stadium, paired with losses by the Padres and Reds, the Dodgers took their first step in their quest to repeat, clinching their ninth consecutive postseason berth.

Despite securing a playoff spot, though, the Dodgers’ focus is on winning the National League West for a ninth straight season. That’s become more difficult than anticipated, as the Dodgers remain 2 1/2 games behind the Giants with 16 games left in the regular season.

With their sights set on bigger achievements, the Dodgers didn’t hold an on-field celebration after securing the final out. They also didn’t have a full-blown champagne celebration. Instead, third baseman Justin Turner and manager Dave Roberts were among the people to share a message during a champagne toast inside the home clubhouse.

“We did a little champagne toast, said a few words and acknowledged the fact that this is a big accomplishment and you don’t ever want to get jaded and not appreciate getting to the postseason because it’s not a rite of passage,” Roberts said. “We acknowledged that. We also acknowledged that we have a lot of work to do and this is just the beginning.”

It was certainly fitting that the Dodgers got a solid performance from a starting pitcher on the night they clinched a postseason berth. The pitching staff has been the backbone of this Dodgers team. It was again on Tuesday.

Tony Gonsolin made his second start since coming off the injured list and looked sharp. The right-hander has battled shoulder issues this season, but looked more like himself against the D-backs, striking out six over five scoreless innings of work.

But perhaps the most encouraging part of Gonsolin’s outing was the fact that his velocity was reminiscent of the type of pitcher he was during his breakout 2020 season. Gonsolin averaged 94.8 mph on the four-seam fastball, up 1.3 mph from his season average. That could be a clear reflection that Gonsolin’s shoulder issues could be behind him.

“I was definitely just way more efficient today,” Gonsolin said. “I’ve been kind of grinding with the team the whole year, personally, but to be able to contribute to it makes me feel a lot better.”

With Gonsolin now showing signs of his old self, the Dodgers now have a legitimate five-man rotation that could lead them to even more postseason success. Walker Buehler, Max Scherzer and Julio Urías have been the driving force, but now Gonsolin and Clayton Kershaw are ready to contribute. Over their last five games, the Dodgers’ rotation has allowed just three earned runs over 31 1/3 innings of work.

With the amount of talent on the roster, the Dodgers were always expected to reach this point. However, nobody quite expected this season to turn out the way it has.

Kershaw and Gonsolin missed a large chunk of the season. Mookie Betts hasn’t been fully healthy since the beginning of the year. Trevor Bauer has been gone since July after being placed on paid administrative leave. Scherzer and Trea Turner came over in one of the most shocking Trade Deadline deals ever. In total, the Dodgers have used 61 players, the most in franchise history dating back to its Brooklyn days.

It’s been a long journey, even for a team that knew celebrating a postseason berth would come at some point. But it was business as usual on Tuesday for the Dodgers. They hope the real celebrations come in October, something they’ve been waiting for since last year’s World Series.

“We like our team, like where we’re at, the way we’re playing right now,” Turner said. “It’s about taking it one game at a time, controlling what we can control and what’s in front of us.”