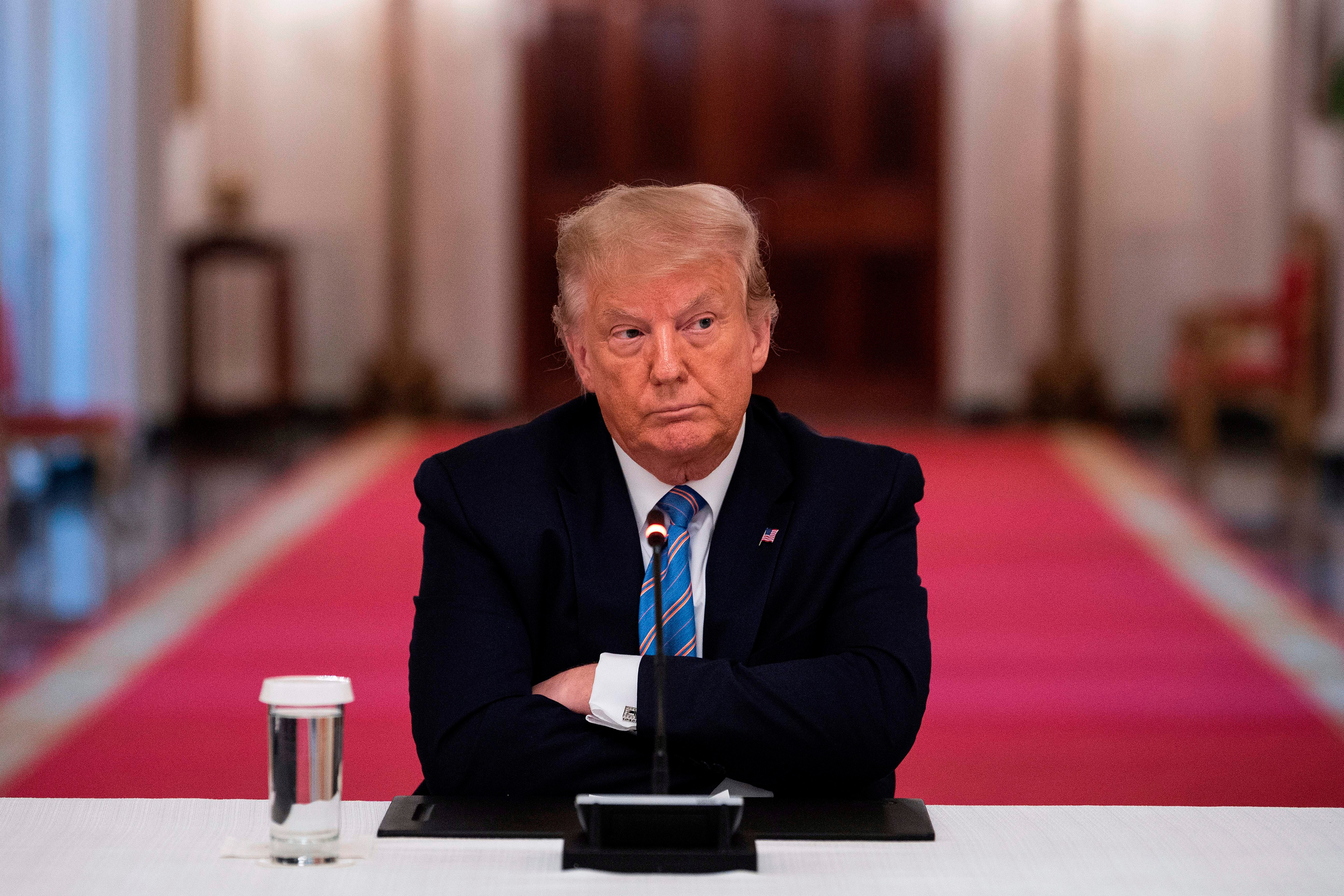 Remember when Donald Trump was permanently banned from Twitter and “indefinitely” suspended from Facebook following the attack of the Capitol on January 6? Well, a variety of other platforms followed suit, either by banning Trump completely or using other methods to stop extremist Trump supporters from planning further riots or spreading misinformation about voter fraud.

Here’s a list of social media and tech companies that took action against Donald Trump.

On January 9, Amazon removed Parler, the social media app described as “Twitter without rules,” from its cloud hosting service, Amazon Web Services. Parler is used by many vocal extremists and conspiracy theorists—reportedly including at least one of the Trump supporters who died during the Capitol riot. This means Parler will go offline by the evening of January 10 unless they find another hosting service.

“Recently, we’ve seen a steady increase in this violent content on your website, all of which violates our terms,” the AWS Trust and Safety team emailed Parler chief policy officer Amy Peikoff, per Buzzfeed News. “It’s clear that Parler does not have an effective process to comply with the AWS terms of service.”

This came after Google and Apple removed Parler from their respective app stores. In a text to The New York Times, Parler CEO John Matze wrote, “Big tech really wants to kill competition and I have a lot of work to do in the next 24 hours to make sure everyone’s data is not permanently deleted off the internet.”

On Friday, January 7, Apple threatened to remove Parler from its app store, giving the platform 24 hours to submit a plan for “moderation improvement.” By the evening of January 9, the app was officially pulled.

“We have always supported diverse points of view being represented on the App Store, but there is no place on our platform for threats of violence and illegal activity,” an Apple representative said in a statement, per CNBC. “Parler has not taken adequate measures to address the proliferation of these threats to people’s safety. We have suspended Parler from the App Store until they resolve these issues.”

On January 8, Discord, an instant messaging and chatroom app popular with teens, banned a server called TheDonald.win, according to Mother Jones reporter Ali Breland. “While there is no evidence of the server being used to organize the Jan 6 riots, Discord decided to ban the entire server today due to its overt connection to an online forum used to incite violence and plan an armed insurrection in the United States,” a Discord rep said in a statement to Breland.

According to Mother Jones, TheDonald.win is a copy of a toxic message board called r/The_Donald, which was banned on Reddit back in June.

Facebook locked the president’s account on January 6, starting with a 24-hour window. By January 7, Mark Zuckerberg explained the decision as well as extended the block on Trump’s accounts “indefinitely and for at least the next two weeks until the peaceful transition of power is complete.”

On June 4, it was announced that the suspension will last for two years, starting from the initial ban on Jan. 7. “Given the gravity of the circumstances that led to Mr. Trump’s suspension, we believe his actions constituted a severe violation of our rules which merit the highest penalty available under the new enforcement protocols,” Nick Clegg, vice president of global affairs for Facebook, said in a statement.

According to Facebook, Trump’s suspension will not automatically be lifted once the two-year period comes to a close. The company claims they will “look to experts to assess whether the risk to public safety has receded.”

Trump was not happy about this. “Facebook’s ruling is an insult to the record-setting 75M people, plus many others, who voted for us in the 2020 Rigged Presidential Election,” Trump said in the statement, per ABC News. “They shouldn’t be allowed to get away with this censoring and silencing, and ultimately, we will win. Our Country can’t take this abuse anymore!”

Unlike Apple, Google didn’t waiting to ban Parler from the Google Play store. “We’re aware of continued posting in the Parler app that seeks to incite ongoing violence in the U.S.,” a Google spokesperson said, per CNN. “We recognize that there can be reasonable debate about content policies and that it can be difficult for apps to immediately remove all violative content, but for us to distribute an app through Google Play, we do require that apps implement robust moderation for egregious content. In light of this ongoing and urgent public safety threat, we are suspending the app’s listings from the Play Store until it addresses these issues.”

Though Trump does not have a Pinterest account, the image-sharing app has reportedly been limiting pro-Trump-related topics since around November 2020. For example, if you search StoptheSteal, you will see the following message: “Pins about this topic often violate our community guidelines, so we’re currently unable to show search results.”

“Pinterest isn’t a place for threats, promotion of violence or hateful content,” a Pinterest spokesperson said, according to Axios. “Our team is continuing to monitor and removing harmful content, including misinformation and conspiracy theories that may incite violence.”

As of January 8, Reddit banned the subreddit group r/DonaldTrump, according to Axios. “Reddit’s sitewide policies prohibit content that promotes hate, or encourages, glorifies, incites, or calls for violence against groups of people or individuals. In accordance with this, we have been proactively reaching out to moderators to remind them of our policies and to offer support or resources as needed,” a spokesperson said. “We have also taken action to ban the community r/donaldtrump given repeated policy violations in recent days regarding the violence at the U.S. Capitol.”

Per Variety, the forum had about 52,000 members before it was shut down.

In perhaps the boldest move of all, Shopify removed Trump’s official campaign merchandise from its platform by disabling his online stores, trumpstore.com and shop.donaldjtrump.com. “Based on recent events, we have determined that the actions by President Donald J. Trump violate our Acceptable Use Policy, which prohibits promotion or support of organizations, platforms or people that threaten or condone violence to further a cause,” said Shopify on January 7, per CBS News.

Trump was suspended from Snapchat amid the riots on January 6, a spokesperson confirmed to The Hill.

Snapchat previously stopped promoting Trump’s account on its Discover page in June 2020. “We are not currently promoting the president’s content on Snapchat’s Discover platform,” a Snap spokesperson told Business Insider at the time. “We will not amplify voices who incite racial violence and injustice by giving them free promotion on Discover. Racial violence and injustice have no place in our society and we stand together with all who seek peace, love, equality, and justice in America.”

Oh, how the tables have turned. Remember when Trump tried to ban TikTok? Well, even though Trump does not have an account of his own, the video platform still found a way to limit his reach. On January 7, TikTok confirmed it would be removing videos of Trump’s speeches believed to have incited violence at the Capitol. Furthermore, it is redirecting hashtags used by rioters like #stormthecapitol and #patriotparty to its community guidelines.

However, the company has not specified that it would ban Trump should he try to join the platform.

Of course, this is unlikely given his previous stance and the fact that he joined its competitor Triller back in August.

On January 7, Twitch, the Amazon-owned live-streaming video platform made popular by gamers, disabled Trump’s account indefinitely. “In light of yesterday’s shocking attack on the Capitol, we have disabled President Trump’s Twitch channel,” a spokesperson told TechCrunch. “Given the current extraordinary circumstances and the president’s incendiary rhetoric, we believe this is a necessary step to protect our community and prevent Twitch from being used to incite further violence.”

“As we’ve said, using another account to try to evade a suspension is against our rules,” a spokesperson for Twitter told People in a statement. “We have taken steps to enforce this with regard to recent Tweets from the @POTUS account. For government accounts, such as @POTUS and @WhiteHouse, we will not suspend those accounts permanently but will take action to limit their use.”

On January 7, YouTube revealed a multistep plan to stop the dangerous spread of misinformation. “Due to the disturbing events that transpired yesterday, and given that the election results have now been certified, starting today any channels posting new videos with false claims in violation of our policies will now receive a strike,” the company tweeted.

Though channels previously received a warning before they were suspended for violating YouTube’s guidelines, they will now be suspended immediately. If they receive three strikes within a 90-day period, the channel will be permanently removed.

This page will be updated if/when more companies remove Trump from their platforms.