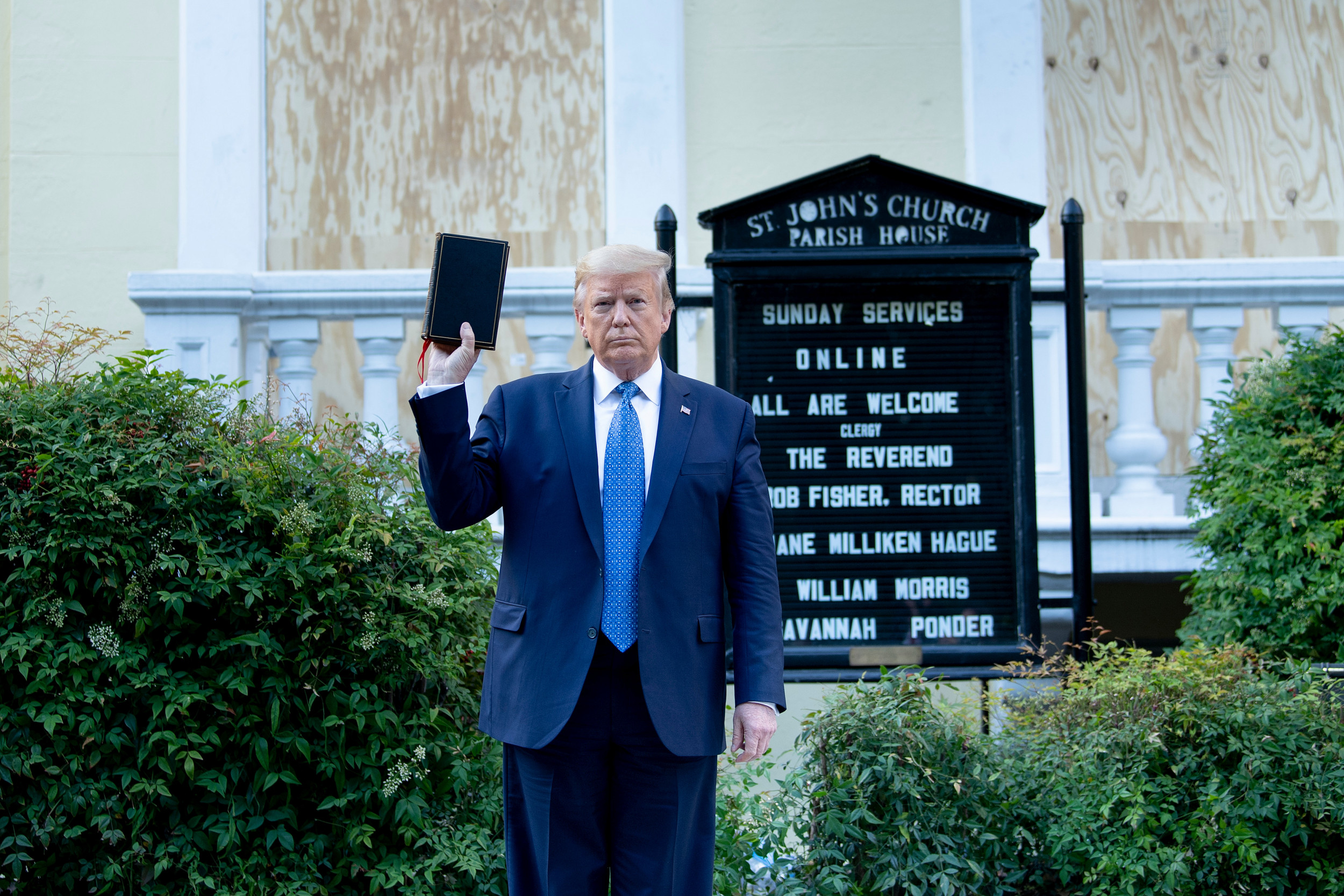 Former President Donald Trump released a statement Wednesday praising the Interior Department’s inspector general for “Completely and Totally exonerating me in the clearing of Lafayette Park!” — referencing, without explicitly saying so, an incident last year that his critics characterized as a photo opportunity for him.

On June 1, 2020, federal police officers cleared Black Lives Matters demonstrators during a protest from Washington D.C.’s Lafayette Park. Trump was photographed holding a Bible at St. John’s Church after the protesters were removed.

Wednesday’s report from the Interior Department’s inspector general, Mark Greenblatt, found that people were moved so a contractor could install fencing, rather than a moment of political theater.

“The evidence we obtained did not support a finding that the USPP [U.S. Park Police] cleared the park to allow the President to survey the damage and walk to St. John’s Church,” said the report.

It did note, however, that then-U.S. Attorney General William Barr urged officials to speed up the clearing process so that Trump could walk through the area.

Greenblatt also noted that the firing of pepper balls by Bureau of Prisons officers was “inconsistent with the guidance” by the incident commander. The Bureau of Prisons officers arrived late to the scene on that June day last year and were said to have missed a briefing in which police were told not to use pepper ball munitions unless protesters breached the bike racks used as barricades around the closed-off area.

Video evidence showed a Bureau of Prisons officer firing pepper balls from inside the park, while protesters are seen to be outside the barricades.

The investigation by the inspector general’s office was conducted at the request of former Interior Secretary David Bernhardt and lawmakers. The report reviewed actions taken by the U.S. Park Police (USPP), which operates under the Interior Department’s jurisdiction through the National Park Service.

It was noted in the report that the investigation did not evaluate “individual uses of force by USPP officers,” which are “the subject of separate inquiries or ongoing lawsuits.”

“As we have said all along,” the former president said, “and it was backed up in today’s highly detailed and professionally written report, our fine Park Police made the decision to clear the park to allow a contractor to safely install antiscale fencing to protect from Antifa rioters, radical BLM protestors, and other violent demonstrators who are causing chaos and death to our cities. In this instance, they tried burning down the church the day before the clearing. Fortunately, we were there to stop the fire from spreading beyond the basement—and it was our great honor and privilege to do so. Again, thank you to the Inspector General!”

Update 06/09/21 4:35 p.m. EDT: This story has been updated to include more details from the inspector general’s report.