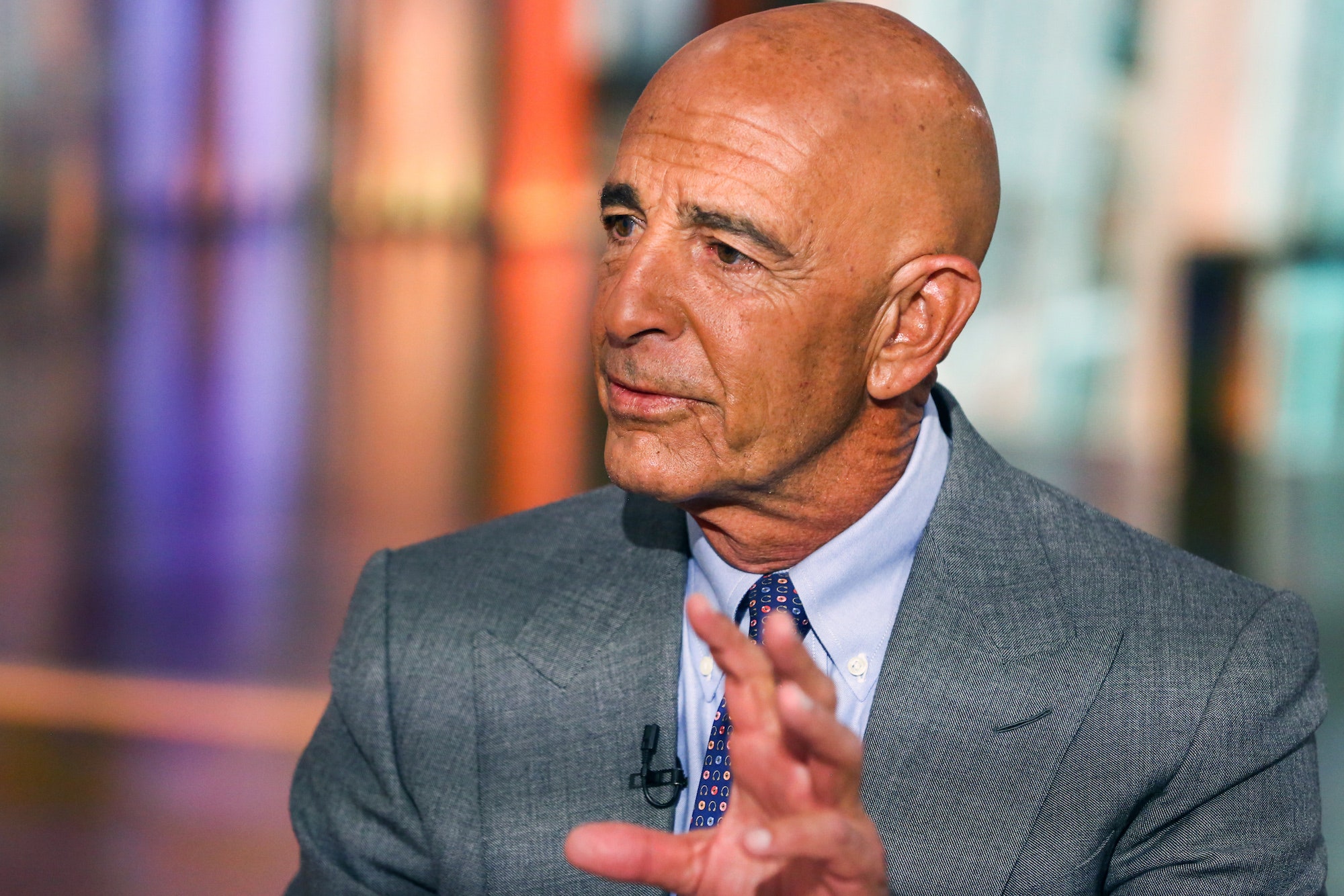 Back in 2015, when Donald Trump was merely a candidate for office, he made a bold claim, telling The Washington Post, “I’m going to surround myself only with the best and most serious people.” It’s a claim that would have held up if “best and most serious people” were actually code for “a collection of fuck-ups, racists, and criminals,” though of course Trump meant “best” in the actual sense. Instead, in the years since, more than half a dozen of the 45th president’s associates have been arrested or convicted of a crime, and apparently, the number continues to grow!

On Tuesday morning, billionaire Thomas Barrack, one of Trump’s closest friends, was arrested in the Los Angeles area and charged with violating foreign-lobbying laws, making false statements, and obstructing justice. According to the Post, the financier was indicted on charges related to his dealings in the United Arab Emirates. He and two other defendants have reportedly been accused of “acting and conspiring to act as agents of the UAE between April 2016 and April 2018.” Officials also claimed that Barrack lied to FBI agents in 2019 while being questioned about his dealings with the UAE.

The 45-page indictment charges Matthew Grimes, an employee of Barrack’s investment firm, with helping in the lobbying effort. Grimes was also arrested, officials said. A third man charged in the scheme, Rashid Alshahhi, is a citizen of the UAE who lived for a time in California. Attorneys for Barrack and Grimes did not immediately respond to messages seeking comment. Officials said Alshahhi remains at large; an attorney for him could not immediately be identified.

Officials said that the lobbying effort began as Trump was sewing up the GOP primary nomination in the spring of 2016 and that Barrack “took steps to establish himself as the key communications channel for the United Arab Emirates to the Campaign.” A real estate titan who became wealthy buying out-of-favor assets, Barrack was one of Trump’s closest associates during the campaign and in office, regularly speaking to the former president, visiting him, and channeling him to others, including business officials and leaders in foreign countries…. Federal prosecutors say Barrack capitalized on his access to Trump and other high-ranking government officials, and his relationships with U.S. journalists, to “advance the policy goals of a foreign government without disclosing their true alliances.” On a number of occasions, the Justice Department alleged, Barrack pushed the interests of the UAE to the Trump administration without disclosing that he was working on the country’s behalf.

On a seemingly unrelated but crucial note, Barrack chaired Trump’s 2016 inaugural committee, which is currently under criminal investigation by D.C. attorney general Karl Racine. Racine sued the Trump Organization, the Trump International Hotel, and the inaugural committee in January 2020, alleging the groups funneled large amounts of inauguration cash into the first family’s pockets via the hotel. Both Donald Trump Jr. and Ivanka Trump have sat for depositions related to the probe, seeming to have misled investigators about their involvement in the planning of the inaugural events. After the lawsuit was filed, the Trump Organization said in a statement that it was “a clear P.R. stunt” and that “the rates charged by the hotel were completely in line with what anyone else would have been charged for an unprecedented event of this enormous magnitude and were reflective of the fact that [the] hotel had just recently opened, possessed superior facilities, and was centrally located on Pennsylvania Avenue.”

Barrack joins a long, ignoble list of Trump associates, advisers, and friends who’ve found themselves on the wrong side of the law. In April, Rudy Giuliani had his home and office raided as part of criminal investigation into his Ukraine dealings. Giuliani is also reportedly the subject of a DOJ investigation into alleged foreign lobbying for Turkey. (Giuliani has denied lobbying on behalf of both Ukraine and Turkey.)

And then, obviously, there’s Trump, who is the subject of no fewer than four criminal investigations and whose company and CFO were hit with more than a dozen charges earlier this month, all of which they pleaded not guilty to. At the moment Trump has not been personally charged with any crimes—but that may change!

Something you should know about Donald Trump, besides the part about him being an unhinged maniac who reportedly spends his days crashing memorial services and telling people he’s going to be president again by August, is that he‘s had a longtime unrequited obsession with Tom Brady. “He’s a friend of mine, he’s a great guy, and he’s a great athlete obviously, but he’s a winner…. I think Tom is totally innocent,” Trump told TMZ in 2016, referring to Deflategate. “I know him, he’s such an honorable guy, and I’m with him all the way.” According to his ex-wife’s memoir, Trump wanted Ivanka to date Brady, telling her, “You have to meet him,” and in the ensuing years has repeatedly expressed regret the quarterback isn’t his son-in-law, reportedly remarking to people that he “could have had Tom Brady” but instead “got Jared Kushner.” At one point, he reportedly “joked” to New England Patriots owner Robert Kraft that Kushner was “half the size of Tom Brady’s forearm.”

Brady, for his part, has never seemed 100% comfortable with Trump’s adulation, particularly after the real estate developer became president. The quarterback has declined to say who he voted for, and last year described his “friendship“ with Trump thusly:

“He would call me after games, ‘I watched your game, Tom, let’s play golf together.’ So 2003, 2004, that’s kind of the way it was.… He would golf, and then he became someone that—he would come up to our games and stand on the sideline. He would cheer for the Patriots. He always had a way of connecting with people, and still does.”

“But the whole political aspect came, and I think I got brought into a lot of those things because it was so polarizing around the election time. It was uncomfortable for me.”

When Brady declined to attend the celebration at the White House after winning the Super Bowl in 2017, Trump, like a crazed fan, reportedly spiraled. Per The Washington Post:

Trump grew angry in April 2017 when Tom Brady said he planned to skip the White House visit with the Patriots, huddling angrily with aides and even calling Patriots owner Robert Kraft. One former senior administration official described a chaotic scene unfolding over the heartlands of America, as Trump flew back from an event in Wisconsin. Trump made a number of calls and asked aides to help fix the situation, worried that Brady’s absence would reflect poorly on him.

Anyway, you get the idea: Trump is obsessed with Brady, and basically thinks the two of them are a couple of winners cut from the same cloth. So this little repartee seemingly referencing the ex-president’s refusal to accept his 2020 loss must have hurt:

Trump has not yet responded to the remarks, but we assume a statement will be forthcoming after his aides talk him down from the ledge by telling him, “We‘re sure Mr. Brady likes you a lot, sir!” and “No, sir, we don’t think Tom is spending the night at the White House,” and “Sir, the president‘s daughter is already married, you don’t need to worry about her marrying Mr. Brady and becoming Biden’s son-in-law.”

So just to be clear, they‘ve passed a bill eliminating a requirement for public schools to teach students that the KKK and its white supremacist reign of terror were “morally wrong.” Yes, that’s right: They don‘t like the bad rap the Ku Klux Klan has been getting. Per HuffPo:

The cut is among some two dozen curriculum requirements dropped from the new measure, along with studying Martin Luther King Jr.’s “I Have a Dream” speech, the works of United Farm Workers leader Cesar Chavez, Susan B. Anthony’s writings about the women’s suffragist movement, and Native American history. Critics say the state is promoting an “anti-civics” education.

Senate Bill 3—passed last Friday 18-4—drops most mentions of people of color and women from the state’s required curriculum. That includes eliminating a requirement that students be taught the “history of white supremacy, including but not limited to the institution of slavery, the eugenics movement, and the Ku Klux Klan, and the ways in which it is morally wrong.”

The new bill echoes language from last month’s law that bars teachers from requiring students to develop “an understanding” of the 1619 Project, which calls for a far more profound examination of the significance of slavery in American history. It also retains the language that teachers may not “be compelled” to discuss current events or “controversial issue[s] of public policy or social affairs” and that if they do, they can’t give “deference to any one perspective.”

Despite the fact that the bill literally means the KKK can be presented in a neutral fashion, without the suggestion that, for example, lynchings are wrong, Republican lieutenant governor Dan Patrick praised the legislation for supposedly rejecting “philosophies that espouse that one race or sex is better than another.” He added that parents “want their students to learn how to think critically, not be indoctrinated by the ridiculous leftist narrative that America and our Constitution are rooted in racism.” You hear that liberals? Texas is done with the crazy “narrative” that the KKK was bad!

“And thanks also to my tax attorneys for figuring out a way for me to pay zero in income taxes despite being a billionaire! That helped us get to where we are today too!”

“If anybody is lying here, senator, it is you,” Anthony Fauci tells Rand Paul in heated exchange at Senate hearing (CNBC)

— How Yulia Navalnaya Became Russia’s Real First Lady
— Rupert Murdoch Buried Trump’s Election Night Dreams in a Shallow Grave
— Ivanka Trump Is Next on the Chopping Block
— A Mass Labor Shortage Is Leaving Hamptonites to Fend for Themselves
— The Secret History of Gavin McInnes
— Trump and DeSantis Are on a Collision Course
— Inside the Rash of Unexplained Deaths at Fort Hood
— The Kushner Family Is Cozying Up to Nikki Haley
— From the Archive: Miami Beach, Waterworld
— Not a subscriber? Join Vanity Fair to receive full access to VF.com and the complete online archive now.