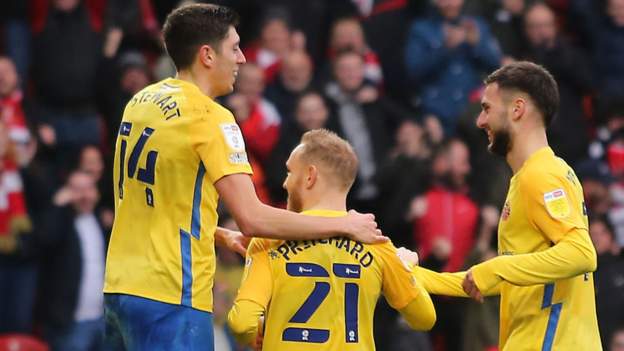 Sunderland moved up to second in League One with a comfortable victory at Doncaster Rovers.

Ross Stewart’s early penalty and one just before half-time from Elliot Embleton put them in control at the Eco Power Stadium.

An own-goal from Ben Blythe early in the second half completed the job as they cruised to three points.

Doncaster rarely threatened the Black Cats’ goal and remain in deep trouble in 23rd in the division.

The win takes Lee Johnson’s team just one point behind leaders Rotherham, who lost 1-0 at Accrington on Boxing Day.

This result was never in doubt from the moment Stewart scored his 12th of the season via the penalty spot after on-loan German Leon Dajaku had been tripped by Branden Horton.

Embleton had time and space in the area to make it two before youngster Blythe, making only his second league appearance, diverted Alex Pritchard’s flick into his own net.

Rovers are still six points from safety and this comprehensive loss was a blow to interim manager Gary McSheffrey’s hopes of landing the job on a full-time basis.

“We had to be professional today. We had to find some control and obviously the early goal did us a right favour.

“Then we left them off the hook a bit but the second goal was really good timing for us because it was getting a bit frustrating.

“It’s a really big three points. We had to capitalise on closing the gap (to leaders Rotherham) and we did.”