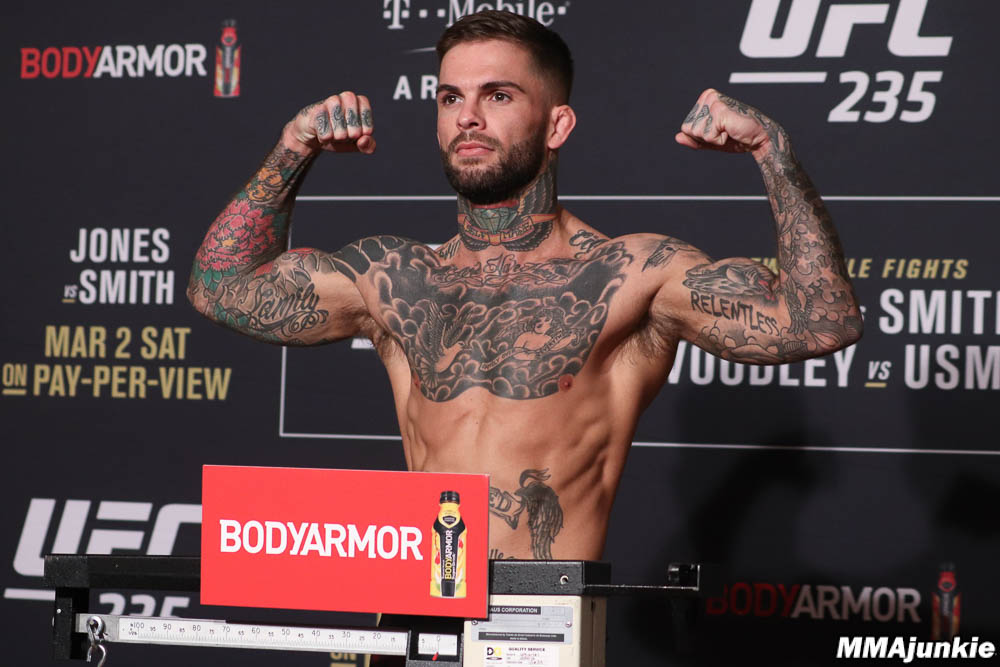 Cody Garbrandt’s nutritionist is confident his cut down to flyweight will be a smooth one.

“There are all the premises, there are all the right numbers to do well,” Capodaglio told MMA Junkie. “And we are still in a phase where, yeah, he started to drop weight for sure. It’s our first camp together. He never really worked with a nutritionist before, so we’re also working on creating a plan that is performance-based. So I’m teaching him how to eat in the sense that you want to periodize the carbohydrate intake in certain moments of the day, in certain moments of the week.

“There are days when you want to stimulate adaptation, so you’re going to eat a little bit less and you’re going to create physiological levels of stress to your body so you can react and become better. We say in science physiological stress induces adaptation. so we’re working on that. Some days he trains low and some other days he recharges and he performs – for example, when he has his sparring. He’s a big bicycle fan, so he rides the bike a lot and that is a big help when it comes to a drop of a weight class.”

Capodaglio won’t be cooking Garbrandt’s meals, but he’ll be breaking down the numbers, calorie intake, and providing recipes. Capodaglio said that to make the bantamweight limit, Garbrandt never had a diet regiment. So now that there’s some science behind his weight cut, the transition to flyweight should be seamless.

“He’s not a person that struggled to make 135 and is now going to try and do something impossible to make 125,” Capodaglio said. “To make 135, he was eating healthy, but there wasn’t a specific rationale behind it. Now we’re putting more order, and that already gives us some room for improvement and then we have a lot of time for this drop. He will be fueling very well until fight week, so don’t think about a 1500-kilocalorie diet. That’s not going to happen.

“He’s not going to aggressively dehydrate to make the weight. So by the time he’s going to fight, so in 30, sometimes 36 hours, he’s going to be fully hydrated. I will test his hydration. I test his urine density, and I’m pretty confident with my protocols they can fully hydrate and Cody is going to be fully rehydrated. I believe you’re really going to see a new Cody Garbrandt in the cage, and I’m not sugarcoating a reality, but I really see some new motivation. He sees his career, he sees his path in a different way, and I think that will translate to the cage when he fights in December.”