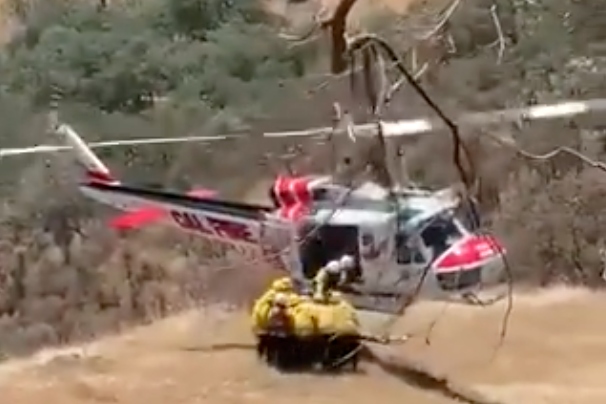 A driver was rescued Wednesday after a vehicle plunged 300 feet over a road near the Lick Observatory on Mount Hamilton in San Jose, Calif., officials said.

The San Jose Fire Department and the Cal Fire Santa Clara-Alameda-Contra Costa Unit responded to the incident just after 12:30 p.m. near Mount Hamilton Road west of the observatory.

A Cal Fire helicopter arrived on scene and lifted the patient to a medical helicopter for transport to the nearest helicopter, according to Cal Fire.

“Hover load was required due to the terrain and location of the patient,” Cal Fire said on Twitter.

Cal Fire shared a video showing the patient being put into the helicopter.

Cal Fire added, “Great job from all agencies that assisted with this rescue.”

The condition of the driver is unknown. It’s also unknown why the vehicle veered off the road.

Mount Hamilton rises 4,265 feet in the Diablo Range overlooking the Santa Clara Valley. Mount Hamilton Road snakes 19 miles around the mountain and is popular with cyclists and motorcylists. Traveling from San Jose to the mountaintop, the road rises over 4,000 feet with three major climbs. On a clear day, you can see  Mount Tamalpais, the Santa Cruz Mountains, Monterey Bay, and sometimes even Yosemite National Park from the summit of the mountain.