Skip to content
Latest News:
MLB playoff tracker: Who is in, who can clinch next and must-watch games
Woman shot 4 times outside of Brooklyn baby shower: NYPD
Teen attacked in apparent bias crime outside Chinese supermarket in Brooklyn 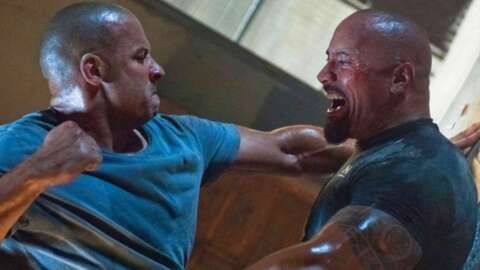 In a candid and wide-ranging interview, actor and former wrestler Dwayne “The Rock” Johnson has opened up to Vanity Fair about his politics, his feud with Vin Diesel, and his fraught relationship with his late father.

While none of these are exactly new topics that Johnson hasn’t been vocal about in the past, what’s noticeable in the article is that he is talking in more concrete terms about a potential president run. Johnson, who is coming off the success of launching a new Disney franchise in this summer’s Jungle Cruise, told the publication that “indicators are all very positive–in, for example, 2024, and in, for example 2028” that he will be making it official. Johnson did not specify which political party the run would be for, though he publicly endorsed Joe Biden and Kamala Harris for their 2020 run. For what it’s worth, WWE’s The Undertaker said he’d absolutely vote for Johnson.

Speaking to the previous speculation on the difficult relationship with his Fast & Furious co-star Diesel and an Instagram post seemingly calling him out, Johnson said, “Every single crew member found their way to me [after that post] and either quietly thanked me or sent me a note.” However, Johnson did voice some regret for airing their personal beefs over alleged unprofessional behavior in public. He also added that they have since made peace with one another.

Johnson has a lot of projects on the horizon–plenty to keep him busy until a potential presidential run. The DC movie Black Adam recently wrapped production ahead of its 2022 release, Johnson will play Superman’s dog in an upcoming animated movie, Netflix’s Red Notice hits the streaming service on November 12, and Jungle Cruise 2 was recently greenlit by Disney.