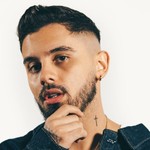 In 2018, Fuentes made noise globally with his Myke Towers-assisted hit, “Ajena.” The track caught the attention of Tainy, who recently surpassed 100 weeks at the top of Billboard’s Latin Producers chart. Once Tainy and his business partner Lex Borrero created the label NEON16, they tapped Fuentes to join its burgeoning roster.

With the support of a superstar producer like Tainy behind him, Fuentes isn’t solely using his platform to build his brand–he’s leveraging his voice for the good of his fans. In this year’s single “DF,” he opened up about his battle with anxiety and depression and highlighted the importance of mental health awareness.

Now, Fuentes is pushing the boundaries of Latin music and expanding his reach as an artist, recently teaming up with Swedish producer Concrete for the song “Drown in Me.” In an interview with Billboard, Fuentes talked about his journey as an artist, working with Daramola, and what to expect next.

This interview has been translated and edited for length and clarity:

Your first big hit was “Ajena” with Myke Towers. How did your world change after releasing that song?

Before “Ajena,” I was a little bit more focused on doing romantic trap. This song opened my eyes and made me feel confident, like, “Wow, bro, you can really get people in a club dancing to your music.” That collaboration was huge. I have a lot of admiration for Myke Towers. I feel like this song changed my career so much, and so far, it’s my biggest song in terms of numbers.

Recording this Netflix series was a dream for me. I enjoyed it so much. Acting comes to me in a very spontaneous way. I didn’t study it or anything. On the nights before [I arrived to set], I didn’t read or memorize anything, but everything stayed with me. It was like I was already the character, and everything flowed. I don’t want to do any acting [right now] because I have all my energy directed towards music, but I feel like down the road, I will. After 35, I want to do my own series with my best friend about our lives.