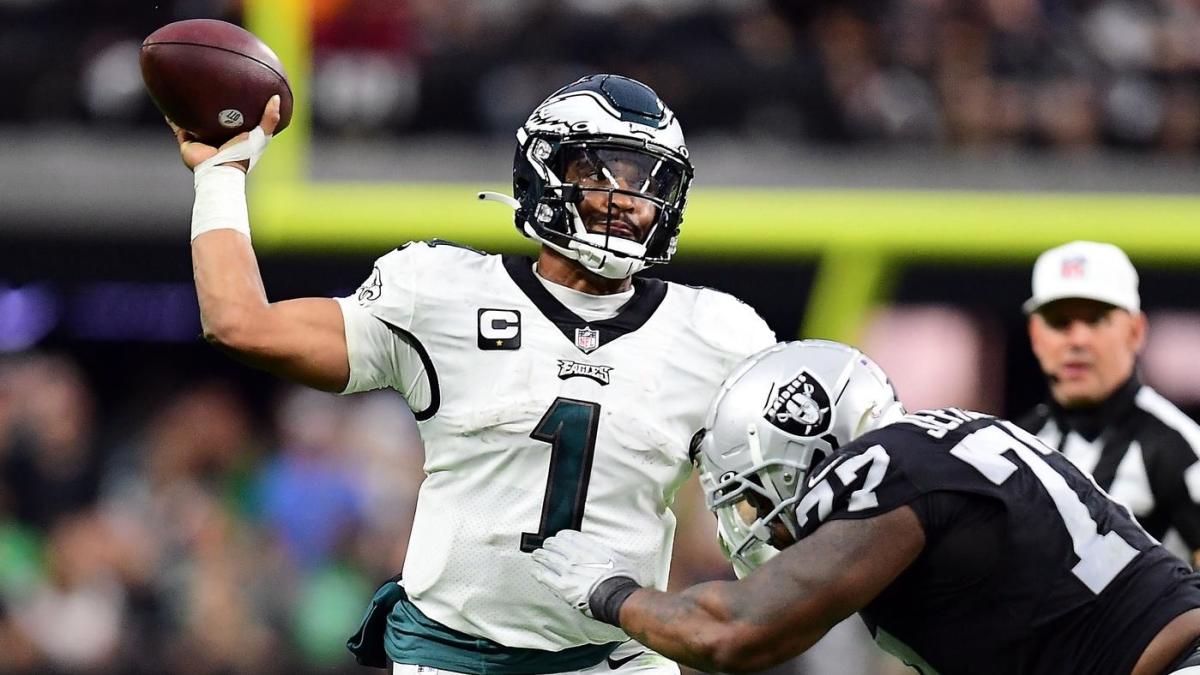 Another ugly loss for the Philadelphia Eagles raises more questions than answers with the direction of this franchise. Can Nick Sirianni fix everything that’s broken? Will Jonathan Gannon adjust his defensive scheme? Do the Eagles really know what they have in Jalen Hurts?

The Eagles have enough issues to address in the coming days as they are clear sellers with the trade deadline approaching. Stock isn’t worth investing in this Eagles team right now, even if there are some positives to take away from Sunday’s embarrassing loss — and one major negative.

Finally getting the opportunity to be a No. 1 tight end, Goedert took advantage on the Eagles’ first series of the game. He hauled in a 24-yard pass from Hurts which led to an Eagles touchdown in the opening minutes, showcasing the playmaker he can be in the middle of the field.

Goedert led the Eagles with 70 receiving yards on three catches, averaging 23.3 yards per catch. Expect the Eagles to target Goedert more the rest of the season as they determine whether he’s worth the massive extension this offseason — either from Philadelphia or some other team.

The Eagles’ cornerbacks have been good this year — and Maddox turned in another strong performance. He allowed just four catches (on five targets) for 20 yards and Derek Carr had just a 43.8 passer rating and an interception targeting him.

Gannon’s defensive scheme isn’t great, but it’s helping Maddox earn a nice contract this offseason. The Eagles would be wise to keep Maddox in the fold as the slot cornerback.

Miles Sanders will be out a few weeks with an ankle injury, which means Gainwell gets his opportunity as the No. 1 running back. There were some ups and downs Sunday, as Gainwell finished with five carries for 20 yards and four catches for 41 yards and a touchdown, averaging 6.78 yards per touch.

Seeing what the Eagles can do with Gainwell will be interesting, though his fumble late in the second quarter on the first play from scrimmage after a Vegas touchdown was concerning. If Gainwell can secure the football, he adds an interesting dimension to the Eagles offense.

Gainwell probably isn’t a No. 1 running back, but it’s worth giving him a shot.

Another inconsistent day at the office for Hurts, who finished 18-of-34 passing for 236 yards with two touchdowns and no interceptions (94.7 rating) and had 13 carries for 61 yards — the majority of his stats coming when the game was out of hand at 30-7. This isn’t including the inexcusable fumble in the second half.

Accuracy issues have plagued Hurts, who is 28th in the NFL in completion percentage, 16th in passing yards, 20th in touchdown percentage, 22nd in yards per attempt, and 22nd in quarterback rating. Hurts isn’t a bad quarterback, but he’s not a good one, either. Hurts does add an extra dimension as a runner, which the Eagles do need to use better in the coming weeks.

Sirianni isn’t putting Hurts in the best position to succeed, which is part of the problem. There’s no reason to bench Hurts for Gardner Minshew, but the recent trade of Joe Flacco, which places Minshew as the backup, demonstrates the leash is getting shorter on Hurts as the starter — fair or not.

Hurts deserves the whole season to see if he can improve. Will the coaching staff be patient enough to allow that, especially if their jobs may be on the line?

Mailata’s return to left tackle wasn’t good, as he was bullied around by Yannick Ngakoue all afternoon. As Hurts was running for his life, Mailata allowed seven pressures on the day — including one sack.

The Eagles had their best offensive tackles back with Mailata and Lane Johnson, yet the tackles allowed a combined 10 pressures and were overmatched by the Raiders defensive ends. Mailata is a young player who is still coming into his own, so these performances are expected.

Sunday’s matchup against the Lions will be worth monitoring. Could a Mailata bounce-back game be in store, or is his knee injury still lingering?

The Eagles gave Taylor the start at linebacker, yet Carr picked on him all afternoon. Gannon’s scheme plays a large role in Taylor’s struggles, but athleticism couldn’t made up for the poor pass coverage. Taylor was targeted four times and gave up four completions for 61 yards — allowing 29 yards after the catch.

Taylor played 36 snaps and also struggled against the run. The Eagles just don’t have a linebacker who can excel in Gannon’s scheme, which is on the defensive coordinator to change. Too early to write off Taylor, but Sunday’s game was a concern for the 2020 third-round pick.

Sanders finally gets his opportunity to shine with five carries on the Eagles’ first drive — which led to a touchdown. Then came the ankle injury that will sideline him multiple weeks, right when Sirianni decided to revolve a game plan around him.

Whether it’s lack of touches or injuries, the Eagles running back just can’t catch a break. Sanders is the cog who can make the Eagles offense go if given the opportunity. He won’t be getting that chance for a few weeks, a huge setback for this team going forward.